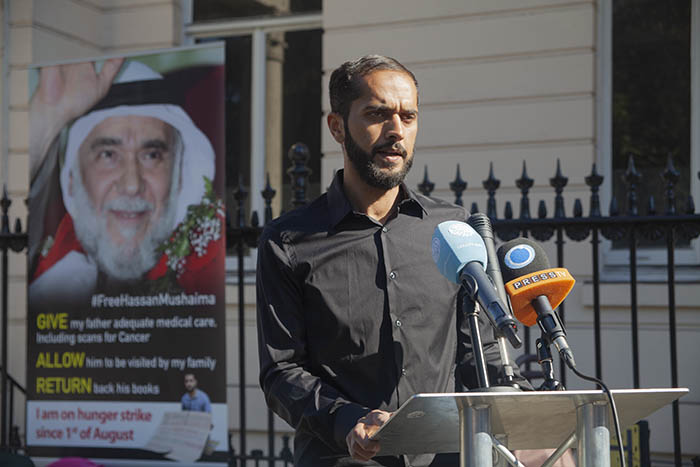 At a press conference outside the Bahraini Embassy in London on 13 September, Bahraini human right activist Ali Mushaima vowed to continue fighting for his 70-year-old father Hassan Mushaima, who was imprisoned in 2011 as part of a crackdown on political activists in the country.

Mushaima said: “After 44 days many friends have argued for me to end my hunger strike. I even received a message from Nabeel Rajab in prison. But what affected me the most was my father telling me how scared he was that there I was hospitalised. I will not end my hunger strike but I will start a liquid diet that will include soups. My body needs to recover but if my father’s basic rights are not met, which is full medical care, family visits and access to books, I’m ready to resume my full hunger strike not because it’s easy and not because it is life-threatening, but because I will never stop fighting for my dad and for our cause.”

Human rights activist Zainab Al Khawaja, who has joined Mushaima’s demonstration after travelling from Denmark, was thanked for her solidarity. Khawaja’s activism has seen her arrested twice in Bahrain, once while pregnant and once with her infant son. Like Hassan Mushaima, Al Khawaja’s father, Abdulhadi Al Khawaja, faces possible life imprisonment.

Outside the Bahraini Embassy, Mushaima also expressed his gratitude towards MPs such as Caroline Lucas and Ian Blackford for raising his father’s case and shedding light on the suffering of political prisoners in Bahrain. His strike has garnered global recognition, going as far as being mentioned by the Human Rights Council in Geneva.

The British Government’s decision to support “false” statements made by the Bahraini Government was highlighted by Mushaima. He believes the UK has been part of the problem rather than the solution, alleging Britain has spent millions of pounds of taxpayers’ money to train Bahrain police violence and to teach them how to whitewash their crimes. Last month Mushaima asked for the Queen’s assistance, citing her friendship with the king of Bahrain as one of the many ways she could help influence the case.

Andrew Smith, who works for Campaign Against Arms Trade, was on hand to show his support. He said: “We want to express our support for Ali’s demands and solidarity with the stands that he has taken. This hunger strike should never have had to happen. The Bahraini regime should never be treating prisoners the way that they have treated Ali’s father. The UK Government should not be arming and supporting such a brutal, oppressive regime which has carried out atrocities against its people for years and has treated Ali’s father, and many other prisoners, absolutely appallingly.”

In response to Mushaima’s hunger strike, Hassan Mushaima received a cancer scan and has been given access to vital medication that was previously unavailable to him, but several issues remain:

In January 2018, Hassan Mushaima was told by a doctor at the Bahrain Defence Force Hospital that he urgently needs to see a diabetes specialist. He has not been granted access to a consultation yet by the authorities.

In October 2017, Hassan Mushaima’s books, personal notes, and writing materials were confiscated for no reason. They may have been destroyed.

Hassan Mushaima continues to be denied his right to family visitation without being subjected to humiliating measures, including being shackled. He last saw his family 18 months ago, in February 2017. 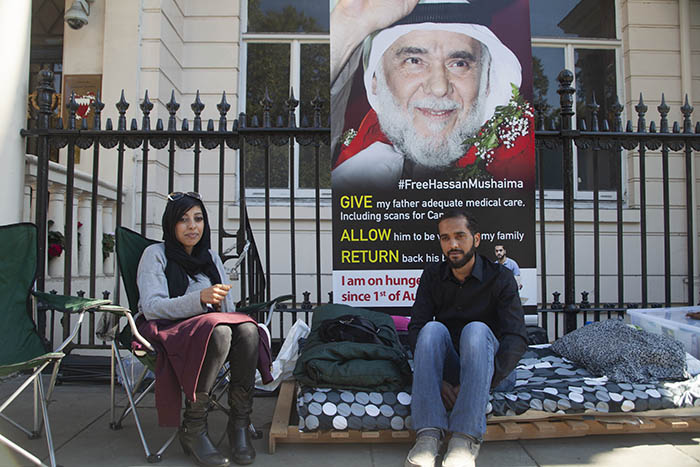