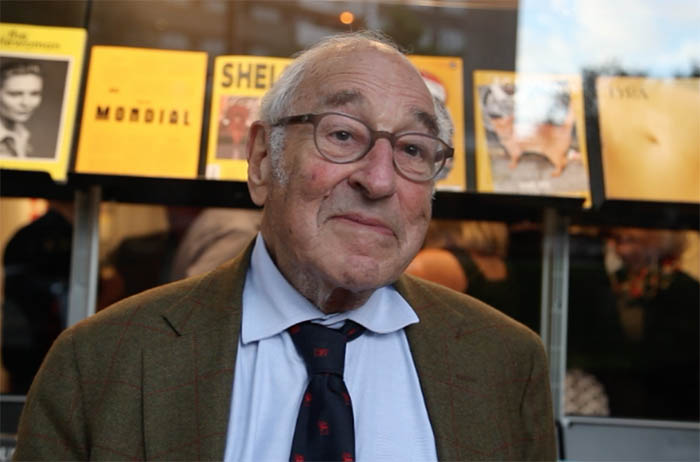 Louis Blom-Cooper at the launch of the 250th issue of Index on Censorship magazine at MagCulture, London, July 2016

Index on Censorship is deeply saddened by the news that Louis Blom-Cooper, one of the earliest supporters of our organisation, has passed away. The lawyer, human rights defender, free speech advocate and journalist died Wednesday at the age of 92.

Born in London in 1926, Blom-Cooper was called to the bar in 1952, where he championed and helped secure prisoners’ rights and campaigned against the death penalty. Doughty Street Chambers, the human rights firm that he later spent many years working at, said in a tribute to Blom-Cooper at his 90th birthday:

“It was he who first challenged the mandatory death penalty throughout the Commonwealth, raising arguments decades before they came to be accepted by the Privy Council.”

In 1961 he helped found Amnesty by supporting an appeal for amnesty for political prisoners and getting this appeal publicised in the Observer. Then, in the 1970s he became involved in the establishment of Index. For the 250 issue of Index on Censorship magazine, published in 2016, Blom-Cooper wrote about why he initially became involved with the organisation and why it is still needed today. He said:

“If one views the current scene of censorship, whether it be self-censorship or state intervention on individual speech, one is struck by its intrusion elsewhere – in universities and other paragons of human knowledge. There is much to be concerned about. The ambit of freedom of speech, which may be qualified by other public interests, needs close examination and protection from other interests that do not apply as qualifications of the proposed rights. It is a core function of Index to scrutinise the scope of Article 10 of the convention. At a time when the convention is under threat of extinction (as some ministers aver) or modification by a domestic bill of rights (as other ministers might claim) vigilance is called for. The road is clearly marked ahead, without any diversionary influence that smacks of authoritarianism.”

He also attended the London launch of the issue, where he gave an emotive speech about still being involved with Index decades later. Watch the clip here.

Unsurprisingly, Blom-Cooper was known fondly for his fierce intellect and love of debate and in this first article for Index on Censorship magazine, published in 1977, these qualities shine. Here he has a fruitful back-and-forth with the philosopher and critic Stuart Hampshire about the exact definition of the word “censorship”.

He was later interviewed for the Index website on the Leveson Inquiry.

Blom-Cooper was also independent commissioner for holding centres in Northern Ireland and wrote this article in the magazine in 1997.

Jodie Ginsberg, CEO of Index on Censorship, said: “I had the privilege to meet Louis Blom-Cooper when I first started at Index and was inspired by his still unstinting commitment to freedom of expression and the need to tackle censorship worldwide. We strive daily to defend the freedoms that he believed to be so important in creating a better society.”

Click here for more information on the founding of Index on Censorship.