Professors in Mersin and Eskişehir have responded to their dismissals by creating their own spaces for sharing knowledge: Kültürhane and Eskişehir School

Deniz Altınay doses and tamps coffee in a way that shows he has done it many times before. Just three years ago, his daily routine used to be much different.

Back then, he would often stand in front of a dozen students in a classroom at the University of Mersin and lecture about media and communications. But that was before he and about 20 other academics were dismissed from the university for signing a petition calling for peace in protest against Turkish military operations in Kurdish provinces at the beginning of 2016.

Soon, the coffee machine starts to buzz and gurgle. He turns to students waiting on the other side of the counter and smiles. Along with two other dismissed academics and a friend, Altınay is one of the founders of Kültürhane, which literally means “House of Culture,” in the coastal city of Mersin. Kültürhane houses a library of 5,000 mostly donated books, a working space, as well as a café that doubles as an event venue.

Since Altınay and his partners were banned from teaching, the group of academics created a space where students could regularly drop in, learn and cram for exams. After all, even if they can’t give their high-achieving students an “A” anymore, they can at least serve them coffee and tea for their hard work. It’s a hierarchy that has been turned, if not upside-down, from vertical to horizontal in a country in which the relationship between academics and students is traditionally strict, epitomised by the word hocam, a mark of respect meaning “my teacher” or “my professor” used by every student, even when addressing them informally.

“To be honest, it was harder for our students and our friends to get used to it than for us,” Altınay says, laughing heartily. “Some of my students would say ‘Hocam, please don’t take the trouble of bringing us anything,’ and I would need to tell them ‘on the contrary, you should ask me to bring it because treating my students and friends is a great pleasure for me.’”

Kültürhane has allowed them to realise many things they wouldn’t have perceived at the university, he says. “The things we could change at the university were limited. Transforming the relationship with our students was important for us. We are no longer the university’s employees, and Kültürhane has provided us a very different kind of freedom. We can finally define the limits ourselves.”

Much like Turkey’s universities at present, the country’s streets are most certainly not spaces where people can engage in free speech. As public spaces become increasingly oppressive, the small niches of freedom like Kültürhane become even more valuable. “Here, we are making each other feel better. It’s like therapy.”

And a much needed one. When a platform called Academics for Peace issued a statement on 10 January 2016 calling for the end to Turkish military operations in a number of urban areas in southeastern Turkey, such as Cizre, Silvan, Nusaybin or Diyarbakır’s historic neighbourhood of Sur, they received overwhelming support from their colleagues. Some 1,128 academics signed the statement, while another thousand added their name to the list after the document went public. “We, as academics and researchers working on and/or in Turkey, declare that we will not be a party to this massacre by remaining silent,” the statement read. “We demand an immediate end to the violence perpetrated by the state.”

Those were strong words tearing decades of silence and hypocrisy apart. Intellectuals had kept mum when it came to the dirty military war against the Kurds, but with the nationwide Gezi protests still fresh in the memory, people were finally daring to speak up. The retribution, however, was harsh. Hundreds of academics who didn’t withdraw their signatures were first suspended and then dismissed by decree after the government acquired exceptional powers under the state of emergency that was declared in the wake of a coup attempt on 15 July 2016. Investigations were opened individually against each signatory on charges of “conducting propaganda for a terrorist organisation.”

Thirty-eight signatories of the Academics for Peace petition have been sentenced to 15 months each in prison so far, while two others have been sentenced to 18 months in jail. Some academics, such as political science professors Füsun Üstel and Büşra Ersanlı, rejected the possibility of a suspension of their sentence, meaning that they will spend time in prison when their verdict is upheld on appeal. More than 300 cases are continuing while prosecutors have also launched new trials, including cases against academics in Mersin and Adana. On the flip side, pro-government mafia boss Sedat Peker was recently acquitted in a case that was launched against him for threatening the petition’s signatories, saying he would “take a shower in [their] blood” — a ruling that clearly highlighted the concept of crime according to the Turkish judiciary doesn’t quite correspond to international human rights standards or pretty much to any conventional wisdom.

Altınay says their ordeal is not just legal but also economic. Many academics had to leave the country to continue their career in universities in Europe or the United States. Others who stayed, either by choice or because they were slapped with a travel ban, struggle to find work and make ends meet.

But the ordeal is ultimately psychological. One of the signatories of the petition, Mehmet Fatih Traş, committed suicide months after being dismissed from the University of Çukurova, in the nearby city of Adana. A letter to a colleague revealed that Traş had experienced significant mobbing from other academics who accused him of being a “PKK sympathiser,” in reference to the outlawed Kurdistan Workers’ Party. As a result, the rector’s office cancelled three of Traş’s courses. In tribute and a reminder of the hardships some academics went through, Kültürhane’s library now bears his name.

“What we do shouldn’t be over-romanticised either,” Altınay says. “We are open seven days of the week, we work up to 10-12 hours a day. It’s physical work that also wears you out mentally, and we need to make a living out of it.”

Without a doubt, solidarity among academics has been one of the key elements that has kept them going. One of the first initiatives was founded in the city of Eskişehir in western Turkey a few months after the petition circulated. A group of academics who were suspended from their positions began organising “solidarity classes” off campus. More than 50 classes have been held since under the label of “Eskişehir School.” The initiative’s founders have now opened their own space – a café with a screening room and a workshop studio – called Uçurtma (Kite). Eskişehir, perhaps the only locality in Turkey that resembles a student city thanks to the quality of its university programs, was an ideal place for the burgeoning solidarity to bear fruit.

“We were one of the first groups which became the object of an investigation. We organised the first solidarity class in May 2016. We hadn’t been dismissed yet at the time,” said Pelin Yalçınoğlu, a former lecturer at the faculty of education of Anadolu University. “We wanted to draw attention to what universities were and show that it was not possible to lock knowledge inside a campus. If they were not going to give us space for questioning, we thought we might do it elsewhere.”

Since May 2016, people have gathered every two weeks to learn and discuss a different subject. The day of our interview, Eskişehir School was holding a class on theatre with Tülin Sağlam, a prominent expert on the art of theatre in the country. Just like the organisers, Sağlam was dismissed from her position at the prestigious language, history and geography department of the University of Ankara for signing the petition.

“There were animated debates among us when we decided to choose the name Eskişehir School for our initiative. While we were wondering how we could fulfill [the underlying ambitions], everybody loved the name.” But as time passed, the initiative needed a space to take root. Economic needs were pressing too. If the meagre financial support collected for the school was used in helping out an academic who was dismissed with one of the first emergency decrees, it wasn’t enough for the founders who soon met the same fate. And so was born Uçurtma.

“This is a space to allow Eskişehir School to continue existing,” Yalçınoğlu said. While some of her colleagues started making a transition and others kept working in jobs related to their own field, Yalçınoğlu wanted to invest herself in an activity that could feed Eskişehir School. “What we all want is actually to make Eskişehir School worthy of its name. If you call it ‘school,’ it should have a say and a perspective on the production of knowledge in this country. We would like it to do its own research, publish its own articles, organise seminars and conferences; [we just want it] to go beyond the classes.” Their new endeavour started with a two-day symposium on law and dystopia in November.

Both Kültürhane and Eskişehir School show that some of the dismissed academics are choosing the road less travelled and keeping up the fight by creating their own spaces for knowledge, even if it means an uncertain future for their careers. In both efforts, the common concern is that the government is now dictating what should be taught at Turkish universities, and what should not.

“There is an intense propaganda activity going on,” Altınay said. “Dismissals are part of this propaganda and also a very serious censorship mechanism. By doing so, they are erecting a very clear obstacle for the expression of certain thoughts. These are not ideological thoughts at all, but scientific truths. And they are raising a generation who won’t know anything about these scientific truths. I don’t know a bigger censorship than that.”

Kültürhane, which turned one this year, became such a breathing space for many people that the founders even became an object of mirth. “They are teasing us, ‘how fortunate that you were dismissed,’” Altınay said. In a year, they have organised around 150 events, discussions or workshops on all types of subjects and topics.

Kültürhane’s co-founder, Ulaş Bayraktar, also feels inspired by the public’s response. “We didn’t plan anything or even know what we were doing. We just had a feeling. I personally never attached a lot of meaning to being an academic or a public servant. Our means have changed, but it’s the same journey. The difference is that we don’t have an official title anymore.” For the future, he hopes to see all the initiatives cooperating together. “If we can develop such a model, I think these initiatives can leave a mark. But I am hopeful. All these efforts give us the hint of the power of being together.”

Yalçınoğlu, Altınay and Bayraktar don’t expect the current situation for dismissed academics to change in the near future. In the face of ever-worsening political pressure and a severe economic crisis, they are determined to conserve their small-scale haven of knowledge. These initiatives should perhaps also be considered as their modest response to their dismissals. 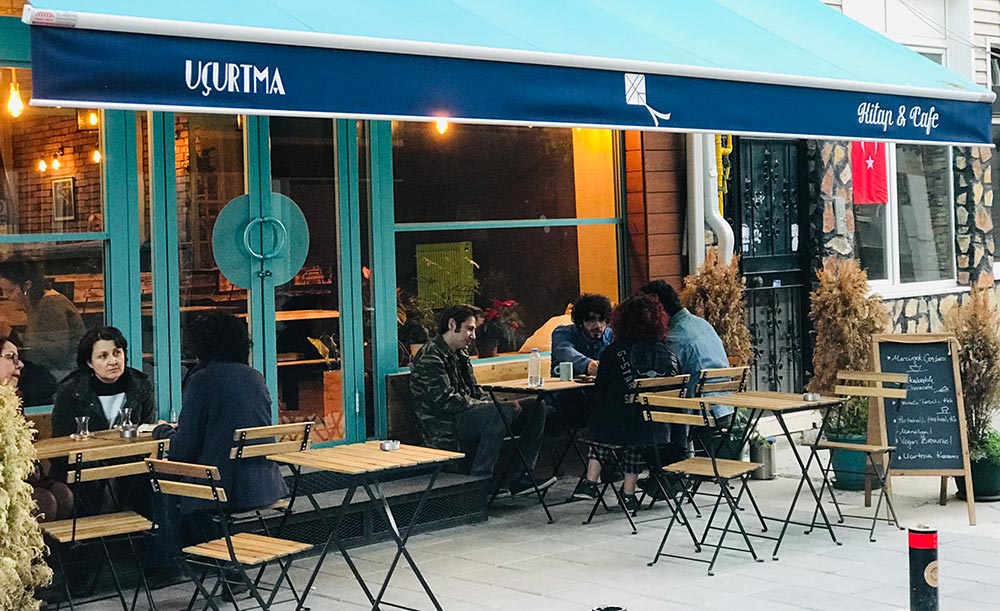 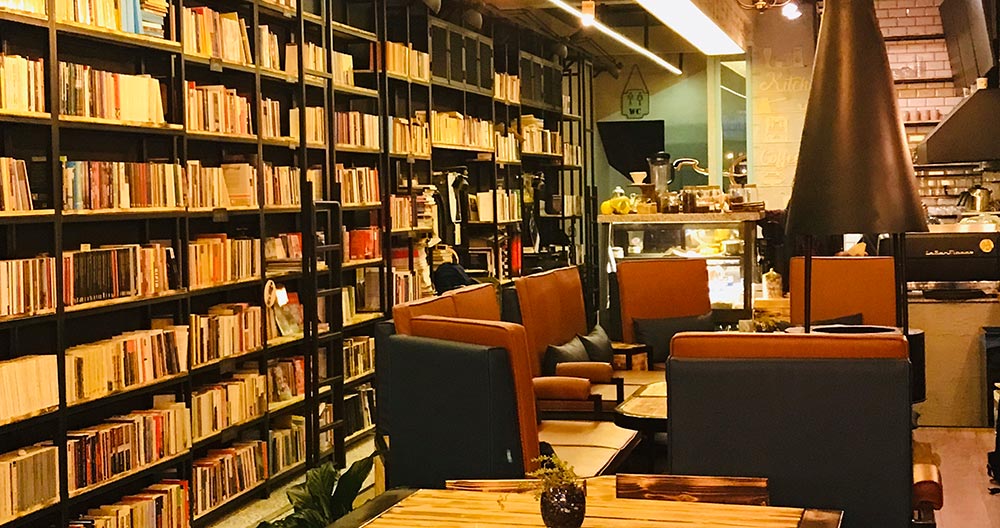 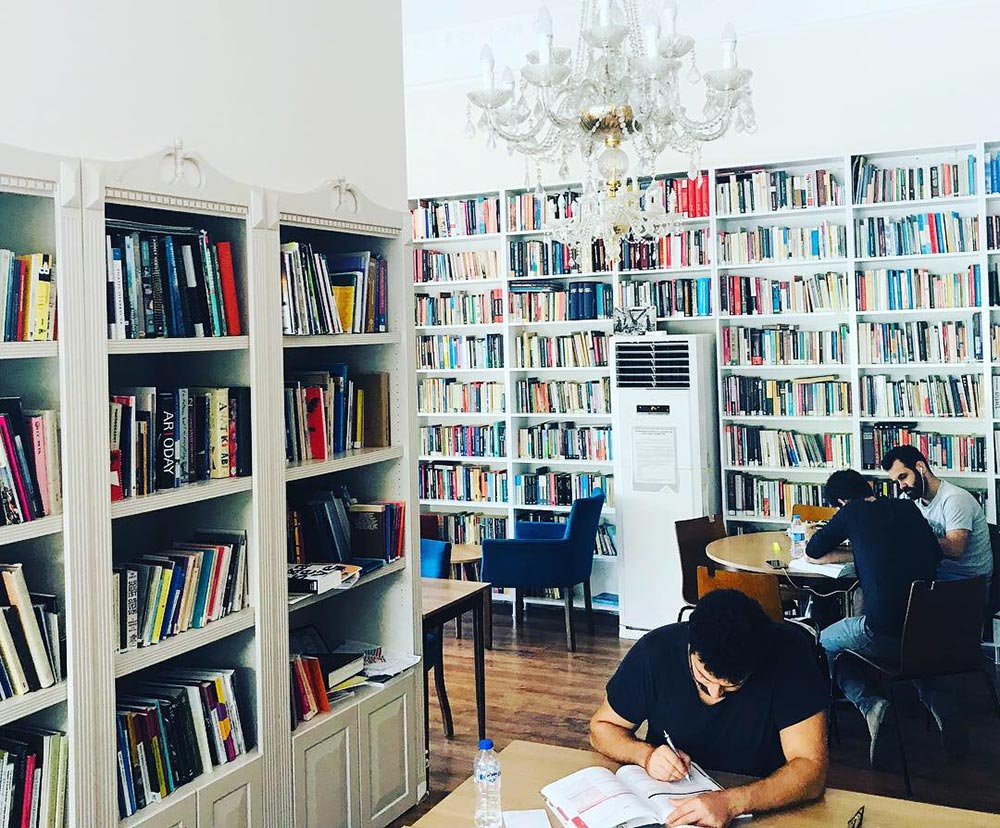 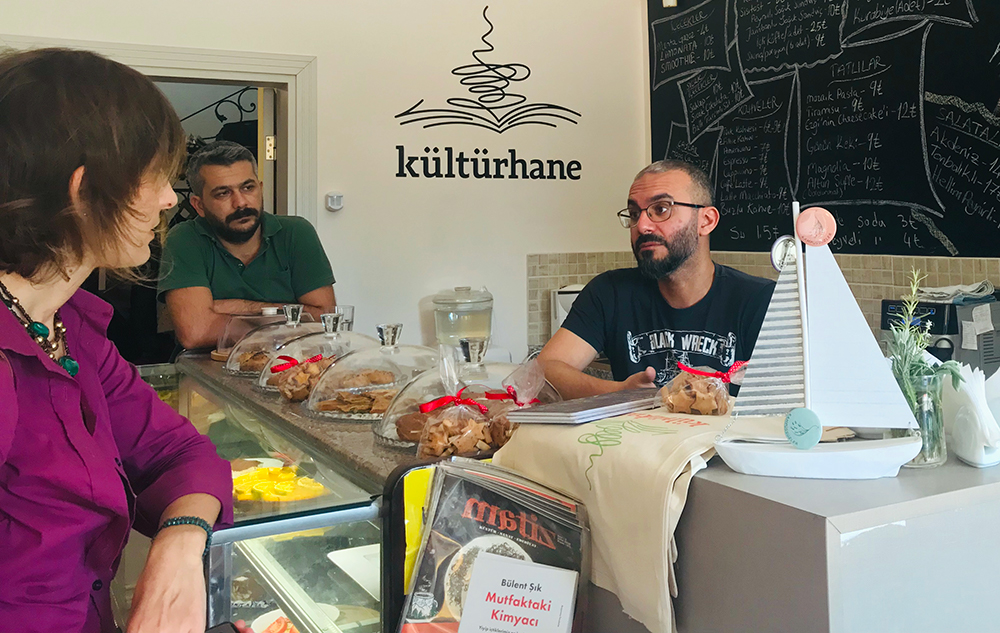 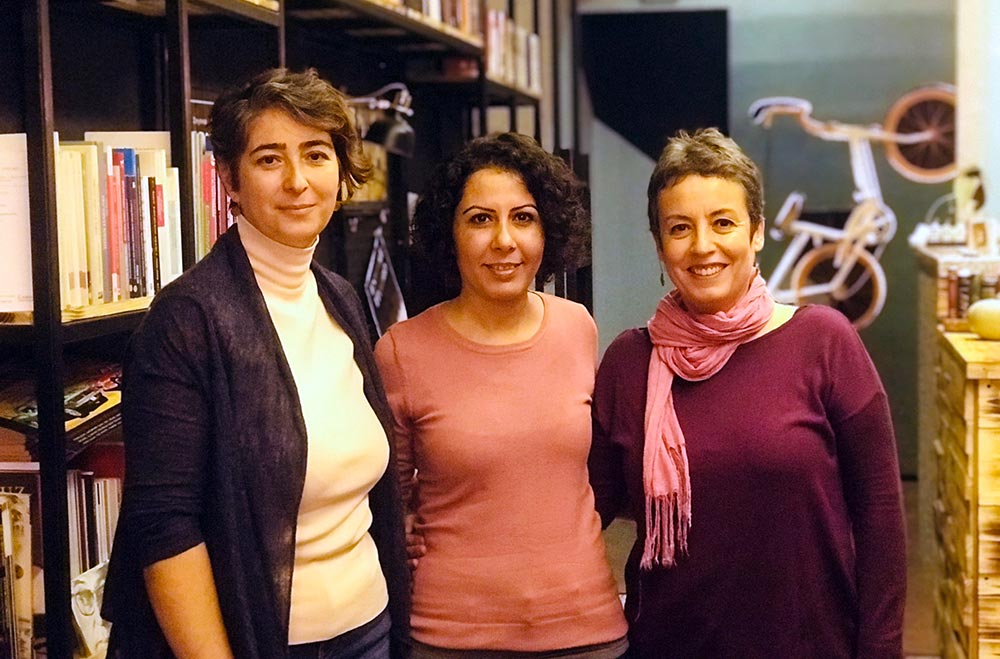 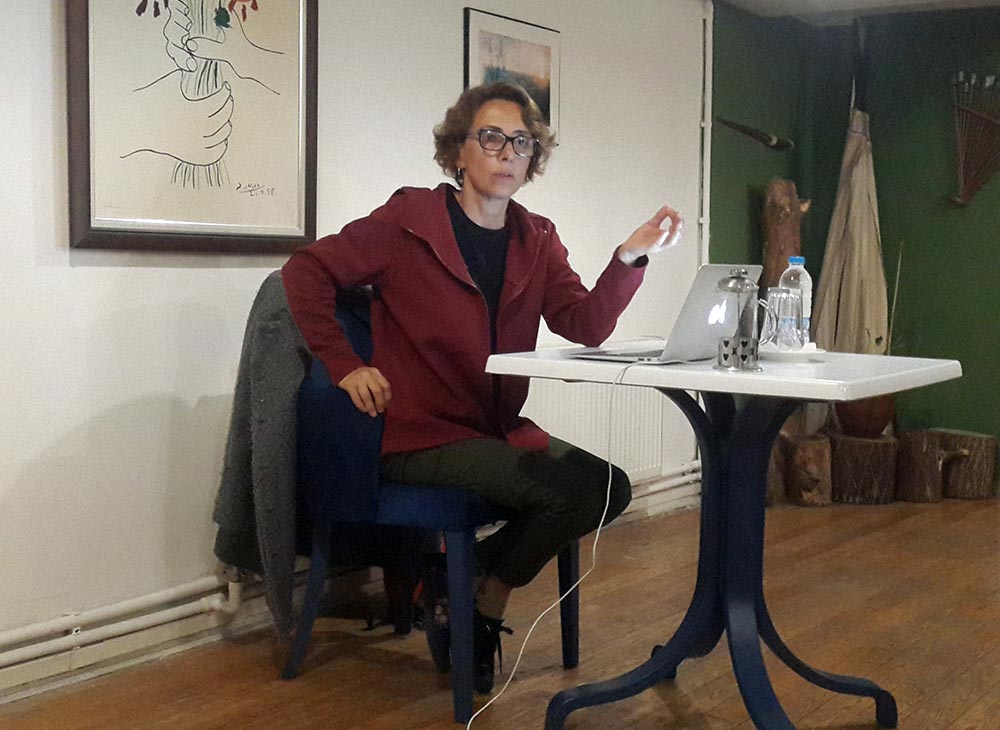 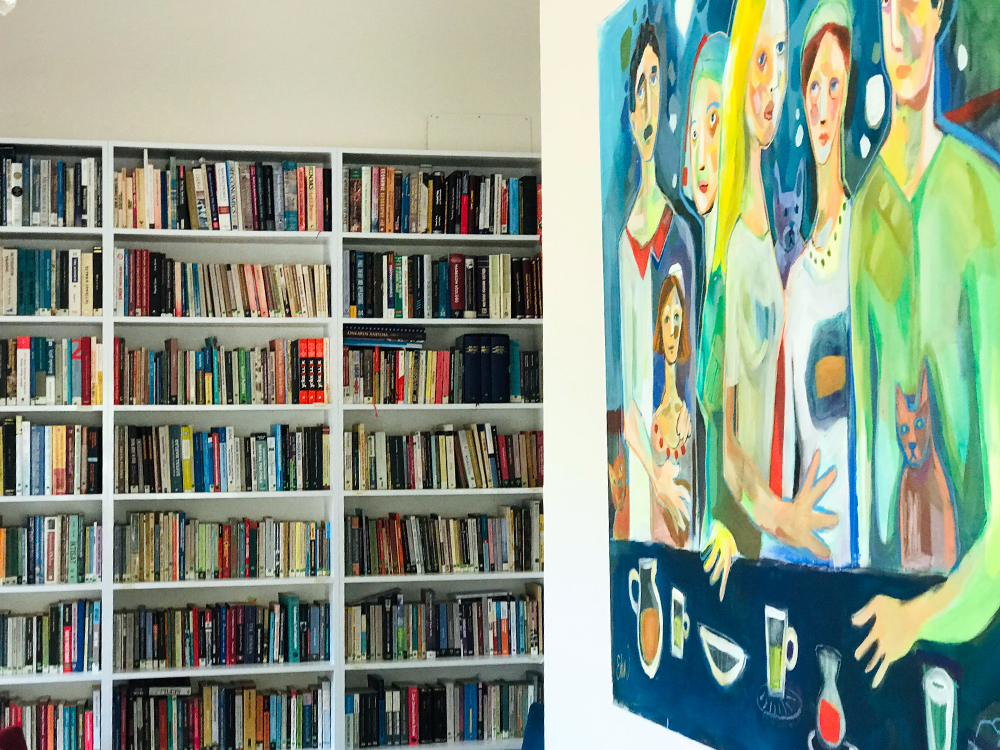