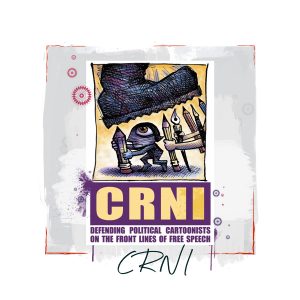 Cartoonists Rights Network International (CRNI) is a small organisation with a big impact: monitoring threats and abuses against editorial cartoonists worldwide. It is a lifeline for cartoonists in danger across the world. Despite the organisation’s limited size, resources and capacity, it is able to marshall an impressive network to focus international attention on cases in which cartoonists are persecuted and put pressure on the persecutors.

The network was instrumental in the release of graphic novelist Ramón Nsé Esono Ebalé who was imprisoned in Equatorial Guinea on bogus counterfeiting charges because of his criticism of the country’s president and government.

CRNI tracks censorship, fines, penalties and physical intimidation (including of family members), assault, imprisonment, and even assassinations. Once a threat is detected, CRNI often partners with other human rights organisations to maximise the pressure and impact of a campaign to protect the cartoonist and confront those who seek to censor political cartoonists.

Cartoonists are frequently targeted by authoritarian governments and lack the protection offered by unions or large media organisations, therefore external support is crucial.

CRNI participated in the campaign to assist Malaysian cartoonist Zunar, accused of sedition on nine counts and subjected to a travel ban. The charges were dropped in July 2018. They helped Nikahang Kowsar leave Iran after a prison sentence and resettle his family in North America.

Others supported include American cartoonist Jake Thrasher, for whom they raised awareness of his work when he was received death threats and homophobic abuse. It helped Tony Namate, Zimbabwe, who then faced personal threats by pro-Mugabe thugs and loss of income after his employer was forced into closure by government court action.

Another way CRNI helps cartoonists’ free expression is through its yearly Courage in Editorial Cartooning Award. Receiving the award brings international attention to a cartoonist’s work, grows his or her readership, and thus reduces the amount of pressure he or she is subject to.

CRNI has also helped fund the 2017 gathering of cartoonists in Cape Town, South Africa, facilitated by Africartoons, where personal safety and survival strategy in response to hostile working environments were discussed.

In 2018, CRNI was instrumental in the release of graphic novelist Ramón Nsé Esono Ebalé. CRNI also campaigned for the the release of Ali Dorani, aka Eaten Fish, from the “regional processing centre” on Manus Island, Papua New Guinea, and raised his case with ICORN who were in turn able to facilitate refuge for him in Norway.