MAGAZINE
Majority of editors worry that local newspapers do not have the resources to hold the powerful to account in the way they did in the past, says new report
29 Mar 2019
BY RACHAEL JOLLEY 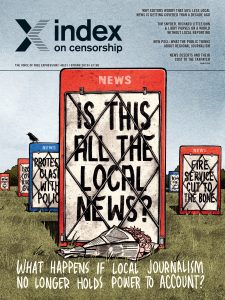 Ninety seven per cent of senior journalists and editors working for the UK’s regional newspapers and news sites say they worry that that local newspapers do not have the resources to hold power to account in the way that they did in the past, according to a survey carried out by the Society of Editors and Index on Censorship. And 70% of those respondents surveyed for a special report published in Index on Censorship magazine are worried a lot about this.

The survey found that 50% of editors and journalists are most worried that no one will be doing the difficult stories in future, and 43% that the public’s right to know will disappear. A small number worry most that there will be too much emphasis on light, funny stories.

There are some specific issues that editors worry about, such as covering court cases and council meetings with limited resources.

Twenty editors surveyed say that they feel only half as much local news is getting covered in their area compared with a decade ago, with 15 respondents saying that about 10% less news is getting covered. And 74% say their news outlet covers court cases once a week, and 18% say they hardly ever cover courts.

The special report also includes a YouGov poll commissioned for Index on public attitudes to local journalism. Forty per cent of British adults over the age of 65 think that the public know less about what is happening in areas where local newspapers have closed, according to the poll.

Meanwhile, 26% of over-65s say that local politicians have too much power where local newspapers have closed, compared with only 16% of 18 to 24-year-olds. This is according to YouGov data drawn from a representative sample of 1,840 British adults polled on 21-22 February 2019.

The demise of local reporting undermines all journalism, creating black holes at the moment when understanding the “backcountry” is crucial

The Index magazine special report charts the reduction in local news reporting around the world, looking at China, Argentina, Spain, the USA, the UK among other countries.

Index on Censorship editor Rachael Jolley said: “Big ideas are needed. Democracy loses if local news disappears. Sadly, those long-held checks and balances are fracturing, and there are few replacements on the horizon. Proper journalism cannot be replaced by people tweeting their opinions and the occasional photo of a squirrel, no matter how amusing the squirrel might be.”

She added: “If no local reporters are left living and working in these communities, are they really going to care about those places? News will go unreported; stories will not be told; people will not know what has happened in their towns and communities.”

Others interviewed for the magazine on local news included:

Michael Sassi, editor of the Nottingham Post and the Nottingham Live website, who said: “There’s no doubt that local decision-makers aren’t subject to the level of scrutiny they once were.”

Lord Judge, former lord chief justice for England and Wales, said: “As the number of newspapers declines and fewer journalists attend court, particularly in courts outside London and the major cities, and except in high profile cases, the  necessary public scrutiny of the judicial process will be steadily eroded,eventually to virtual extinction.”

US historian and author Tim Snyder said: “The policy thing is that government – whether it is the EU or the United States or individual states – has to create the conditions where local media can flourish.”

“A less informed society where news is replaced by public relations, reactive commentary and agenda management by corporations and governments will become dangerously volatile and open to manipulation by special interests. Allan Prosser, editor of the Irish Examiner.

“The demise of local reporting undermines all journalism, creating black holes at the moment when understanding the “backcountry” is crucial. Belgian journalist Jean Paul Marthoz.

The special report “Is this all the local news? What happens if local journalism no longer holds power to account?” is part of the spring issue of Index on Censorship magazine.

Note to editors: Index on Censorship is a quarterly magazine, which was first published in 1972. It has correspondents all over the world and covers freedom of expression issues and censored writing

Index on Censorship’s spring 2019 issue asks Is this all the local news? What happens if local journalism no longer holds power to account?  We explore the repercussions in the issue.

Look out for the new edition in bookshops, and don’t miss our Index on Censorship podcast, with special guests, on iTunes and Soundcloud.

Is this all the Local News?

The spring 2019 issue of Index on Censorship magazine explores what happens to democracy without local journalism, and how it can survive in the future.