Criminal charges, physical attacks and internet restrictions were among the main tools used to stifle dissent in Turkey last year, according to new analysis from Index on Censorship’s Monitoring and Advocating for Media Freedom project

2019 was not a good year, once again, for journalists in Turkey, as President Recep Tayyip Erdogan continued his media crackdown. Wide-ranging and ill-defined laws were used to target independent journalists. They faced criminal charges, arbitrary detentions, physical attacks, prison sentences and internet restrictions. More than 120 journalists remained in prison in Turkey during 2019. 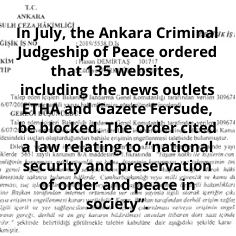 Journalists who reported on Kurdish issues or worked with pro-Kurdish media outlets were more likely to be targeted by the authorities and were inordinately more likely to be charged with terrorism-related offences. And following Turkey’s military operation in Syria in October, on 10 October the public prosecutor prohibited any criticism of “Operation Peace Spring”, leading to an intensification of the crackdown on journalists.

Ahead of the UN’s Universal Periodic Review of Turkey at the end of this January (a process in which the human rights records of the UN member states is reviewed), we publish the three most frequently used means of targeting journalists in Turkey in 2019, as recorded by our Monitoring and Advocating for Media Freedom project:

Journalists were repeatedly charged with “insulting a public official” or “insulting the president” under Articles 125 and 299 respectively of the Turkish penal code.

On 19 May,  for example, local journalist Mustafa Yayla was sent to prison in Izmir to serve a sentence of 11 months and 20 days, after an appellate court upheld his conviction of insulting Erdogan in his social media posts.

Prosecutions under Article 299 have risen sharply in recent years: since Erdogan came to power in 2014, they have increased from 132 to more than 6,000 in 2017. Data is not yet available for 2019 but according to Birgun newspaper, 5,223 people – including 128 children – stood trial on the charge of insulting the president in 2018, with journalists often being singled out and the charge being especially damaging.

Physical attacks on journalists took place throughout 2019, but as outlined in Index’s July report, there was an unprecedented rise in May when eight incidents were recorded. Some of these were incredibly serious, such as on 10 May, when Yeniçağ columnist Yavuz Selim Demirağ sustained serious injuries in an assault hear his home in Ankara. Although police detained six suspects, all were released, reportedly on the grounds that “the state of health of the victim was not life-threatening”.

The violence was largely attributed to political divisions, specifically between nationalists and conservatives, which were heightened in the wake of the annulment of the Istanbul mayoral elections and ahead of the second round, which took place in late June.

Following his visit to Turkey in 2016, the United Nations Special Rapporteur on the promotion and protection of the right to freedom of expression, called on the Turkish government to “refrain from excessive blocking and filtering of content and limit its requests for takedowns to actual cases of incitement.” Nonetheless, the government continued to obstruct freedom of expression online. Despite the Constitutional Court ordering the repeal of the ban on Wikipedia (which has been in place for nearly three years), the ban remains in place.

In July, the Ankara Criminal Judgeship of Peace ordered that 136 websites, including the news outlets ETHA and Gazete Fersude, be blocked. The order cited a law relating to “national security and preservation of order and peace in society”.

Then on 1 August, a regulation mandating online content providers, including all online news outlets, to obtain a broadcasting license from the radio and television watchdog RTUK, was published. If content providers do not comply with the RTUK’s guidelines they are given 30 days to adjust their content or face having their licenses suspended for three months and later cancelled.