MAGAZINE
In the name of liberty...

In the winter 2019 issue of Index on Censorship magazine, editor-in-chief Rachael Jolley argues that a new generation of democratic leaders is actively eroding essential freedoms, including free speech 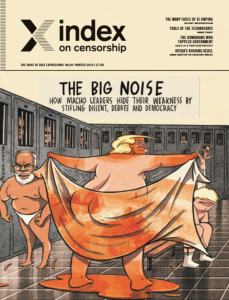 Like brothers in arms, they revel in the same set of characteristics. They share them, and their favourite ways of using them, on social media.

From Orbán to Trump and from Bolsonaro to Johnson, national leaders who want to dismiss analysis with a personalised tweet, and never want to answer a direct question, have come to power – and are using power to silence us. They like to think of themselves as strongmen but what, in fact, they are doing is channelling the worst kind of machismo.

For toughness, read intolerance of disagreement. They are extremely uncomfortable with public criticism. They would rather hold a Facebook “press conference” where they are not pressed than one where reporters get to push them on details they would rather not address. Despite running countries, they try to pretend that those who hold them to account are the elite who the public should not trust.

While every generation has its “tough” leaders, what’s different about today’s is that they are everywhere, and learning, copying and sharing their measures with each other – aided, of course, by the internet, which is their ultimate best friend. And this is not just a phenomenon we are seeing on one continent. Right now these techniques are coming at us from all around the globe, as if one giant algorithm is showing them the way. And it’s not happening just in countries run by unelected dictators; democratically elected leaders are very firmly part of this boys’ club.

Here are some favoured techniques:

If you don’t like some media coverage, you look at ways of closing down or silencing that media outlet, and possibly others. Could a friend buy it? Could you bring in some legislation that shuts it out? How about making sure it loses its advertising? That is happening now. In Hungary, there are very few independent media outlets left, and the media that remain is pretty scared about what might happen to them. Hungarian journalists are moving to other countries to get the chance to write about the issues.

In China, President Xi Jinping has just increased the pressure on journalists who report for official outlets by insisting they take a knowledge test, which is very much like a loyalty test, before being given press cards.

Just today, as I sit here writing, I’ve switched on the radio to hear that the UK’s Conservative Party has made an official complaint to the TV watchdog over Channel 4’s coverage of the general election campaign (there was a debate last night on climate change where party leaders who didn’t turn up were replaced with giant blocks of ice). A party source told the Conservative-supporting Daily Telegraph newspaper: “If we are re-elected, we will have to review Channel 4’s public service broadcasting obligations. Any review would, of course, look at whether its remit should be better focused so it is serving the public in the best way possible.” In summary, they are saying they will close down the media that disagree with them.

This not very veiled threat is very much in line with the rhetoric from President Donald Trump in the USA and President Viktor Orbán in Hungary about the media knowing its place as more a subservient hat-tipping servant than a watchdog holding power to account. It’s also not so far from attitudes that are prevalent in Russia and China about the role of the media.
For those who might think that media freedom is a luxury, or doesn’t have much importance in their lives, I suggest they take a quick look at any country or point in history where media freedom was taken away, and then ask themselves: “Do I want to live there?”

Dictators know that control of the message underpins their power, and so does this generation of macho leaders. Getting the media “under control” is a high priority. Trump went on the offensive against journalists from the first minute he strode out on to the public stage. Brazil’s newish leader, President Jair Bolsonaro, knows it too. In fact, he got together with Trump on the steps of the White House to agree on a fightback against “fake news”, and we all should know what they mean right there. “Fake news” is news they don’t like and really would rather not hear.

When the founders of the USA sat down to write the Constitution – that essential document of freedom, written because many of them had fled from countries where they were not allowed to speak, take certain jobs or practise their religion – they had in mind creating a country where freedom was protected. The First Amendment encapsulates the right to criticise the powerful, but now the country is led by someone who says, basically, he doesn’t support it. No wonder McCraw feels a deep sense of unease.

But when Trump’s team started to try to control media coverage, by not inviting the most critical media to press briefings, what was impressive was that American journalists from across the political spectrum spoke out for media freedom. When then White House press secretary Sean Spicer tried to stop journalists from The New York Times, The Guardian and CNN from attending some briefings, Bret Baier, a senior anchor with Fox News, spoke out. He said on Twitter: “Some at CNN & NYT stood w/FOX News when the Obama admin attacked us & tried 2 exclude us-a WH gaggle should be open to all credentialed orgs.”

The media stood up and criticised the attempt to allow only favoured outlets access, with many (including The Wall Street Journal, AP and Bloomberg) calling it out. What was impressive was that they were standing up for the principle of media freedom. The White House is likely to at least think carefully about similar moves when it realises it risks alienating its friendly media as well as its critics.

And that's the lesson for media everywhere. Don't let them divide and rule you

And that’s the lesson for media everywhere. Don’t let them divide and rule you. If a newspaper that you think of as the opposition is not allowed access to a press briefing because the prime minister or the president doesn’t like it, you should be shouting about it just as hard as if it happened to you, because it is about the principle. If you don’t believe in the principle, in time they will come for you and no one will be there to speak out.

That’s the big point being made by Baier: it happened to us and people spoke up for us, so now I am doing the same. A seasoned Turkish journalist told me that one of the reasons the Turkish government led by President Recep Tayyip Erdogan was able to get away with restrictions on critical media early on, was because the liberal media hadn’t stood up for the principle in earlier years when conservative press outlets were being excluded or criticised.

Sadly, the UK media did not show many signs of standing united when, during this year’s general election campaign, the Daily Mirror, a Labour-supporting newspaper, was kicked off the Conservative Party’s campaign “battle bus”. The bus carries journalists and Prime Minister Boris Johnson around the country during the campaign. The Mirror, which has about 11 million readers, was the only newspaper not allowed to board the bus. When the Mirror’s political editor called on other media to boycott the bus, the reaction was muted. Conservative Party tacticians will have seen this as a success, given the lack of solidarity to this move by the rest of the media (unlike the US coverage of the White House incident).

The lesson here is to stand up for the principles of freedom and democracy all the time, not just when they affect you. If you don’t, they will be gone before you know it.

Rallying rhetoric is another tried and tested tactic. They use it to divide the public into “them and us”, and try to convert others to thinking they are “people like us”. If we, the public, think they are on our side, we are more likely to put the X in their ballot box. Trump and Orbán practise the “people like us” and “everyone else is our enemy” strategies with abandon. They rail against people they don’t like using words such as “traitor”.

Again in Hungary, people are put into the “outsiders” box if they are gay, women who haven’t had children or don’t conform to the ideas that the Orbán government stands for.

Dividing people into “them and us” has huge implications for our democracies. In separating people, we start to lose our empathy for people who are “other” and we potentially stop standing up for them when something happens. It creates divides that are useful for those in power to manipulate to their advantage.

The University of Birmingham’s Henriette van der Bloom recently co-published research pamphlet Crisis of Rhetoric: Renewing Political Speech and Speechwriting. She said: “I think there is a risk we are all putting ourselves and others into boxes, then we cannot really collaborate about improving our society. Some would say that is what is partly going on at the moment.” Looking forward, she saw one impact could be “a society in crisis, speeches are delivered, and people listen, but it becomes more and more polarising”.

But it’s not just the future, it’s today. We already see societies in crisis, with democratic values being threatened and eroded. This does not point to a rosy future. But there are some signs for optimism. In this issue, we also feature protesters who have campaigned and achieved significant change. In Romania, a mass weekly protest against a new law which would allow political corruption has ended with the government standing down; in Hungary, a new opposition mayor has been elected in Budapest.

Democracies need to remember that criticism and political opposition are an essential part of their success. We must hope they do.

Index on Censorship’s winter 2019 issue is entitled The Big Noise: How macho leaders hide their weakness by stifling dissent, debate and democracy

How macho leaders hide their weakness by stifling dissent, debate and democracy