A reading list of articles from the Index archives covering press freedom, shows of patriotism and online trolling

In August 2019 the Indian government under Narendra Modi, leader of the the Hindu nationalist Bharatiya Janata Party, revoked Article 370 of the Indian constitution. The article had granted the state of Jammu and Kashmir the autonomy to write their own constitution and make their own laws. Since the article was revoked, residents of Jammu and Kashmir have been subjected to the world’s longest internet shutdown, a serious breach of their right to free expression and to access information. As the ban on high-speed internet continues, Index looks back on the history of freedom of expression in India, from the years following The Emergency, to the present.

Libya: Criticise & be killed, the December 1980 issue of Index on Censorship magazine

In 1975 Prime Minister Indira Gandhi was convicted of election malpractice conducted during her 1971 campaign. Despite this, she clung onto power and declared a state of emergency which lasted for 19 months, known as The Emergency. During this time, members of the political opposition were imprisoned and the press heavily censored. In this article written in 1980, the year Gandhi was re-elected, Michael Henderson questions if Indian journalists have a long enough memory and a robust enough spirit to stand up to a prime minister with a clear and recent track record of control of the press.

Black voices in South Africa, the December 1984 issue of Index on Censorship magazine

In 1984, George Theiner writes of an India still scarred by The Emergency and a visit to Index on Censorship by Mr Justice A N Grover, chairman of the Press Council of India, who took issue with the magazine’s continuing criticism of the Indian press. Theiner interviewed journalists about the future of democracy and a free press under Indira Gandhi. He found a mixture of those who were still in shock about the censorship during The Emergency, and those who were complacent in a belief that it couldn’t happen again. (The future of India under Gandhi came to be something of a moot point as, in October 1984, a few months after this article was published, she was assassinated by her own bodyguards.) 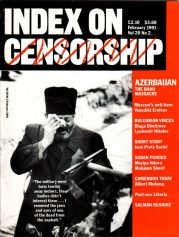 Azerbaijan: the Baku Massacre, the February 1991 issue of Index on Censorship magazine

In 1991 India had a free press… in newspapers. Television and radio were state-owned and state-exploited. Other innovative types of media became a political battleground, with opposition parties promising to release the government’s grip on a news outlet that was fast evolving. Sidharth Bhatia’s piece details the independent video magazines set up by journalists which had to be rented from a video shop. When these magazines became successful, reaching a wide audience and providing information not stifled by a state agenda, government censorship began to encroach upon them. 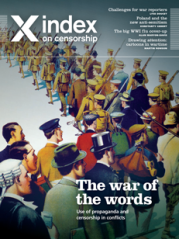 The war of the words, the March 2014 issue of Index on Censorship magazine

Prayaag Akbar examines the role the rich and powerful have in press censorship in India, but in this case it is wealthy business owners, rather than the government, who come under scrutiny. Media outlets who find themselves owned by a large business conglomerate, may then be under pressure to self-censor in order to avoid reporting negatively on the hand that feeds them. Akbar cites examples of the collision of business interests with journalistic integrity as the richest men in India buy up large portions of the national media groups. 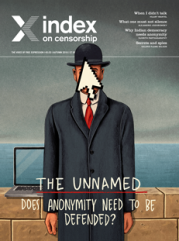 The unnamed, the September 2016 issue of Index on Censorship magazine

Is online anonymity allowing trolls to abuse women without consequences, or it is vital for the safety of those whose expression does not follow the party line? In 2016, as Twitter became more widely used in India, and issues of trolling became apparent, government ministers suggested removing the anonymity of trolls in a bid to increase accountability. Suhrith Parthasarathy reports on how state involvement with online expression could lead to the anonymity of activists being revoked to protect state interests. 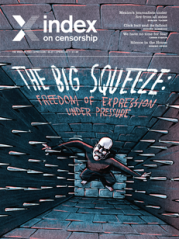 The Big Squeeze, the April 2017 issue of Index on Censorship magazine

In November 2016, a Supreme Court order made it obligatory to stand during the national anthem, which is played in Indian cinemas before the film begins, equating being patriotic with being a law-abiding citizen. Lawyer and writer Suhrith Parthasarathy examines the legal complexities of enforcing shows of patriotism in a country whose constitution guarantees freedom of expression, and speaks to people who have been subject to police interviews for choosing to stay seated. 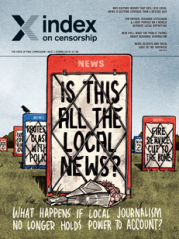 Is This All the Local News?, the April 2019 issue of Index on Censorship magazine

Rituparna Chatterjee reports on the importance of local news, and threats faced by local news journalists in India. Journalists working in rural parts of India can face pay too low to survive on, and can be susceptible to bribes from local police officers and politicians, keen to censor scandals. Chatterjee also highlights how tribal and indigenous communities can end up excluded from the national narrative of India when large media conglomerates do not report on issues in the areas they live in. 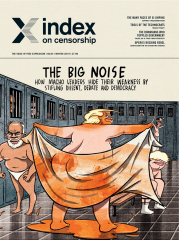 The Big Noise, the December 2019 issue of Index on Censorship magazine

The Emergency of 1975-1977 has been seen in later years as a blip in freedom of expression in India. However, since the election of Modi to prime minister in 2014, freedom of expression in India is taking a hit. Modi’s supporters are instilling fear and committing violence against those considered outsiders, often Muslims. Such violence is not being roundly condemned by their leader; his silence is taken as tacit approval. Meanwhile the internet shutdown imposed on Kashmir has not been fully lifted, an attack on access to information.

One response to “Freedom of expression in India from The Emergency to the present, a reading list”