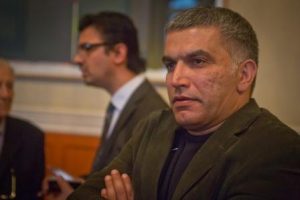 Nabeel Rajab at the 2012 Freedom of Expression Awards

Index welcomes the news that Bahraini human rights activist Nabeel Rajab has been freed from prison. Rajab, the president of the Bahrain Center for Human Rights and an Index on Censorship Freedom of Expression Award winner in 2012, had been held since 2016 and convicted of offences including “spreading fake news”.

Rajab had tweeted about torture in Bahrain’s jails and had criticised the war in Yemen. As Index wrote during one of his many appeals: “Those are not crimes. Opinions are not crimes.”

Rajab has suffered relentless harassment since his involvement as a peaceful activist during the Bahrain uprising in 2011, during which he was in and out of prison on numerous occasions. He was then in prison on a continual basis from June 2016, and was sentenced in all to seven years in prison across two separate trials. In February 2018 he was sentenced to five years in prison for tweeting, which was added to a two-year conviction in June 2017 for “broadcasting fake news” relating to television interviews he gave in 2015.

On Tuesday, Rajab’s lawyer said he would serve the remainder of his sentence in a non-custodial setting.

“This is amazing news. Index on Censorship has been pushing for this for a long time,” said Rachael Jolley, editor-in-chief at Index.

But while we welcome news of his release and reunion with his family, we still demand that all charges are dropped against Rajab, as well as all others who are imprisoned in Bahrain simply for their views and advocacy.

This year, one of the co-winners of the Index on Censorship Freedom of Expression Awards Campaigning category was Sayed Ahmed Alwadaei, a Bahraini activist currently living in exile in the UK who is the director of advocacy at the Bahrain Institute for Rights and Democracy. As Alwadaei said when accepting the award in April:

“The price for expressing yourself in Bahrain remains very high. I myself ended up in prison for speaking to the press during the Arab Spring.”