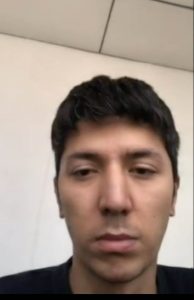 In a video clip that went viral yesterday, Uighur model Merdan Ghappar doesn’t speak. But he doesn’t need to – the footage says enough. Shot by Ghappar himself from inside a prison cell, he moves the camera with one hand and reveals his other to be handcuffed to a bed. Ghappar is confined to a tiny room with mesh and bars on a window. His clothes are dirty as are the walls, and his face carries an expression of anguish and exhaustion.

Ghappar is incarcerated in one of China’s notorious prisons for Uighurs, the Muslim population who live in the far western province of Xinjiang. The Uighurs, with their Islamic faith, Turkic language and ties to the cultures of central Asia, have long been viewed by the Chinese state with suspicion and have faced discrimination. Following two brutal attacks against pedestrians and commuters in Beijing in 2013 and in Kunming in 2014, which were blamed on Uighur separatists, this suspicion has morphed into systematic oppression.

Estimates suggest more than one million Uighurs are now incarcerated in a network of prisons across the region. China initially denied the existence of the prisons, then acknowledged them but said they were re-education camps established to counter extremism in the province. The state denies Uighurs are being used as forced labour and denies rumours of torture and other abuses. The camps are also winding down, the state has recently said.

It can be hard to probe the official Chinese party line: foreign media is pretty much banned from Xinjiang. Reporters who have been there have found their visas revoked, such as Buzzfeed’s China bureau chief Megha Rajagopalan, who was forced to leave China in 2018. Rajagopalan had reported extensively on the crackdown in Xinjiang. When media is allowed in, as the BBC has been, the visits are highly controlled and staged.

But with each passing week and month evidence that directly contradicts the party line finds its way into the outside world; shipments of human hair products from Xinjiang reach New York; drone footage of rows of people queuing, shackled and blindfolded, for trains appears; testimonies of sterilisation of Uighur women emerge. And now Merdan Ghappar’s video. It might be the most significant piece of evidence yet.

Sure it does not come close to showing the real horror of the camps, but it does something else. It personalises the Uighurs’ plight. We see his face; we look into his eyes. And through his video and the reports that have emerged around it we learn his own, unique story.

We know that Ghappar studied dance at Xinjiang Arts University and worked as a dancer before he became a successful model. We know that in 2009, he moved away from Xinjiang in search of other opportunities in China’s wealthier eastern cities. We know, from his relatives, that he was told to downplay his Uighur identity and refer to his facial features as “half-European” if he wanted to get ahead in his career. And we know that he was also apparently unable to register the apartment he bought with his own money in his own name, instead having to use the name of a Han Chinese friend. We know that throughout this period Ghappar was in regular touch with his uncle, Abdulhakim Ghappar, who fled China after his activism in Xinjiang made him a target (in 2009, for example, he handed out flyers ahead of a large-scale protest in the city of Urumqi), and that while his uncle says Ghappar is not political, his ties to his uncle might explain why he became a target.

We know that in August 2018 he was arrested and sentenced to 16 months in prison for selling cannabis, a charge many believe is false. We know he was released in November 2019, but that soon after police told him he needed to return to Xinjiang to complete a routine registration procedure and that there “he may need to do a few days of education at his local community”.

We know that on 15 January, his friends and family brought clothes and his phone to the airport where he boarded a flight and was escorted by two officers back to his home city of Kucha. And most significantly, we know that he somehow managed to not only keep, but use his phone and from this reveal some details of his own incarceration (initially in a squalid, unsanitary prison jail where he was surrounded by the sounds of other inmates screaming; later in the facility shown in the new video he says his “whole body is covered in lice”).

But we don’t know where he is today. Ghappar’s messages have stopped. No one has heard from him and authorities have not provided notification of his whereabouts.

There is an increasingly loud chorus of calls for what is happening in Xinjiang to be labelled a genocide – and this could definitely change how the international community responds to the situation. But as history has proved even if it is officially termed a genocide will it force us, on an individual level at least, to act differently?

Comparisons to the Holocaust come easily and one line of defence there, which has come up again and again, is that people didn’t act because people “didn’t know”. But that’s historically contested given how ubiquitous the camps were. There was a reason people on arrival at Auschwitz tried to rouge their cheeks to appear healthy – they knew.

What some historians have argued, though, which could partly explain the inaction of many, is that while people might have known, they didn’t understand. The truth was simply too abhorrent to fathom. And without understanding they didn’t truly know.

And that’s why Ghappar’s video and story is so important. As was the case with Anne Frank, and indeed recently with George Floyd, sometimes you need a face, a singular experience, to relate to the suffering of the whole. Stories that are granular touch people in ways that the bigger picture cannot always. News of the ill treatment of Uighurs is not new and yet within hours of Ghappar’s video circulating, crowds began protesting outside the Chinese Embassy in London.

Ghappar has made the Uighur suffering feel much more real and more personal. He could be our brother, our son, our neighbour, our friend. He’s not just a number or a news headline; he’s a face and a name. Let’s learn that name and tell his story.