Author of a book on the black vote in the USA, Darryl Pinckney tells Index about the issues that still plague voting in the USA 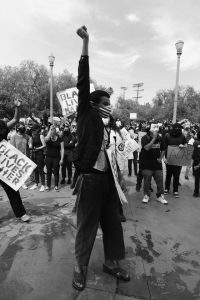 “Blacks known merely to talk about voting in certain towns in Alabama or Mississippi could get fired or have their businesses wrecked.”

This was six decades ago but harassment of black voters continues in today’s USA, writes acclaimed author Darryl Pinckney in his book Blackballed: The Black Vote and US Democracy. Originally published in 2016, the book has been republished this October with a new essay reflecting on Juneteenth, racial justice and protest in the context of Covid-19 and the death of George Floyd.

Pinckney, speaking to Index just days before the US elections on 3 November, says harassment can take several forms.

“You can have a boss who thinks you’re going to vote the way he doesn’t like, so he will tell you things that aren’t true. If you don’t have the resources or the imagination to look it up yourself you will believe him. [The boss might say] that if you owe child support and you to the polls they will arrest you when they have your name. And so you won’t go.”

Pinckney adds: “Election day is not a [public] holiday. It would be difficult to document but some bosses tell people ‘If you’re not back in an hour you’re fired’. You can’t wait in line – you’ll lose your job.”

Intimidation, he says, also happens at the polling station, all of which has contributed to low voter turnout in 2016, particularly amongst black people living in the key swing states. It’s for this reason, as Index reported earlier this year, that many organisations have emerged dedicated to improving transparency and information around how to vote.

As news comes in that already 70 million people have voted early, we may finally be seeing a positive shift, or at least a return to 2012 when Pinckney says an “enormous black voting block” contributed to Barack Obama’s second term win.

“There’s much better information today,” said Pinckney. “People are so alert to the possibilities of intimidation and voter suppression.”

“Early voter turnout is so overwhelming, probably for a number of factors, one being not trusting the process entirely so wanting to get in there. People are standing in line, two hours, three hours, five hours,” he said.

Pinckney believes that the protests surrounding the death of George Floyd have also played a role in this early voter turnout. We discuss how several years ago Index published an article from one of the leaders of Occupy Wall Street in which he was concerned that the movement would not have a lasting impact (compared to the rights movements of the 60s and 70s, he felt that the ease of gathering a crowd today due to the internet actually worked against its long-term goals). Pinckney believes that this year’s protests have managed to bypass this problem somewhat.

“The huge early voter turnout and maybe a higher youth vote than ever is a direct result of signing people up at the George Floyd protests. People were turning the protests into a registration drive,” he said, adding:

“The walk from the street to the voting booth got a lot shorter this summer.”

While Pinckney doesn’t know what exactly will happen this coming Tuesday, he says that he lives “with an optimist and so I have latched onto his wagon”.

“You have to not be a prisoner of history and know that history is manmade.”

Pinckney has written before about “Afro-Pessimism”, the deliberate withdrawal of political and social consciousness by black people. Today the situation feels different.

“I think that the Black Lives Matter movement and the police protests and by extension this examination of the part racism plays and how society is constructed is very much not Afro-Pessimism,” he said.

“A kind of activism is in the air.”

At the end of Blackballed Pinckney writes that there “are new names to learn: Li Wenliang, and then Joshua Wong, Agnes Chow, Shu Kei, Nathan Law, Isaac Cheng. We must act out our freedom, one masked, unnamed girl said in English to a camera during demonstrations on the anniversary of Hong Kong’s handover to China.”

What made Pinckney chose to highlight those who have been persecuted by the Chinese government as a note to end on?

“The George Floyd protests were global. But look who is really up against it, look who is putting themselves and everything, their lives, on the line. These really innocent-looking people in Hong Kong. They’re up against this authoritarian state. You must remember them and their names.”

“That kind of state is around the corner for a lot of us if we don’t say something now.”

Darryl Pinckney is the author of High Cotton, Black Deutschland, Out There and Busted in New York and Other Essays. His 2016 book Blackballed: The Black Vote and US Democracy has just been republished with a new essay for October 2020.