OPINION
Forced motherhood is an infringement on free expression

As various countries around the world seek to block women's rights to an abortion, Orna Herr highlights the free expression implications 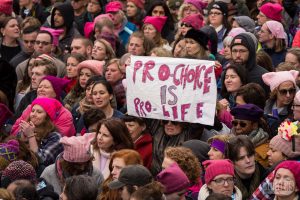 “I had a second trimester abortion,” tweeted Erica Goldblatt Hyatt, a Canadian living in the USA. “Our son never formed an airway. Had he survived birth he would have been brain dead. That wasn’t the life I wanted for him. It was the first true parenting decision I ever made.”

Goldblatt Hyatt’s story was included in a CNN article, along with stories from a mother of two who didn’t want more children and a woman who got pregnant at 16 with no family support, about the reasons women have abortions.

Since the passing of Roe v Wade in the Supreme Court in 1973, abortion has been enshrined in law in the USA. Some states have restrictions on access to abortion, but the ruling that it is a legal right has remained in place.

The passing of Ruth Bader Ginsburg in September, and her replacement by Amy Coney Barrett, has fuelled the fire of panic in women that this right could soon be snatched away, a panic they have felt since 2016 when Donald Trump said that if he is able to select enough justices for the bench, over-turning Roe v Wade “will happen automatically”.

The USA is not the only country where reproductive rights are being dismantled. Mass protests have broken out in Poland over the last few weeks after the constitutional court ruled that, even in the case of severe foetal abnormalities, women will be forced by law to carry the pregnancy to term. This is a further encroachment on reproductive freedom in a country that already has some of the most restrictive abortion laws in Europe.

The women of Northern Ireland are also facing barriers to reproductive freedom. Despite abortion being decriminalised in October 2019, access to clinics is severely lacking, prompting the Royal College of Obstetricians and Gynaecologists to write a letter, sections of which were published by the Independent on 26 October, warning of the risks to women.

“There have already been at least two cases of attempted suicide by women in Northern Ireland unable to access care,” it says, adding that there has been a dramatic increase in women “turning to unregulated methods of abortion during the pandemic.”

Reproductive rights are a freedom of expression issue. We do not only express ourselves verbally and artistically, we express ourselves through the choices we make about how we live our lives and what happens to our bodies. The decisions about when, if ever, to become a mother, and to how many children, are some of the biggest a woman can make. When states take control of this decision, they are taking control of our self-expression.

This is not to say that these decisions cannot be discussed and debated. Debate is at the heart of freedom of expression and that extends to the topic of abortion. People should be allowed to talk about the questions surrounding it, such as “when does life start?” For some it starts at the moment of conception, meaning abortion at any stage, even the very early weeks, would constitute ending a life. But this is not a consensus. And even if life does start at conception, that would not necessarily mean that abortion should be banned. After all, there are all kinds of practises that we allow as a society even if we question them morally because we believe banning them would ultimately go against freedom and autonomy.

Pro-life advocates must of course have their right to this view respected, and no one should force them to abort. But equally people attempting to force their beliefs on others, and control their actions to be in line with these beliefs, is when the defenders of freedom of expression must step in.

It should go without saying that the consequences of being forced to have a child are far-reaching. There’s the toll on mental health for one. According to research by scientists at King’s College London one in four pregnant women suffer from mental health problems. This can be even more extreme for those in unwanted pregnancies. In 2017 a young woman, who became known as Ms Y, sued the official health service in Ireland after she was not only denied an abortion but held against her will and forced medication to prolong the pregnancy. She had arrived in Ireland in 2014 seeking asylum and soon discovered she was pregnant. She said she’d been raped and was suicidal because of the pregnancy.

Research also shows that having a baby can hold a woman’s career back six years. Inflicting career disruptions on women by forcing them to continue with unwanted pregnancies is an infringement on their self-expression in the workplace that can have long-spanning repercussions. And then there are all the negative impacts it can have on relationships, finances, social support networks – the list could go on. None of these are trivial matters. Rather they’re all choices that are part of our free expression.

The Polish ruling also highlights that many abortions are because either the baby or the mother, or both, are seriously ill. Abortion is not always a lifestyle choice. It is often a very traumatic decision a woman is forced to make about an intended pregnancy. Heart-breaking as these decisions undoubtedly are, the most profound forms of expression are often the choices we make about our health and that of our families.

Incidentally, as is often the case with censoring behaviour, removing someone’s choice can actually be counter-productive. A study by the National Library of Medicine concluded that women who had had an abortion were more likely to have an intended pregnancy within the next five years than women forced to continue with an unwanted pregnancy. Diane Greene Foster, one of the academics who conducted the study, concluded: “Being able to access abortion gives women the opportunity to have a child later with the right partner, at the right time”. She added that a woman who is denied an abortion is likely to “face diminished opportunities to achieve other life goals, gain secure financial footing, and have a child she can cherish and support”.

Remaining childless, or having children with the right partner when it is the right time to do so, is an umbrella of self-expression under which so many other forms of expression shelter; expression through work, through lifestyle choices, through parenting ability. It is a form of expression which must remain in the hands of individuals and be kept out of the grips of the state.