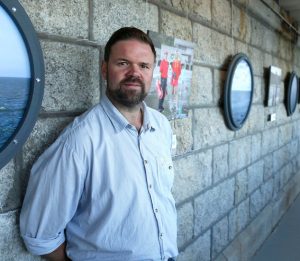 Index on Censorship is extremely concerned at the arrest of freelance photographer Andy Aitchison, who was arrested at his home last Thursday after covering a demonstration at a former military barracks in Kent earlier the same day. The barracks is being used to house asylum seekers in allegedly substandard conditions.

“What is happening at Napier Barracks is an issue of significant public interest,” said Jessica Ní Mhainín, senior policy research and advocacy officer at Index on Censorship. “We have every right to know what is going on there and we need journalists and photographers like Aitchison to be free to document and report on it. But instead of enabling journalists to report in the public interest, the authorities are actively preventing them from doing so.”

Five police officers went to Aitchison’s home to arrest him on suspicion of criminal damage. They seized his memory card and mobile phone, and took him to the police station even after he had shown them his National Union of Journalists membership card. They took his fingerprints and DNA, and detained him for almost seven hours before releasing him on bail until 22 February.

“This is a blatant and appalling press freedom violation, which has already – due to the terms of his bail – resulted in Aitchison being unable to cover the fire that broke out at the same barracks on Friday afternoon,” said Ní Mhainín. “We call for Aitchison’s immediate and unconditional de-arrest, and for his equipment – which should have never been seized in the first place – to be immediately returned to him”.

“Serious questions need to be asked about how this could have happened and why it is taking so long for remediation. Has the UK forgotten that it has committed to leading the Media Freedom Coalition? This is what censorship looks like – not media freedom,” Ní Mhainín said.

Index on Censorship has filed a Council of Europe alert.