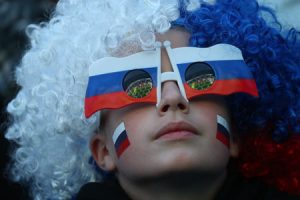 A Russian fan at the Euro 2020 match between Belgium and Russia. Stanislav Krasilnikov/Tass/PA Images

We continue today with Group B, which plays the deciding matches of the group stages today.

Unlike their relatively miserable performances on the football pitch, Russia can approach this particular contest as the clear favourites.

The group would be locked up after the first two games, with some sensational play from their three talismans: disinformation, oppressive legislation and attacks on independent media.

Russian disinformation, through the use of social media bots and troll factories, is well known, as is their persistent meddling in foreign elections which infringes on the rights of many to exercise their right to vote based on clear information.

Putin’s Russia has increased its attacks on free speech ever since the 2011 protests over a flawed election process. When protests arose once again all over the country in January 2021 over the detention of former opposition leader Alexei Navalny, over 10,000 people were arrested across the country, with many protests violently dispersed.

Police in the country must first be warned before a protest takes place. A single-person picket is the only form of protest that does not have this requirement. Nevertheless, 388 people were detained in Russia for this very act in the first half of 2020 alone, despite not needing to notify the authorities that eventually arrested them.

Human rights organisation, the Council of Europe (COE), expressed its concerns over Russian authorities’ reactions to the Navalny protests.

Commissioner Dunja Mijatović said: “This disregard for human rights, democracy and the rule of law is unfortunately not a new phenomenon in a country where human rights defenders, journalists and civil society are regularly harassed, including through highly questionable judicial decisions.”

Unfortunately, journalists attempting to monitor these appalling free speech violations face a squeeze on their platforms. Independent media is being deliberately targeted. Popular news site Meduza, for example, is under threat from Russia’s ‘foreign agents’ law.

The law, which free expression non-profit Reporters Without Borders describes as “nonsensical and incomprehensible”, means that organisations with dissenting opinions receiving donations from abroad are deemed to be “foreign agents”.

Those who do not register as foreign agents can receive up to five years’ imprisonment.

Being added to the register causes advertisers to drop out, meaning that revenue for the news sites drops dramatically. Meduza were forces to cut staff salaries by between 30 to 50 per cent.

Belgium is relatively successful in combating attacks on free speech. It does, however, make such attacks arguably more of a shock to the system than it may do elsewhere.

The coronavirus pandemic was, of course, a trying time for governments everywhere. But troubling times do not give leaders a mandate to ignore public scrutiny and questioning from journalists.

Alexandre Penasse, editor of news site Kairos, was banned from press conferences after being accused by the prime minister of provocation, while cartoonist Stephen Degryse received online threats after a cartoon that showed the Chinese flag with biohazard symbols instead of stars.

Incidents tend to be spaced apart, but notable. In 2020, journalist Jérémy Audouard was arrested when filming a Black Lives Matter protest. According to the Council of Europe “The policeman tried several times to prevent the journalist, who was showing his press card, from filming the violent arrest of a protester lying on the ground by six policemen.”

There is an interesting debate around holocaust denial, however and it is perhaps the issue most indicative of Belgium’s stance on free speech.

Holocaust denial, abhorrent as it may be, is protected speech in most countries with freedom of expression. It is at least accepted as a view that people are entitled to, however ridiculous and harmful such views are.

The law means that anyone who chooses to “deny, play down, justify or approve of the genocide committed by the German National Socialist regime during the Second World War” can be imprisoned or fined.

Belgium has also considered laws that would make similar denials of genocides, such as the Rwandan and Armenian genocides respectively, but was unable to pursue this due to the protestations of some in the Belgian senate and Turkish communities. It could be argued that in some areas, it is hard to establish what constitutes as ‘denial’, therefore, choosing to ban such views is problematic and could set an unwelcome precedent for future law making regarding free speech.

Comparable legal propositions have reared over the years. In 2012, fines were introduced for using offensive language. Then mayor Freddy Thielemans was quoted as saying “Any form of insult is from now on [is] punishable, whether it be racist, homophobic or otherwise”.

Denmark has one of the best records on free speech in the world and it is protected in the constitution. It makes a strong case to be the lowest ranked team in the tournament in terms of free speech violations. It is perhaps unfortunate then, that they were drawn in a group with their fellow Scandinavians.

Nevertheless, no country’s record on free speech is perfect and there have been some concerning cases in the country over the last few years.

2013 saw a contentious bill approved by the Danish Parliament “reduced the availability of documents prepared”, according to freedominfo.org. Essentially, it was argued that this was a restriction of freedom of information requests which are vital tool for journalists seeking to garner correct and useful information.

Acts against freedom of speech tend to be individual acts, rather than a persistent agenda.

Impartial media is vital to upholding democratic values in a state. But, in 2018, public service broadcaster DR was subjected to a funding cut of 20 per cent by the right-wing coalition government.

DR were forced to cut around 400 jobs, according to the European Federation of Journalists, an act that was described as “revenge” at the time.

There have been improvements elsewhere. In 2017, Denmark scrapped its 337-year-old blasphemy law, which previously forbade public insults of religion. At the time, it was the only Scandinavian country to have such a law. According to The Guardian, MP Bruno Jerup said at the time: “Religion should not dictate what is allowed and what is forbidden to say publicly”.

The change to the law was controversial: a Danish man who filmed himself burning the Quran in 2015 would have faced a blasphemy trial before the law was scrapped.

In 2020, Danish illustrator Niels Bo Bojesen was working for daily newspaper Jyllands-Posten and replaced the stars of the Chinese flag with symbols of the coronavirus.

Jyllands-Posten refused to issue the apology the Chinese embassy demanded.

The Council of Europe has reported no new violations of media freedom in 2021.

A good record across the board, Finland is internationally recognised as a country that upholds democracy well.

Index exists on the principle that censorship can and will exist anywhere there are voices to be heard, but it wouldn’t be too crass of us to say that the world would be slightly easier to peer through our fingers at if its record on key rights and civil liberties were a little more like Finland’s.

Add that together and you have a country with good free speech protections.

That is not to say, though, that when cases of free speech violations do arise, they can be very serious indeed.

In 2019, the Committee to Project Journalists (CPJ) called for Finnish authorities to drop charges against journalist Johanna Vehkoo.

A statement by the CPJ said: “Junes Lokka should stop trying to intimidate Johanna Vehkoo, and Finnish authorities should drop these charges rather than enable a politician’s campaign of harassment against a journalist.”

“Finland should scrap its criminal defamation laws; they have no place in a democracy.”

Indeed, Finnish defamation laws are considered too harsh, as a study by Ville Manninen on the subject of media pluralism in Europe, found.

“Risks stem from the persistent criminalization of defamation and the potential of relatively harsh punishment. According to law, (aggravated) defamation is punishable by up to two years imprisonment, which is considered an excessive deterrent. Severe punishments, however, are used extremely rare, and aggravated defamation is usually punished by fines or parole.”

The study also spoke of another problem, that of increased harassment or threats towards journalists.

Reporter Laura Halminen had her home searched without a warrant after co-authoring an article concerning confidential intelligence. 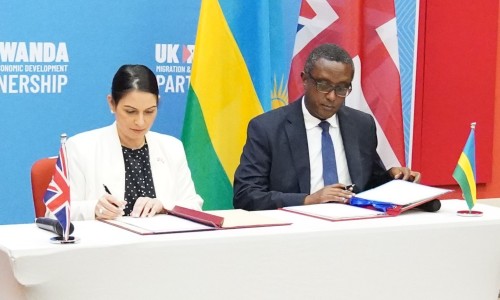 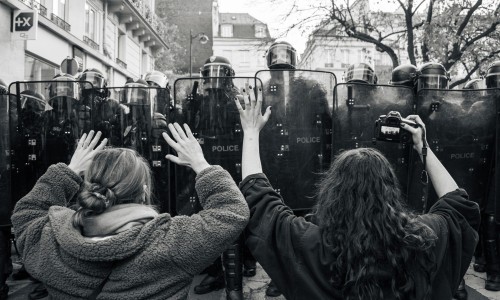