NEWS
Myanmar keeps it poets locked up despite prisoner release

Myanmar’s military authorities this week began to release more than 2,000 people who had been jailed as part of the protests against the country’s military coup in February. Those released included journalists, actors and other celebrities.

Military spokesman Zaw Min Tun said earlier this week that around 2,300 people were being released.

“They took part in protests but not in leading roles. They didn’t participate in violent acts,” he told the news website Irrawaddy.

Myanmar’s Assistance Association for Political Prisoners (AAPP) said in a statement: “The junta detained innocents. Torture is used as policy by this military, detainees will suffer long-term physical and mental illness. There was no recognition of the injustice and suffering caused today, and no mention of the right to compensation.”

“They are arresting people who should never have been detained in the first place, those released will be threatened and suffer from trauma. They will need rehabilitation and understanding of the injustice they experienced”, said AAPP joint secretary U Bo Kyi. “Any release must aim at real reform, including the release of Aung Sun Suu Kyi. Violence must end, and those who committed torture and murder brought to justice.” 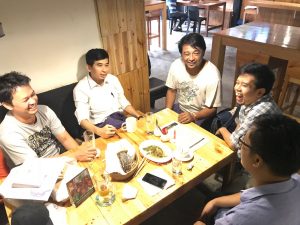 Poets in Myanmar in 2018 before the current horrors. Maung Yu Py is far right, laughing

Not everyone detained following the coup is so lucky and the country’s poets are suffering at the military’s hands more than most.

In the summer issue of Index on Censorship magazine, out later this month, we publish the poems of K Za Win and Khet Thi, who have both died at the hands of Myanmar’s military in recent months.

Other poets’ lives have been spared but they remain in jail despite the prisoner release.

Maung Yu Py, a household name in contemporary Burmese poetry, was arrested at a protest in his hometown of Myeik on 9 March. Two months later, he was sentenced to two years in Myeik prison for “making statements conducing to public mischief” where he remains today.

Fellow poet Ko Ko Thett has translated his work “A poem for real” into English for Index. We call for Maung Yu Py’s release.

A poem for real

backed up by strongboxes

I am with a token of a girlfriend.

Having to endure life is real.

I don’t know why

I am Charlie Chaplinette over and over again.

Lest someone should thieve,

the plastic cup is chained

to the charity water tap,

exactly the kind of installation art

Every time I sit down for a poem

I’ve gotta get up for a dog’s yelp.