There is a highly symbolic scene in Marighella, a Brazilian film that has only reached movie theatres now, even though it has been ready for release since 2019. An American agent (Charles Paraventi) praises Police Chief Lúcio (Bruno Gagliasso) for the inventiveness with which the revolutionary group Ação Libertadora Nacional (ALN) infiltrated radio stations, broadcasting a subversive message using only a tape recorder and circumventing the censorship. The sequence fulfils at least two functions: to reinforce the deep ties between the brutality of the Brazilian military dictatorship and North American imperialist interests; and reinforcing political and social resistance through creativity, a typically Brazilian trait often described as jeitinho or malandragem – a way of circumventing the bureaucratic norms.

I evoke this idea of trickery because it is at the centre of the imbroglio involving the release of Marighella, a political biopic of Carlos Marighella, a Brazilian Marxist-Leninist communist, politician and writer.

Marighella, born in 1911, was regularly in and out of jail between the 1930s and 1950s for criticising the Brazilian government as an active member of the Communist Party.

In 1966, he published The Brazilian Crisis, which argued for an armed struggle against Brazil’s military dictatorship which had been installed as a result of the 1964 coup in the country. Two years later, Marighella was expelled from the Communist Party and he went on to found the ALN, which became involved in robbing banks to finance guerilla warfare and the kidnapping of high profile individuals to win the release of political prisoners.

After the ALN’s involvement in the kidnapping of US Ambassador Charles Burke Elbrick, Marighella became a target. On 4 November 1969, he was ambushed by the police in São Paulo and shot dead.

The release of the biopic during the presidency of Jair Bolsonaro, an apologist of Latin American military dictatorships and nostalgic for the bloodthirsty Brazilian regime that acts as the de facto villain of the film, is timely.

Marighella was supposed to be released in early 2020 but Ancine, the government agency that works to promote national cinema in Brazil, withheld funding of R$1 million (roughly £134,000) for its distribution, alleging a problem in the accounts for another production by O2 Filmes, the film’s producer.

Celebrated actor Wagner Moura, who debuts here as the director, had no doubt that the film was censored.

“It was a time when Bolsonaro was talking about filtering and regulating Ancine,” Moura said at a press event about the movie.

Brazil hasn’t had a censorship department since the end of the military dictatorship, which ended with popular elections in the mid-1980s. The constitution that was enacted at that time was so influenced by the “years of lead” (as the times under the regime are known) that censorship was expressly prohibited by the law.

There are, of course, age rating systems and, with the justification of “protecting the innocence of children”, certain films, events or exhibitions are only released for certain ages, and/or with parents’ authorisation, very much alike the ratings systems in the US or the UK. That’s why, as long as it feels the need to comply with the Constitution, the current far-right Brazilian government needs to be at least as creative as the speeches it seeks to curb.

Hence Moura’s revolt, saying that there would be “veiled censorship”, different than what happened during the dictatorship, applied as a state policy.

“Today they infiltrate people in these agencies, and they make anything impossible to happen. That’s what they did with Marighella. They found a way to make the release impossible, from a bureaucratic point of view,” he said in an interview with Veja magazine.

Without this being state policy, made official by documents, it is difficult to say that there is de facto censorship. Carlos Marighella symbolises much of what the radical wing of the government despises, finding it absurd that public money is used to finance “non-aligned” works.

Bolsonaro himself has even threatened Ancine with extinction because the productions it finances are no longer “aligned” with the government. His government’s special secretary of culture, former actor Mário Frias has even tweeted a response to Moura’s statements: “Did you think I was going to get public funds for this pamphlet garbage?”

This type of declaration by a state representative helps to understand the Brazilian Government’s relationship with culture. Its origin lies in one of the ideological consequences of the end of the military dictatorship, in which some far-right intellectuals and disgraced military personnel came to the conclusion that the left had “won” the “cultural war”, infiltrating universities and fostering ideologically aligned artistic production .

This conclusion was, in part, a reaction to the establishment of the National Truth Commission, dedicated to revealing and documenting the crimes against humanity committed by the dictatorship, and the result of a bad reading (and also in bad faith, it should be said) of the theories of Antonio Gramsci, an Italian Marxist intellectual.

The rise and permanence of the extreme right in power, they think, would be conditioned to the dismantling of an apparatus of cultural incentive and promotion, developed over the years of redemocratisation. This explains the presence of someone like Frias in charge of culture and the use of jeitinho to impede the exhibition of “misaligned” films such as Marighella.

This institutional trickery, in this case at least, has backfired, since a work is not an isolated object of its historical context. Since release – without the benefit of government funding –  Marighella has become the most watched Brazilian production of the last two years, with 100,000 spectators in 300 theatres across the country. This is low in a historic context, as the screen quota which usually ensures that cinemas show a certain amount of locally produced content to counter the influx of foreign films is currently suspended while a new proposal, suggest by Brazil’s opposition parties, is considered.

Despite its success, the film has problems – from the annoying overacting to the lack of real interest in its main character – and it perhaps wouldn’t be so celebrated in another time. In Brazil at the end of 2021, with all the absurdities committed by action or inaction of the Bolsonaro government, Marighella has become the film to be seen. 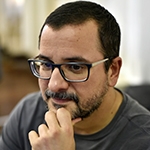