NEWS
Richard Ratcliffe: The UK Government needs to look long and hard at its hostage policy

As Richard Ratcliffe enters day 16 of a hunger strike to protest against UK government inaction in the case of the continuing detention of his wife Nazanin Zaghari-Ratcliffe in Iran, he says it is not the lack of food that is his biggest worry.

“It is the cold,” he says from his makeshift tent village outside the Foreign and Commonwealth Office in Whitehall, just a short walk from the Houses of Parliament. Last Friday – Guy Fawkes Night – the mercury dipped to below freezing as a candlelit vigil was held to raise awareness of this wife’s plight, who has been detained in Iran for more than five years.

Nazanin, who was working for the Thomson Reuters Foundation at the time of her arrest, was sentenced to five years in prison in 2016 for “plotting to topple the Iranian regime”. As the end of her sentence approached, Nazanin was told she faced new charges of “propaganda activities against the government”. In April 2021, she was sentenced to a further year in prison. I spoke to Richard at the time in our podcast.

It is clear that Nazanin is clearly a pawn in a game of one-upmanship between the British and Iranian governments. There is no guarantee that she will be released even after serving the new sentence.

This is why Ratcliffe is carrying out his protest – to make the British government recognise that its strategy towards Iran has failed. 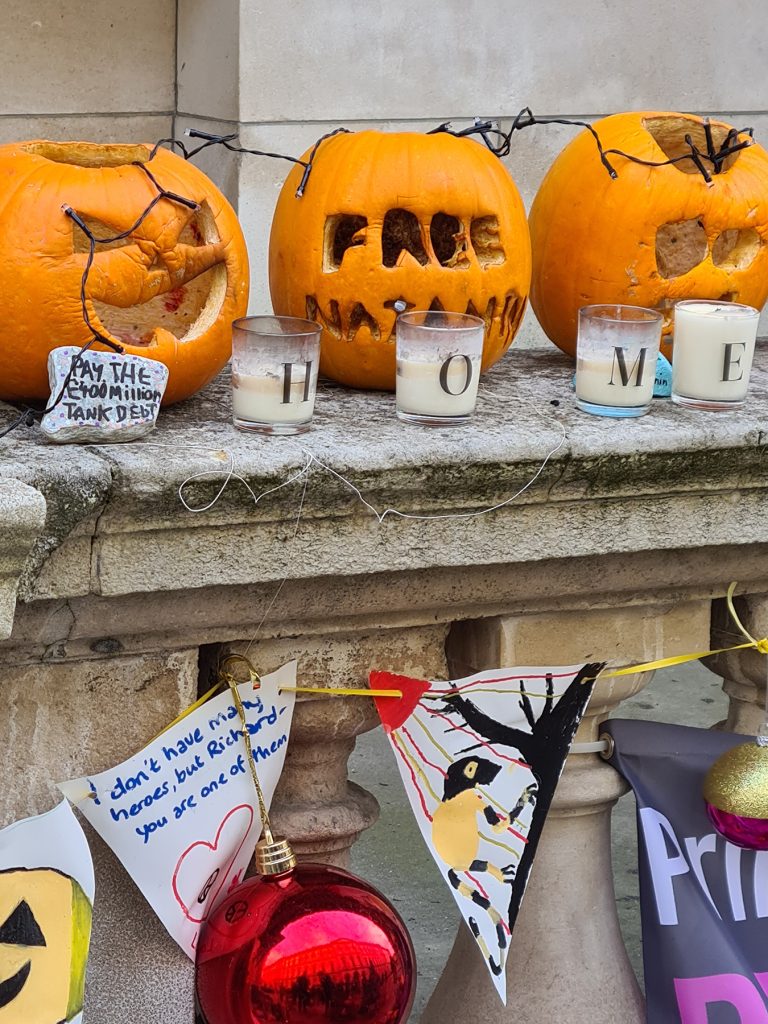 With his quilted jacket and woolly hat and mittens, Ratcliffe looks like many of the nearby rough sleepers. Yet few of those on nearby Whitehall are surrounded by pebbles painted by young children and carved pumpkins or have their tents festooned with fairy lights. Still fewer have a pile of Amazon deliveries from well-wishers.

Camped out in the heart of British Government, Ratcliffe has been visited by a steady stream of MPs, including the Conservative MP for Ipswich Tom Hunt today.

This in itself is quite unusual.

“I have certainly been visited by more opposition MPS than those in the government,” says Ratcliffe. “I have had a lot of visits from the Labour front bench. Of those in the Government that did visit, very few wanted their picture taken.”

He has not been short of other well-known visitors wishing him well, including the author Kathy Lette, Victoria Coren and TV presenter Claudia Winkelman.

Ratcliffe says that despite promises from former Foreign Secretary Dominic Raab, little seems to be happening in official channels to secure the release of his wife.

“There have been no negotiations of substance for a while,” he says.

As the light faded and the temperature dropped again tonight, Ratcliffe’s hunger strike continued. Many experts say that the human body can endure around 25 days without eating before permanent damage occurs.

Ratcliffe plans to continue while he can.

“One of the things I have heard from other hunger strikers is that you eventually start closing in on yourself. That hasn’t happened so far,” he says. “You have to listen to your body though.”

Richard’s family and friends are naturally worried for his well-being and many are taking it in turns to keep his spirits up. As I speak to him, his mum – resplendent in a multi-coloured coat that belies the seriousness of the situation – pops over with a hot water bottle to keep the cold at bay.

Despite the cold and the growing concern of the effects of not eating, Ratcliffe will remain outside the Foreign and Commonwealth Office for now and certainly until later this week when Iran’s vice president Dr Ali Salajegheh leaves the UK after attending COP26 in Glasgow.

When the Government’s focus turns away again from the global ecofest, it needs to think about how it deals with Iran.

He says, “I don’t think the Foreign Office understands Iran properly. The Government also needs to look long and hard at its hostage policy and its ineffectiveness.”

Ratcliffe is clear on one thing that would help secure Nazanin’s release – the British Government could pay the £450 million that Ratcliffe and many others believe say it owes to the Iranian government. The money was paid to the UK in the 1970s by the then Shah of Iran to buy Chieftain tanks and armoured vehicles. When the Shah was deposed, Britain sold the vehicles instead to Iraq but kept the money.

Sign the petition to Free Nazanin here and, if you are in the UK, write to your MP.

One response to “Richard Ratcliffe: The UK Government needs to look long and hard at its hostage policy”