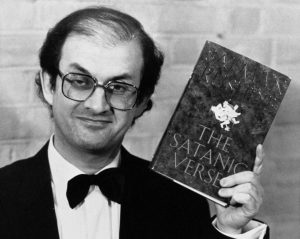 A fatwa was issued against all those involved in the publication of The Satanic Verses. Photo: Adam Butler/PA Archive/PA Images

Norwegian freedom of speech foundation Fritt Ord has called for a state commission to investigate police handling of the attempted murder of a publisher three decades ago.

In 1993 William Nygaard – a former head of NRK and long-time director of the Aschehoug publishing house – was shot outside of his home in the Oslo suburb of Slemdal. Nygaard was left for dead on the street after being hit three times from behind as he opened his car door.

The call to look at the case again comes after one of the prime suspects in the case was tracked down by a team of journalists working for Norwegian public broadcaster NRK.

Although nobody claimed responsibility for the attack at the time, the shooting was widely believed to be linked to Nygaard’s support for Salman Rushdie and Aschehoug’s publication in Norwegian of Rushdie’s book The Satanic Verses. At the time Rushdie was the subject of a fatwa by the then Supreme Leader of Iran Ayatollah Ruholla Khomeini for heresy. Aschehoug is Norway’s second largest publisher and has a track record of publishing controversial titles.

Fritt Ord director Knut Olav Åmås has suggested that an independent investigation into the handling of the case is warranted due to the longstanding failure of the Oslo police to make progress despite ample evidence.  Åmås has singled out what he sees as strange police behaviour and a failure to follow up on key leads.

“[The handling of the case] should be investigated by an independent commission due to the considerable and surprising number of strange things that have happened, not least in the Oslo Metropolitan Police ever since the murder attempt took place in 1993,” Åmås told Index on Censorship. Åmås has specifically been critical of the Oslo’ police’s failure to focus on the fatwa in the crucial period following the shooting, and the decision to let local police investigate a case of national and international significance.

Witnesses to the shooting used photofits to produce an image of the attacker at the time, but until recently nobody was ever publicly identified or charged for the crime. Last month however the name of one of the suspects was revealed by the NRK team after he was tracked down in Beirut. Lebanese national Khaled Moussawi, who was resident in Norway when the attack happened, has been accused, though he denies all claims. As part of the accusations, he is alleged to have been assisted by a still-unnamed employee of the Iranian embassy in Oslo.

“It is a very important case, both as an integrated part of the whole Rushdie affair, and also as an important precursor to the [Danish] cartoon controversy, where Islamic regimes´ pressure on freedom of expression became a dramatic global event.” says Åmås, who is a former culture editor at Norway’s leading broadsheet Aftenposten.

Moussawi lived in Norway until 1996 and regularly attended events at the Iranian embassy. Despite having a son born in Oslo his family were never granted citizenship and he was eventually deported from the country and returned to Lebanon, inadvertently complicating the investigation into the Nygaard shooting.

In 2008 the Norwegian Prosecuting Authority determined that the case should be reopened and responsibility was shifted from the Oslo Metropolitan Police to Kripos, Norway’s National Criminal Investigation Service .

Åmås says that the latest revelations mean it may finally be possible to bring Nygaard’s attackers to justice.

“It shows that Norwegian police has evidence that they should act upon, by issuing a so-called Red notice through Interpol for example – and also working with Lebanese authorities to make it possible to bring him [Moussawi] to Norway for interrogation. The same should happen to the Iranian who has been charged.” Åmås believes.

If the unnamed Iranian embassy staff member is convicted and a link is proven between Iran’s embassy and the shooting, it would also retrospectively establish the crime as an act of state-sponsored terrorism rather than attempted murder.

The Iranian Embassy in Oslo has denied the claims. “This type of allegation…is completely without basis, and we strongly reject this allegation,” it told NRK.

Moussawi also gave an extensive interview to NRK in Beirut when his identity was revealed, claiming to have been unaware of his status as one of the prime suspects. He also repeatedly denied any involvement with Hezbollah, the Lebanese religious and political movement with close ties to Iran that endorsed the fatwa against Rushdie.

“I have never been active in Hezbollah, either politically, religiously or socially,” Moussawi told NRK. “There was no political activity in the embassy. We drank tea, ate and read from the Koran,” he said.