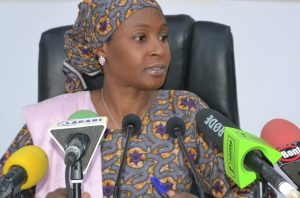 Nigerien journalist Samira Sabou, winner of Index on Censorship’s Freedom of Expression Awards 2021 in the journalism category, has been handed a one-month suspended prison sentence and a fine of 50,000 FCFA (around £65) for circulating an article on drugs trafficking in the country. The sentence was handed down by the courts despite her house being searched without a warrant and Sabou being questioned without a lawyer being present.

The article – Strange Days for Hashish Trafficking in Niger – reported on the trafficking of cannabis through West Africa to North Africa, and the seizure by Nigerien authorities of a large shipment, some of which later went missing.

“On 26 May 2021, I posted an article on drug trafficking in the country,” says Sabou. “The following day I was summoned by an individual who called me on the phone. He told me that he was from the anti-drug unit and that I must come immediately. He didn’t tell me why. I told him that I would first call my lawyer and I would get back to him. But I was told that if I did not show up immediately he would send agents to look for me.”

Within 30 minutes at least 10 people showed up at Sabou’s house to search it.

“After reminding them that they could not come to my home and search it without a warrant, there was a fight,” she says. “They handcuffed my husband and took his phone to prevent him from calling my lawyer. They also confiscated my phone maybe because I had posted on social media about what was happening. In the face of legal harassment against me, it has become a habit of mine to make society my witness through Facebook posts.”

“Later that day police officers from the Central Office for the Repression of Illicit Trafficking in Narcotic Drugs (OCRTIS) came to take me in for questioning. They begged my husband to let me go with them, still without a warrant, and without my lawyer. And all this for a simple post on Facebook. I am neither a murderer nor a drug dealer, let alone a fugitive. I am a simple journalist!”

Sabou was taken against her will to the OCRTIS premises and interrogated. Following this, OCRTIS filed a complaint against Sabou for indirect defamation  and she was summoned on 6 June to the Directorate of the Judicial Police (DPJ).

“At this stage I would like to point out that no responsible and ethical judge would agree to proceed given that the complainant (OCRTIS) had me forced from my home, without a warrant, and had questioned me without a lawyer. It is outrageous, completely senseless in a country of  ‘rights’. And all this for sharing a post on Facebook!” she says.

On 9 September Sabou appeared before the Tribunal de Grande Instance Hors Classe in Niamey, where she was prosecuted for “defamation” and “diffusing information to disrupt public order” under the cyber crime law of 2019.

However on 27 December 2021, ORCTIS withdrew its complaint but her prosecution did not stop there.

“The public prosecutor’s office did not honour its part of the agreement and instead of dropping charges, asked for a conviction. On 3 January this year I was found guilty of defamation. I received a one-month suspended prison sentence and a fine of 50,000 FCFA. My colleague Moussa Aksar was also found guilty, with a two-month suspended sentence and a fine of 100,000 FCFA.”

It is not the first time Sabou has had brishes with the authorities.

In June 2020, she was arrested and charged with defamation in connection with a Facebook post highlighting corruption, specifically possible overbilling by the country’s defence ministry. She spent over a month in detention before eventually being discharged and released.

Sabou says, “The most incredible thing about this affair is that we are not the only Nigerien journalists, citizens and media to have shared the article. But we are the only ones to have been punished by the justice system in such an extreme way. It is very clear that this is all part of a broader campaign of harassment against me and the work that I do, a campaign to silence me.”