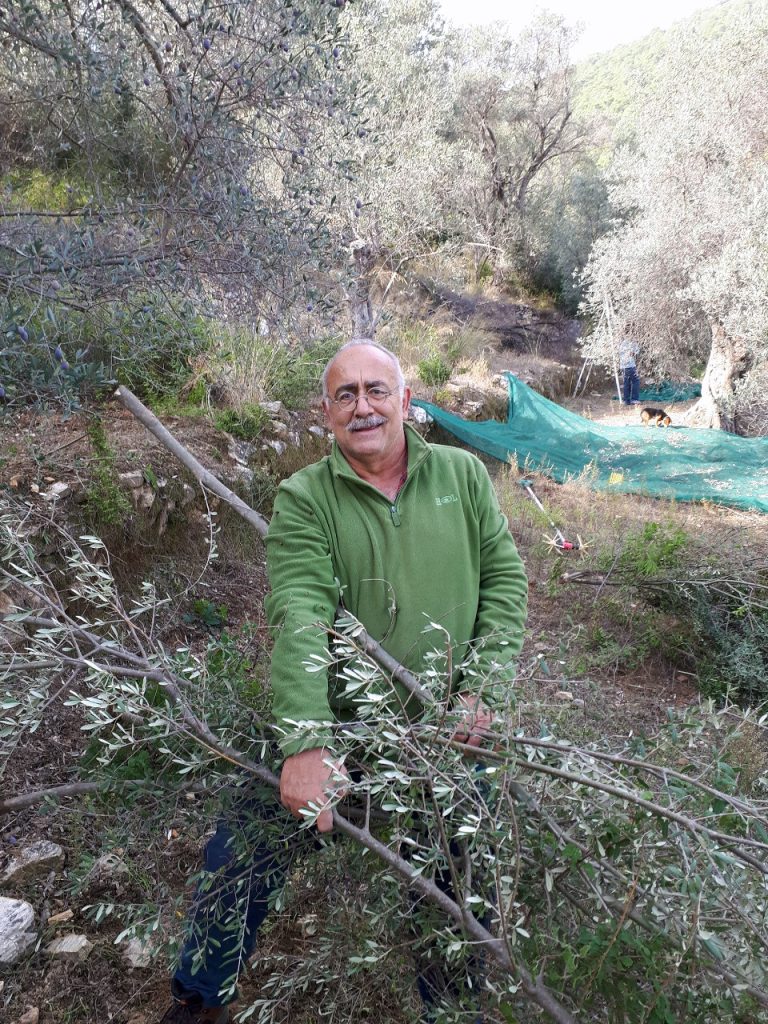 Sevan Nişanyan at home in Samos

A prominent Turkish-Armenian academic faces deportation from Greece after being labelled an “undesirable foreigner” in what he sees as punishment for creating a database of Greek placenames and how they have changed through history.

Sevan Nişanyan, born in Istanbul in 1956, is a linguist and compiler of the hugely comprehensive Etymological Dictionary of the Turkish Language.

In 2012, he wrote a blog post about free speech arguing for the right to criticise the Prophet Mohammed which incensed then prime minister and now president Recep Tayyip Erdogan.

Speaking to Index in an interview at the time, Nisanyan said: “I received a call from [Erdogan’s] office inquiring whether I stood by my, erm, ‘bold views’ and letting me know that there was much commotion ‘up here’ about the essay. The director of religious affairs, the top Islamic official of the land, emerged from a meeting with Erdogan to denounce me as a ‘madman’ and ‘mentally deranged’ for insulting ‘our dearly beloved prophet’”.

The following year he was sentenced to 13 months in jail for his “insults”.

While in prison, he was further charged with violations of building regulations in relation to the village of Şirince in Turkey’s Izmir Province and particularly the mathematical research institute established there in 2007 by Ali Nesin and in which Nasanyan was heavily involved.

Nişanyan was charged with 11 violations of the code leading to a total prison term of more than 16 years.

At the time, he and others were convinced that this was a political case, because jail time for building code infringements is almost unheard of in Turkey and he was merely being punished for his earlier views and blog post.

In 2017, Nişanyan escaped from the Turkish low security prison where he was being held and travelled by boat to Greece, where he claimed asylum and was granted a temporary residence permit.

He has since been living on the island of Samos and married a Greek citizen in 2019. While there he successfully applied for an Armenian passport and dropped his asylum application.

Everything changed on 30 December 2021 when he was denounced by the Greek police as a national security threat. His supporters say his name was added to what is known as the EKANA list of undesirable foreigners, administered by Greece’s Ministry of Public Order. At a recent press conference, Nişanyan claimed the reasons for the inclusion of his name on the list is considered a state secret.

The fast-growing use of the EKANA list has been called a “particularly worrying development” by the European Parliament’s Policy Department for Citizens’ Rights and Constitutional Affairs.

“The Ekana list has become a favoured tool of the Greek police, primarily used against refugees who are denied asylum,” says Nişanyan.

Nişanyan says he has no concrete idea why his own name is on the list but he can speculate.

“There have been all sorts of accusations of me working against Greek national ideas,” he says.

He suspects it may be related to his creation of the Index Anatolicus, “a website looking at the toponomy of placenames, the authoritative source on the name changes to 53,000 Turkish places”.

“I recently decided to expand into Greece, North Macedonia, and Armenia,” he says.

He recognises it is a sensitive issue. In 1923, Greece and Turkey agreed to a population exchange after the fall of the Ottoman Empire which saw 1.3 million people made refugees.

“A hundred years ago, none of the towns and hamlets in northern Greece had Greek names. I have been accused by lots of insignificant people that this was a grave betrayal of the Greek motherland. That is absurd.”

On 7 January, the court ordered Nişanyan’s release saying he presented no risk of fleeing but gave him 15 days to leave the country voluntarily. He appealed against the ruling but this was thrown out on Thursday 13 January, meaning he must now leave by 22 January or face forced deportation. His request to be removed from the EKANA list has also been turned down. Nişanyan has appealed both decisions with the Administrative Court of the First Instance in Syros.

Nişanyan claims he is not a threat and that deportation would be particularly harsh on his wife, who is seriously ill.

He believes he has also become persona non grata as a result of a less welcoming attitude towards foreigners in the eastern Aegean in recent years.

“There has been enormous panic and paranoia over the refugees. Three years ago, people in Samos were divided on the refugee issue. Now you can be literally lynched if you say anything positive about refugees. It is a huge emotional mobilisation against all refugees and not surprisingly, part of that hostility has been directed towards Westerners and the NGOs who have ‘invaded’ the islands over the past few years.”

Where can Nişanyan go?

“I am tired and getting old. My wife’s health is a huge disaster. My normal instinct would be to stay and fight as I have been a fighter all my life. Now I am a weary,” he says.

“My three grown children are in Turkey and I have property there. However, I cannot go back unless there is some sort of presidential pardon.”

“The reasonable thing would be to go to Armenia, sit out the storm and come back some time,” but says that his chances of getting back to Greece appear slim.

It is also unclear whether his wife will be well enough to accompany him.

Nişanyan hopes the government comes to it sense and reconsiders an “utterly stupid decision which was obviously taken at the instigation of a paranoid and ignorant police force”.

He says, “I don’t think ever in the history of this country has a person who has not committed any crime whatsoever been deported to Armenia, historically one of Greece’s closest friends. It doesn’t make any political sense.”

Scott told Index, “It is ironic that Sevan is hated in Turkey as an Armenian and in Greece as a Turk – and in both countries, as an outspoken intellectual who challenges conservative beliefs and nationalist sensibilities.

“He fled from a Turkish prison to a Greek island and embraced it as his new home; sadly, in recent years the Greek islands have become more and more hostile to foreigners as the refugee crisis worsens, and Sevan is a victim of this development.

“He is a big local presence on Samos, and receives a steady stream of visitors from Turkey and elsewhere – clearly, this has not gone down with locals, or with police,” she said.

“Sevan’s scholarly work on the etymological roots of place names raised hackles in Turkey and his proposal of a similar project on Greek place names has had a similar effect. Anything that challenges the existing nationalist narrative in both countries is, of course, highly controversial. It is beyond absurd that this academic – outspoken though he may be – presents a national security threat to Greece.”

Nişanyan also claims support for his case at the highest levels in the country – “former prime ministers, people high up in the judiciary system and journalists”.

“They seem shocked,” he says. “They cannot imagine something like this happening in a presumably democratic country.