NEWS
'The Amazon is a lawless land'

Journalist Dom Phillips and Bruno Araújo Pereira went missing in the Amazon in Brazil. Index spoke to one of the people who last saw them 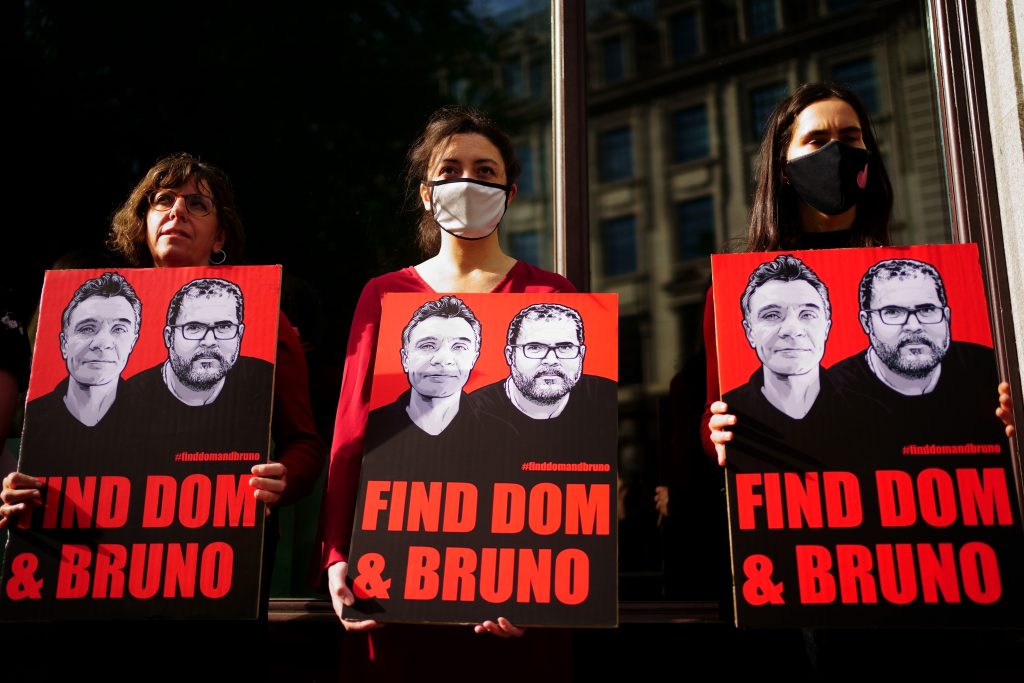 Supporters at a vigil outside the Brazilian embassy in London for Dom Phillips and Bruno Araujo Pereira. Credit: Victoria Jones/PA Images

Another day in Brazil without any news of British journalist Dom Phillips and Bruno Araújo Pereira. The pair have been missing in the Vale do Javari region, in the Brazilian Amazon, since 6 June. They were last seen as they left the São Rafael riverside community, on their way to the city of Atalaia do Norte.

Phillips, a journalist who writes for the Guardian, has lived in Brazil for almost 15 years. Passionate about the Amazon, the largest rainforest in the world, he has travelled extensively in the region, covering, among other subjects, the environmental crisis in Brazil and issues that plague indigenous communities. At the time of his disappearance he was working on a book about the environment, with support from the Alicia Patterson Foundation. Pereira, a long time official of Brazil’s Indigenous rights organisation, is a former employee of the National Foundation for the Indian (FUNAI), an agency of the Brazilian government.

Both were travelling by boat on the Itaquaí River, in the Vale do Javari region, which is close to the border with Peru. Index spoke to Paulo Marubo, executive director of the Union of Indigenous Organizations of the Javari Valley (Univaja), who was one of the last people to see the pair. He said they were there visiting Univaja’s team on the border of the indigenous reserve. On Saturday, they were all threatened by a group of miners and developers, carrying guns.

“Dom even took a photo of these gangs (showing their guns), which got lost with his disappearance, and they left indignant about it. On Sunday they went out and stopped at a village called São Rafael, where they looked for a man called Churrasco to deal with a lake management project. But he wasn’t there. After they left, we didn’t hear from them anymore,” Marubo told Index.

Marubo said that those at the forefront of indigenous movements often receive threats. He added that the developers feel supported by the current Brazilian president, Jair Bolsonaro, who does not help the indigenous population or protect the lands that are being destroyed. Thus, they operate in a situation where Univaja constantly fight with the state, not just criminal gangs.

“An example of this is Bruno himself, who asked for a license from the current government, which is anti-indigenous,” he said.

In a statement from Tuesday, Bolsonaro, who has not hidden his support of development projects in the Amazon, blamed the missing men rather than the gangs that operate out of the Amazon and make it so dangerous.

“Two people in a boat, in a completely wild region like this, is an adventure that isn’t recommendable for one to do,” he said. “Anything could happen — an accident could happen, they could have been executed — anything.”

The executive coordinator of Univaja has also been targeted by a fisherman, known as Nei, who was interrogated and released by the police after the disappearance of Phillips and Pereira.

In the region where they disappeared, many riverside peoples live, in places that are difficult to access. These areas are rife with crime, such as drug trafficking and illegal deforestation, commanded not only by Brazilians but also by Peruvians and Colombians. All these groups seek absolute control of the region, so the risk to the lives of those who speak out against them or fight for the preservation of the Amazon is high. In Pereira’s case, he had already been threatened by loggers and even fishermen.

There are many examples that show the difficulties and dangers that plague the Amazon region. One of the most famous to date is the murder of the activist Chico Mendes, on 22 December, 1988. An active voice in the struggle to preserve the Amazon, Mendes was frequently threatened by powerful local landowners. Three days before Christmas in 1988, when he was getting ready to take a shower at his home in Xapuri, Acre, he was murdered by Darci Alves, who shot him in the chest. Alves was the son of an influential developer in the region.

The murder of indigenous people has sadly become a devastating trend in Brazil recently. In April, the Pastoral Land Commission released a report revealing that 109 indigenous murders were registered in the country in 2021.

At the same time, the situation for journalists is deteriorating. According to the Brazilian Association of Investigative Journalism (Abraji), from 2019 to May 2022 attacks against press professionals grew by 248%. In 2021, 453 attacks were counted, with Bolsonaro being accountable for 89 verbal insults to journalists.

“The situation is worsening. In 2018, when I was reporting on the elections for governor in Rio Grande do Sul (in Brazil’s south) with two other female journalists from a traditional left-wing paper, some Bolsonaro’s supporters approached us trying to see what we were writing, trying to get my badge to look for me on social media, a very hostile atmosphere,” said Filipe Strazzer, a journalist who at the time was working for the newspaper O Estado de São Paulo, one of the most important in Brazil.

“About environmental issues, I wouldn’t be brave enough to report on that. The Amazon is a lawless land, too many risks involved, powerful people who absolutely control it, so it makes me fearful, and you can’t really develop your work,” he said, remembering the famous case of the missionary Dorothy Stang. Born in the United States and with Brazilian citizenship, she was an environmental activist who was murdered in the Amazon, in the state of Pará, in February 2005. At the time, she was being threatened by rich farmers, landowners and loggers.

In the case of the disappearance of Phillips and Pereira, a search is underway. Around 250 people, mostly military personnel with experience in operations in a jungle environment, are participating in the search. Two aircraft, three drones and 20 vehicles are being used, according to Globo’s website.

But Marubo believes that this effort will not be enough to find them and that more needs to be done. The area is dense, difficult terrain and so they need to go into the lakes, into the forests, and not just stick to the main rivers, he said.

“I have asked the federal police to carry out the investigation in this way and not give up because otherwise these bandits will laugh in our face,” said Marubo.

In an open letter initiated by The Guardian and Washington Post, editors from around the world asked that the search be intensified and that the Brazilian government give more priority to the case.

“We ask that you urgently step up and fully resource the effort to locate Dom and Bruno, and that you provide all possible support to their families and friends,” the letter said.

We support this letter. The entire Index on Censorship team is hoping that Dom Phillips and Bruno Araújo Pereira will be found alive and that more priority will be given to promoting and protecting those defending land, and those reporting on it.