Index and ARTICLE 19 call on Belarusian authorities to quash prison terms and release our former colleague, his wife and others from the BelaPAN news agency

Index on Censorship and ARTICLE 19 are appalled by the prison sentences given to the current and former staff members of BelaPAN, including our former colleague, Andrei Aliaksandrau and his wife, Irina Zlobina. The ongoing clampdown on civic space in Belarus, including a near total restriction on independent media, is an attack on democracy and fundamental human rights. The extent of this attack on free expression is exemplified by this decision.

Andrei and Irina were detained on 12 January 2021 – over 620 days ago – and initially charged with the “organisation and preparation of actions, grossly violating public order, or active participation in them, as well as funding and other material support for such activities.” Subsequently, Andrei and Irina were also charged with “high treason”. On 6 October 2022, the Minsk Regional Court sentenced Andrei to 14 years in prison, with Irina sentenced to 9 years. Also sentenced were two of Andrei’s colleagues, including the current editor-in-chief of BelaPAN, Irina Leushina and the former director, Dzmitry Navazhylau. In addition, Aliaksandrau, Leushina and Navazhylau were sentenced for the “establishment of an extremist formation”. According to Viasna, they are also prohibited from holding certain positions for five years.

Index on Censorship and ARTICLE 19 have always assessed the charges against them to be baseless and politically motivated. Nothing about this sentence changes that fact. In fact, the manner by which this sentencing occurred, with the court closed to the public and only pro-regime journalists present, reinforces this belief. That BelaPAN has been recognised as an ‘extremist formation’, alongside a number of other independent outlets, testifies to the scale of the erosion of free expression and democracy in Belarus.

“We are devastated that our dear friend and former colleague Andrei has been sentenced by the Belarusian regime. Like his wife Irina, his only “crime” has been to steadfastly support fellow citizens defending Belarusian democracy. Yesterday’s verdict is a damning indictment of Lukashenka’s Belarus, and one of most chilling demonstrations to date of his determination to crush freedom of expression. Index will continue to expose the rank criminality of the Lukashenka regime, and to shine a constant light on Andrei, Irina and the countless others like them imprisoned and persecuted for speaking out,” said Ruth Smeeth, CEO of Index on Censorship.

“When I see a rare photo from the courtroom where Irina smiles, probably looking at her family for the first time in two years, and when I see Andrei standing so noble in front of such cruelty  – it all becomes so clear. Pure evil on one side, and – I ask myself – what will be on the other side. It depends on us. The moment we are silent is the moment when Lukashenka wins. So I’m sure that by giving support to political prisoners, by putting them in the spotlight, we win. We help them now and bring the moment of their release closer. All of them are innocent. Each and every person deserves to be released,” said Inna Kavalionak, Director of Politzek.

At the end of September 2021, Andrei wrote a letter to his friend Tania while in pre-trial detention. In it he stated: “Thanks to you, and other good people, my conscience is clear.” The same cannot be said of Lukashenka’s regime and the courts that give cover to his unrelenting attack on democracy. We reiterate our calls for Andrei and Irina, as well as all other political prisoners, to be freed without delay. 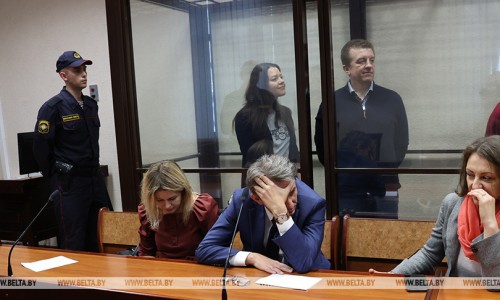