A who, what, why on the dramatic moment China's last leader was removed from the Party Congress 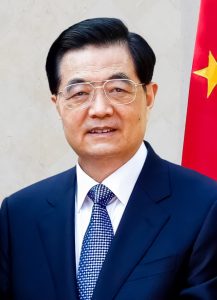 Footage of China’s last leader, Hu Jintao, being removed from Beijing’s Great Hall stage during the twice-a-decade Communist Party Congress on Saturday has drawn global attention. It was a moment of drama in an otherwise tightly choreographed event. Hu, who had been seated at the front next to China’s current leader Xi Jinping, looked visibly confused as he was escorted away by two men. At one stage he tried to speak to Xi and even take some papers that were in front of him, only to be gently but firmly batted away. People quickly asked, what exactly just happened? Here is what we know:

Who exactly is Hu?

The man at the centre of the action, Hu Jintao held the highest office of the Chinese Communist Party between 2003 and 2013. While some aspects of free expression did constrict under his rule, he was largely seen as a moderate force, open to new ideas and the outside world. LGBTQ+ and women’s rights certainly gained ground under Hu. Xi Jinping’s rule has been markedly different, defined by anti-corruption campaigns sniffing out past cronyism and a sweeping attack on the central pillars of civil society.

What did Hu say to Xi?

The key to unlock the mystery. Sadly, no Mandarin-language lipreaders have come to the fore.

Many people were quick to ask whether Hu, 79, was just poorly. It’s also the line that China’s official news agency Xinhua has run with. He had appeared slightly unsteady the Sunday before, during the opening ceremony of the congress, when he was assisted on to the same stage. But the evidence stops here. Beyond looking a bit confused as he walked away (fair enough), he had no visible signs of illness. There were also no paramedics, and no one made any effort to help him. One of the people pictured ushering Hu out is also believed to be Xi’s own bodyguard.

If he wasn’t ill, what happened?

Most people now suspect it was orchestrated by Xi to send a message: any challenge to my rule – real or figurative – will not be tolerated. This is a new era. The old guard, whose influence had still somewhat lingered, are now well and truly out. And no one represented the old guard more than Hu, who incidentally obeyed the two-term limit which Xi has since overturned.

Would Xi be that ruthless?

Yes, he’s purged his party of all but loyalists, presided over the biggest crushing of dissent since Mao Zedong and has orchestrated a genocide against the Uyghur people. He doesn’t play nice.

Can you be certain this was what happened to Hu?

No, and we probably never will fully know. China’s elite party politics have always been defined by opacity and the broader environment is censored to the max. Any mention of the incident has been quickly scrubbed from online and people inside the room won’t talk.

What does this all mean then?

It’s not good. What little freedoms are left in the country look more precarious by the day. As author of The Great U.S.-China Tech War, Gordon G. Chang, commented straight after: “Hardliners are in and reformers are out of the #CCP’s Central Committee. #HuJintao, #XiJinping’s predecessor, was escorted out of the 20th National Congress, apparently against his will. If you’re still in #China, whether you are #Chinese or a foreigner, you should leave, now.” That might sound like hyperbole, but as mentioned above Xi is a ruthless leader.

One response to “What does Hu Jintao’s Great Hall removal mean?”