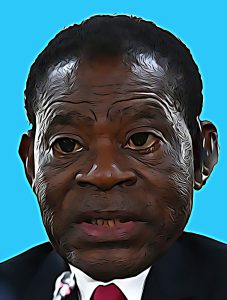 Teodoro Obiang Nguema Mbasogo may not be an obvious choice for our 2022 ‘Tyrant of the Year’, but he certainly wins awards for many aspects of his dictatorial reign. Gaining power before three of his fellow inductees on this list were even born, he’s now entered his sixth decade as the leader of Equatorial Guinea and is currently the longest serving president in the world.

“Anybody looking at Obiang’s 95% share of the recent national elections vote may think he’s an electoral powerhouse. However, with little political opposition and a heavily controlled press, it’s far from a free democratic choice for most,” says Francis Clarke, editorial assistant at Index on Censorship.

While elections are regular, the one held in November 2022 ‘returned’ Obiang to his sixth term in office. While opposition is nominally allowed alongside a multi-party system, he has near total control of the West African nation. Before the 2017 legislative election, it was reported that opposition party supporters were arrested, polling stations closed earlier than advertised and people were limited from reaching distant polling stations.

In September, a human rights campaigner was arrested by police and held for at least 18 days for assisting opposition activists in the country. Anacleto Micha Nlang, co-founder of the banned rights group Guinea is Also Ours, was delivering food to families held under siege in the offices of the outlawed Citizens for Innovation (CI) party. In 2021, an exiled investigative journalist was the subject of threats following the publication of an article alleging corruption at the highest level in his home country.

An oil-rich state, the elite of the country are thought to have plundered the proceeds from this natural resource. In 2017 Obiang’s eldest son, vice-president of the country at the time, was convicted of embezzling millions of dollars from his government and laundering the money through France. He was handed a three-year suspended prison sentence and a $35 million fine.

“With the President’s reign likely to continue, and then passed on to his son, there is currently no sign of a name other than Obiang to be installed as the leader of the nation,” says Clarke.