Polling day procedure may have been in place, but censorship ruined any chance of a free parliamentary election in Europe’s last dictatorship, says Andrei Aliaksandrau 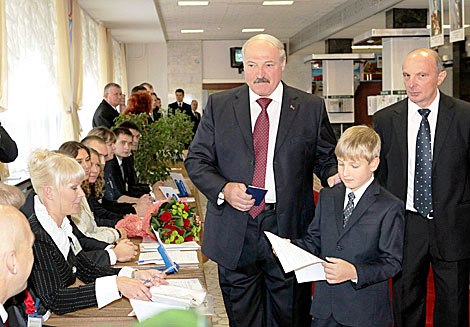 Alexander Lukashenko turns up to cast his vote in Belarus’s parliamentary election, accompanied by his son Nikolay

Last Sunday the people of Belarus learnt the new composition of the lower chamber of its parliament. But you can’t really say that members of the parliament were elected. Most observers say that there are no genuine elections in Belarus, and that the parliament is insignificant because the power of the president is almost complete. A large part of the population shares that view.

The Belarus authorities claim that elections in Belarus are transparent. Journalists joke that they are so transparent that they are almost invisible. Although the Central Election Commission claimed that 72.3 per cent of voters went to the polling stations, independent observers say that turnout was no more than 35-40 per cent. The authorities falsified the turnout to give the elections the veneer of legitimacy.

There are no surprises in the composition of the new parliament. Most of the democratic opposition boycotted the election in different ways. Some parties — European Belarus, the Christian Democrats and the Belarusian Movement — announced from the start that they were not participating in the farce. Others, including the United Civil Party and the Belarus National Front, decided to get candidates registered to give themselves a platform but later withdrew,  denouncing the election as a fraud. Some opposition parties ran candidates all the way through to election day — but predictably without any success.

The lack of unity of approach among the opposition was criticised by civil society groups. “All of the opposition was really in favour of a boycott,” said Uladzimir Matskevich, chair of the coordination committee of the National Civil Society Forum.  “Even those people who called for participating in the campaign until the bitter end did so only in order to use the opportunity for publicity. So why not agree about a common strategy from the very beginning?”

The disunity of the opposition meant that it failed to send a clear message to voters. If ordinary people boycotted the election it had little to do with activities of oppositional groups and a lot to do with a general sense that the National Assembly has no real influence because of the overwhelming power of the president.

“We don’t have public politics in Belarus,” said Zhanna Litivina, chair of the Belarus Association of Journalists (BAJ). “Even when we had election debates on TV, it was obvious the candidates themselves did not really care about them.”

A BAJ analysis of election media coverage shows that the state media, which are dominant in the country, misrepresented the campaign, focusing on the Central Election Commission rather than candidates or their programmes. There were cases of direct censorship as state TV refused to broadcast candidates’ statements. Debates were never live but always pre-recorded. No appeal for a boycott of the elections ever appeared in the state media.

The official explanation from Lidzija Yarmoshyna, the CEC chair, was that airtime was dedicated “to campaigning, not boycotting”. According to the chair of the United Civil Party, Anatol Labiedzka, 32 addresses by the party’s candidates were not broadcast and state-owned papers refused to print 11 of its candidates programmes.

“The purpose of the bleak campaign coverage and the censorship of the candidates’ media appearances was to undermine electoral competition and depoliticise the elections,” the BAJ report (pdf) states.

There were several instances of physical attacks and detentions of journalists. The worst was on 18 September, when seven journalists (Aliaksandr Barazenka, Sergei Grits, Vasil Fiadosenka, Tatsiana Ziankovich, Vasil Padabed, Dzmitry Rudakou and Aliaxey Akulau) who covered a peaceful street performance of opposition in Minsk were seized; Grits, an Associated Press photographer, received a serious facial injury during the attack. This was a clear and gross violation of journalists’ rights, in direct contravention of the law that makes it a criminal offence to interfere with journalistic activities. But few expect that officials will investigate the case and call those responsible for the attack to legal account.

Opposition websites reported that they were temporarily blocked during election day, and foreign journalists were denied visas to cover the elections — among them Swedish reporters Stefan Borg, Erik Von Platen and Gustaf Andersson and German reporters Anne Gelinek and Gesine Dornblüth. [Editors note: Von Platen and Andersson were eventually granted visas after initially being refused]

Many of the formal procedures for democratic elections are in place in Belarus — but genuinely free elections are not simply about formal procedures: they are about discussion of different political programmes. In democracies, free media provide a public platform for debate. In an authoritarian state like Belarus, where media freedom is severely restricted, elections can never be free. The electoral code can be amended, observers can be allowed to see the vote count, the ballot boxes can be transparent – but if there is no freedom of the media, none of this counts for anything.

4 responses to “Belarus’s illusion of democracy”