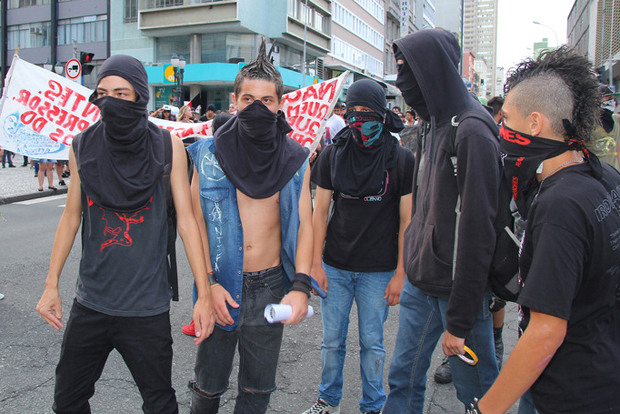 In Curitiba, about 300 protesters took to the streets of the central city asking for more health and safety improvements in the country and against the hosting of the World Cup 2014 in Brazil. Photo: João Frigério / Demotix

In the wake of mass protests sparked by rising transport fares in 2013, Brazil has embraced measures aimed at containing protests. One of the most controversial bans the use of masks during demonstrations.

Approved by the governor of Rio de Janeiro, Sergio Cabral, Act 6.528 stipulates that it is “especially forbidden” to wear masks or other means to prevent identification of protesters. The criminalization of masks was also adopted by the state of Pernambuco and cities across the country without legislative consideration. Act 6.528 also contains a provision that requires telephone companies and internet service providers to respond within 24 hours to police requests for information about masked demonstrators that have been arrested.

The Rio de Janeiro law not only prohibits masks: hoods, scarves or anything that hides the face of demonstrators is likely to draw the attention of security services. Protesters who refuse to remove their mask are taken to a police station to be photographed and fingerprinted for identification.

While violence was limited to small groups during the mass protests that target social inequality, official corruption and the staggering cost of the 2014 Brazil World Cup venues, the Brazilian media has routinely showed photos of masked participants and labelled them as “vandals”, “rioters” and “anarchists”.

Authorities say the mask ban is justified and necessary to protect public and private property from “criminals” and in the name of “public safety”. But some Brazilian lawyers say the ban is a fundamental violation of civil rights and is a dangerous precedent for the country’s democracy.

Specifically, legal specialists say, the prohibition violates Article 5 of Brazil’s federal constitution. In September, the National Human Rights Commission of the Ordem dos Advogados do Brazil challenged the mask ban in court. Another legal challenge has been filed in Rio de Janeiro state as the law “prevents the citizen’s right to free expression”. So far, neither challenge has had any effect.

Human rights organizations claim that the prohibition is an extreme violation of freedom of expression and charge the government with authoritarian motives. Amnesty International has called on the government to respect the right to protest, and halt the arbitrary arrests and criminalization of protester, since the actions are a violation of Brazil’s constitution. Further, Amnesty says, the ban endangers the fundamental principles of a democratic state and are “typical of authoritarian regimes”.

In late January, demonstrations against the World Cup took place in 14 cities – led by hundreds of masked protesters. In Sao Paulo alone, more than a 100 people were arrested. One unmasked protester, Fabrizio Proteus, was shot twice and interrogated by police officers while he was still in intensive care. Activists claim the interrogation and the information he provided was illegal.

For her part, Brazil’s president, Dilma Rousseff, who is worried about elections, is backing an extensive advertising campaign to defend the World Cup. Public spending on the event has topped 8 billion Reais or £2.032 billion. Critics of the government spending have formed a movement under the banner of “Nao Vai Ter Copa”, “No World Cup”, to cause agitation against the games. The president’s advisors say new mass protests may have a negative impact on her re-election plans. In 2013, Rousseff’s popularity ratings fell over 20 per cent during the protests.

In the meantime, the Federal Police and the Agência Brasileira de Inteligência (Brazilian Intelligence Agency – Abin) are scanning the internet, especially on social networks, in search of “agitators” and suspects.

Everything indicates that repression has just begun.

This article was originally published on 5 February 2014 at indexoncensorship.org

One response to “Brazil moves to unmask protesters”