A Goa man posted in a popular Facebook group that if Narendra Modi became India's prime minister, a holocaust "as it happened in Gujarat", would follow 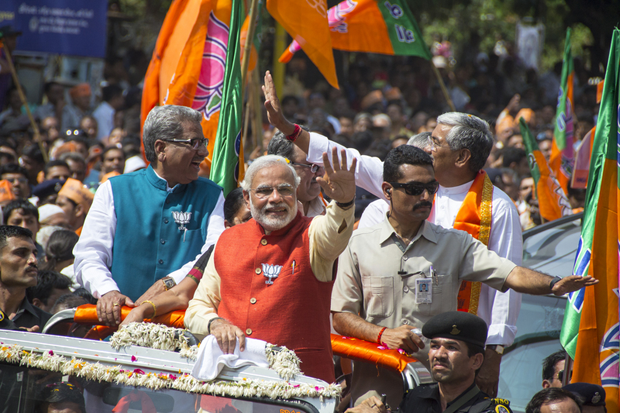 An Indian man has found himself in trouble for allegedly posting a Facebook comments against Indian Prime Minister Narendra Modi. The incident raises serious doubts over online freedom in the world’s biggest democracy

On March 23, shipbuilding professional Devu Chodankar posted in the popular Facebook group Goa+, that if Modi became prime minister, a holocaust “as it happened in Gujarat”, would follow. Modi was the Gujarat chief minister during the 2002 pogrom in which more than 1000 people — most of them Muslims — were killed in communal violence. Chodankar also wrote that it would lead to the Christian community in the state of Goa losing their identity. He later deleted the post. In another Facebook group he regretted his choice of words but stood by the substance of his argument, calling it his crusade against the “tyranny of fascists”.

The incident was reported to the police in March by former chairman of the Confederation of Indian Industries in Goa Atul Pai Kane, who was close to Modi’s party Bharatiya Janata Party (BJP). He filed a First Information Report (FIR) to the police, under sections 153(A), 295(A) of the Indian Penal Code (IPC) and section 125 of the People’s Representation Act and 66-A of the Information Technology Act. Under the former, it is a crime to promote enmity between different groups on grounds of religion, race, place of birth, residence, language, etc., as do acts prejudicial to maintenance of harmony. Meanwhile, the latter makes it a punishable offence to send messages that are offensive, false or created for the purpose of causing annoyance or inconvenience.

In his complaint, Kane said that Chodankar had threatened the group members not to vote in favour of the BJP, as it would virtually make Narendra Modi the prime minister of India. “I made this complaint as Chodankar issued inflammatory statements and tried to create communal hatred. He even refused to withdraw those comments. You cannot make such comments on a public forum. There has to be a limit.”

Police summoned Chodankar for the first time on May 12, and a trial court on 22 May rejected anticipatory bail. Chodankar has left Goa to evade possible arrest. Police want to interrogate him to find out whether he had any broader intentions with his comments, and whether he had plans to “promote communal and social disharmony”.

Social activists and opposition political parties feel that lodging a police complaint over a Facebook comment is an attempt to curb individual freedom, and that such cases would become the order of the day under Hindu nationalist BJP rule. Activists also believe that this type of police action is tantamount to curbing freedom of expression, ultimately meaning that you should either stay away from social media or stop speaking your mind on such platforms.

Amitabh Pandey, a media freedom activist, said: “The message is very clear. You should know how to behave in the cyber world. If you dare to write against Narendra Modi on any social media platform then you should be ready to face the consequences.”

Indian Institute of Technology (IIT) alumnus Dr. Samir Kelekar has been actively working for the case against Chodankar to be dropped. “I feel arresting a person for making a comment against someone is too much. We don’t agree with his comments but we don’t agree with police action either. His comment is not going to affect the society in any way,” he said.

This isn’t the only such case in recent times in India. On 15 May, author Amaresh Mishra was arrested in Gurgaon, in the northern Indian state of Haryana, for posting content on Facebook and Twitter against Modi and Rashtriya Swayamsevak Sangh (RSS), a radical Hindu organisation associated with BJP. Charges alleged he had incited violence against Modi.

Along with social activists, many netizens are opposing the police action against Chodankar. “In a way we are living in a country which claims that we have freedom of expression, but in reality it doesn’t exist,” said Facebook user Animesh Upadhyay, adding that people don’t know which comment will be treated as an offence and might get them arrested.

However, some feel that there has to be a limit. Ashutosh Jaiswal, convener of hardliner Hindu organisation Bajrang Dal said: “The police should deal sternly with such public comments.”

Goa Chief Minister Manohar Parrikar has refused to interfere in the case. In a written statement he said: “As per Supreme Court directives, it is compulsory to register all complaints. A prominent citizen has filed a complaint and judiciary has refused to grant anticipatory bail to the accused person, which proves that there is substance in the complaint.”

He has also stated that there was “no intention” to arrest Chodankar. “He was issued two summons after which he did not appear before police, and his lawyer went for anticipatory bail…Police opposed the bail as a regular process.”