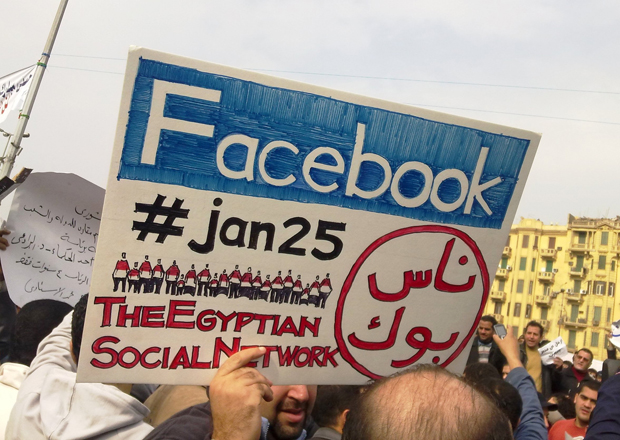 A few months after the adoption of a progressive new constitution guaranteeing freedom of expression and the right to privacy, reported plans by Egyptian authorities for indiscriminate mass surveillance of social media in Egypt have alarmed rights advocates and many within the country’s internet community.

The proposed surveillance plan has also sparked fears that internet activists may be the next targets of the military-backed government’s widening crackdown on dissent.

Defending his ministry’s decision to introduce the new mass monitoring system, Egypt’s Minister of Interior Mohamed Ibrahim was quoted by the semi-official Al Ahram newspaper on Monday as saying that the proposed system was “necessary to combat terrorism and protect national security”. He added it would be “similar to that used in the US or the UK to protect their national security”.

Seeking to allay concerns that the new system would curtail freedom of expression, Ibrahim said: “We do not seek to interfere with citizens’ privacy. The system will merely help us track and identify potential terrorist and criminal threats.”

Ibrahim’s statements came a day after the privately-owned Al Watan newspaper published a leaked call by the ministry of interior for tenders from companies to establish a sophisticated mass surveillance system.

In a statement criticising the proposed mass surveillance plan, Amnesty International said the monitoring of social media “would deal a devastating blow to the rights to privacy and freedom of expression in the country”, adding that “the new surveillance system risks becoming yet another instrument in the Egyptian government’s toolbox of state repression”. Amnesty also urged the Egyptian authorities not to replicate illegal programmes that have been used by other countries to violate the right to privacy. “Any surveillance programmes must comply with the general principles under international law of legality and judicial accountability,” the statement said.

Meanwhile, Egyptian rights groups and internet activists have expressed fears the proposed system would “close down the last remaining space for free expression in Egypt”.

Since the ouster of Islamist president Mohamed Morsi by military-backed protests last summer, the interim authorities have taken measures to tighten the state’s grip on the media. Days after the military takeover of the country, several Islamist-linked media outlets were shut down by the interim government. Security forces ransacked the offices of a Muslim Brotherhood TV channel and the Al Jazeera Mubasher Channel (accused by Egyptians of being pro-Muslim Brotherhood), confiscating their equipment and arresting their journalists.There has since been a marked shift in the tone of both state and state-influenced news media with many journalists now towing the government line either for fear of persecution or of being labelled “unpatriotic.” Several journalists have complained of “harassment” and intimidation” by security agencies. In today’s deeply polarised Egypt, reports of verbal and physical attacks by “patriotic” mobs on journalists trying to cover the conflict, are all too common.

Journalists covering “anti coup” protests have been deliberately targeted by security forces with no fewer than five being shot and killed while covering the unrest. Mayada Ashraf who worked for the privately-owned El Dostour newspaper became the latest journalist-victim of the violence when she was shot in the head in March while covering clashes between security forces and supporters of the ousted Morsi. Meanwhile, 65 journalists have been detained since the military takeover of the country nearly a year ago. There are 17 journalists currently behind bars in Egypt, according to a recent report released by the Committee for the Protection of Journalists. Three Al Jazeera English journalists have been in prison for six months, charged with “aiding a terror group and spreading false news that harms national security.” Despite pleading “not guilty”, their repeated requests to be released on bail have thus far been denied by the prosecutors in the case. A fourth Al Jazeera journalist has been in jail since August 2013 and has to date, not been charged.

Besides detecting any references to terrorism on social media, the controversial new system will also scan social networks for “calls for illegal protests and sit-ins, incitement to violence and defamation of religion,” Abdel Fattah Othman, a spokesman for the ministry of interior said in an interview broadcast Sunday on Al Mehwar Channel. In the absence of a “watch list” determining the topics the ministry intends to censor, many internet users are worried, fearing their electronic communications may be targeted.

Responses by Egyptian internet activists to the ministry’s surveillance plan have teetered between anger and sarcasm. Some Twitter users chose to take the matter lightly, mocking the decision in their tweets. #Wearebeingwatched — created by Twitter activists a week ago in response to the proposed plan — has fast become one of the top trending hashtags in Egypt with more than 50,000 uses within the span of a single week.

“State security agents when are you coming to get me?” Mahmoud El Zanaty a Twitter user jokingly asked, using the hashtag.”You never keep your appointments.”

“I’m free, that is why I’m being watched,” was another sarcastic message posted, by a user going by the twitter handle Doaa. Meanwhile, in a message addressed to the “agent” supposedly watching him, another twitter user wrote: “Farrag, come join me for tea!”

While most rights activists fear the proposed surveillance system may be used as a tool of repression, a few rights advocates have dismissed it as “mere government propaganda”.

“State security agencies have always kept a close watch on social media networks in Egypt,” Rights Lawyer Gamal Eid told Index. He cautioned however, that the ministry’s announcement was meant “to intimidate online activists and silence voices of dissent”.

Over the course of the past three years, several activists have been arrested and prosecuted for the content they have posted on social media networks. Blogger Maikel Nabil was arrested in March, 2011 and later sentenced to 3 years in prison for a Facebook post allegedly insulting the military. He had written: “The army and the people were never one hand.” He spent ten months behind bars before being released. In September 2012, Alber Saber, a Computer Science student and blogger was also arrested on allegations of having shared the YouTube trailer of the anti-Islam film “Innocence of Muslims” on his Facebook page. While police found no evidence that he had uploaded the video deemed insulting to Islam, he was nevertheless sentenced to 3 years in prison for “defaming Islam and Christianity” and allegedly “spreading atheism”. Saber was released for an appeal session a year later and subsequently fled the country. Earlier this year, Amr Hamzawy, a prominent liberal intellectual and political scientist was charged with “insulting the judiciary” for a Twitter post criticising a court ruling against three US pro-democracy civil society organisations .

Ahead of the January 2011 uprising, young pro-democracy activists had used social media networks to mobilise and organise the mass protests that brought down autocratic president Hosni Mubarak. Videos depicting police brutality and others urging Egyptians to rise against the corrupt Mubarak regime posted by the April 6 pro-democracy youth movement and “We Are All Khaled Said” — a Facebook page created by Google Executive Wael Ghoneim to bring attention to the brutal murder of a young Alexandrian (allegedly beaten to death by two police officers) — were the initial spark igniting the 2011 uprising, prompting some analysts to describe the revolt of 3 years ago, as a “Facebook Revolution”. Recognising the role of social media in the mass uprising, Mubarak cut off the internet and mobile phone lines in an attempt to quell the protests, a few days after their eruption. His rash response however, triggered public furore and only served to further strengthen the resolve of the Tahrir protesters.

With internet penetration in Egypt at 43 per cent (at the end of last year) — relatively low compared to other countries where illiteracy rates are lower than in Egypt — the Egyptian government is nevertheless wary of social media, having witnessed first-hand the role of Facebook and Twitter in toppling the authoritarian regimes in the region. Despite provisions in the recently-adopted constitution protecting the right to privacy and guaranteeing the confidentiality of electronic correspondence, telephone calls and other means of communication, the military-backed authorities are taking no chances. Systematic monitoring of Facebook, Twitter, You Tube and possibly mobile phone applications such as WhatsApp, Viber and Instagram would enable the government to identify dissenters and possibly, crackdown even harder on them, critics fear.

In the past year, the interim government has shown little respect for freedoms and rule of law. With military strongman Abdel Fattah El Sisi now sworn in as the country’s new president and in the wake of the proposed mass surveillance plan, skeptics warn that things are likely to get even worse as a counter-revolutionary bid seeking to obliterate all traces of the 2011 Revolution that called for bread, freedom and social justice, gains ground in Egypt.

This article was published on June 10, 2014 at indexoncensorship.org