NEWS
Padraig Reidy: Why use the "offended" line? Because it works 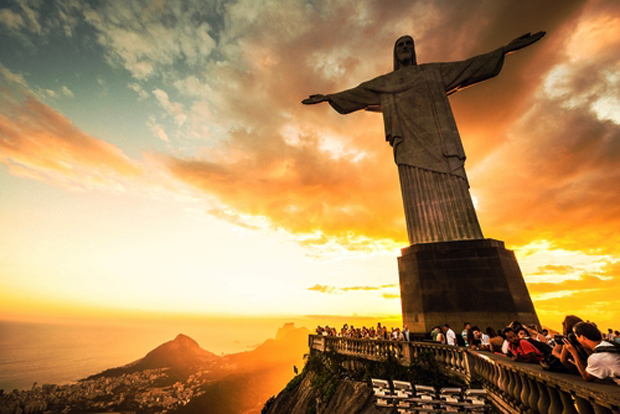 World Cup time! Hurray! An entire month of football! Rejoice as the pubs stay open late for weirdly timed matches! Gasp at your workmates’ expertise on Iran’s deployment of a false 9! Repeatedly smash yourself in the face with your iPad as you read yet another article by a broadsheet columnist complaining that people don’t pay as much attention to literary fiction as they do to sport!

While the competition officially kicks off tonight, the Brazilians, or, specifically, the archdiocese of Rio have dived in with an early tackle, reportedly threatening to sue Italian broadcaster RAI for an advert showing Rio’s famous Christ The Redeemer statue wearing the Jersey of Italy’s Azzurri.

Suing for what, exactly, is not clear. The church’s lawyer, Rodrigo Grazioli, has been quoted as saying “The Archdiocese is deeply offended. It’s as if Brazilian TV were to make a commercial in which mulatto girls engaged in lewd behaviour with the gladiators of the Colosseum.”

Leaving aside the bizarrely specific and racist mention of “mulatto girls”, and the fact that people involved with churches have to make absolutely everything, ever, about “lewd behaviour”, it’s still not clear what the exact complaint is. Is it the suggestion that the colossal statue might support Italy? That Jesus himself might support Italy? Is this about putting any jersey at all on Jesus, or specifically an Italian one? Is there something specifically blasphemous about suggesting that the Son of God is a catenaccio man?

Or is it something rather more prosaic, such as, say, the church claiming to hold copyright over the image of the statue?

If it is that, as the original O Globo newspaper report suggests, then Grazioli and his clients are being more than a little disingenuous in their outrage. If the issue is simply an objection to commercial usage of the image, than that’s what the complaint should be about.

So why the offended line? Why the suggestion of an insult to religion? Because, put simply, it works. Who wants to be offensive?

In Ireland this week, national broadcaster RTE refused to show a sketch as part of the Savage Eye sketch show. The sketch, now leaked on the web features a group of “wild nuns” ogling a muscular Jesus, in a spoof of Diet Coke ads of old. Comic David McSavage, the man responsible for the skit, has said the broadcaster is afraid of Ireland’s blasphemy laws; RTE says its own guidelines will not allow for “undue offence”.

I’m not even sure that, even if one was a supporter of laws against blasphemy, images of hunky Jesus, or Azzurri Jesus would necessarily count as blasphemous, at least not for Catholics.

On a panel on religious art a few years ago, I found myself simultaneously playing the role of token secularist and token Roman Catholic. The other panelists – art critics and Anglicans – were quite keen on abstraction in religious art. I found myself defending the more visceral, more Roman depictions of Jesus and God on the basis that the entire point of Jesus was his manifestation as human.

To ascribe certain human possibilities to him, such as lust, or even supporting a particular sports team, should not be considered transgressive; indeed I recall, in my youth, our parish priest would often offer up prayers for the local Gaelic football club, suggesting at least the possibility of partisanship. And the very fact that nuns are “brides of Christ” is suggestive of, well…

Catholicism doesn’t really have a problem with idolatry either. Catholics complaining about depictions of Christ do not have the same theological basis as Orthodox Sunni Muslims, who at least can point to some rules on portrayals (which is not to suggest that everyone should follow those rules). Catholics, with our brightly painted statues, sacred medals and all the rest, don’t really have a leg to stand on this one.

These squeals of “offence” are really demands for “respect”, in the Corleone sense. And since the Danish Muhammad cartoons, religions have been in a respect-based arms war. Every time you hear a conservative Christian moan that this or that comic or writer “wouldn’t say that about the Muslims”, remember, they are not praising their own faith’s humility, but condemning its timidity. The archdiocese of Rio is playing a version of this game with its claim to be offended by a Photoshopped football jersey. There’s no reason we should play along.

One response to “Padraig Reidy: Why use the “offended” line? Because it works”