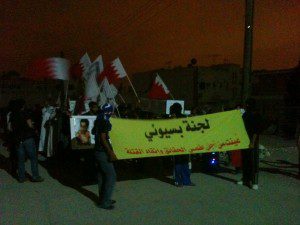 A mission report by six international organisation who travelled to Bahrain last November accuses the Bahraini authorities of failing to deliver on promises of reform, despite a highly-touted commission of inquiry. Bahrain has now experienced almost a year of turmoil, as the anniversary of unrest, 14 February, draws near. Despite promises of change, rights violations continue on a daily basis, and individuals jailed during the government crackdown in February and March remain in prison.

The report, Justice Denied in Bahrain: Freedom of Expression and Assembly Curtailed, outlines human rights violations linked to the authorities’ handling of protests and demonstrations in the country since February 2011. The report details meetings with human rights defenders, lawyers, writers, artists, journalists, government officials and foreign diplomats and provides insight into how the government continues to punish and prosecute individuals for expressing their opinions and protesting ongoing repression.

Bahrain’s government appears to be more concerned with maintaining the façade of a modern Arab nation, rather than listening to the demands of a popular uprising. Citizens have been prosecuted for expressing their views peacefully. Bahraini officials have crushed free speech.
Sara Yasin, editorial assistant at Index on Censorship

Expectations of change in Bahrain were raised by the publication of the Bahrain Independent Commission of Inquiry (BICI) report at the end of November (witnessed by the mission) and its recommendations for reform. However the reality on the ground remains unchanged. Human rights activists, doctors, teachers, union members, political figures, journalists, bloggers and others continue to face harassment, prosecution and imprisonment despite the use of torture and unfair trials against them. Protests continue on an almost daily basis, and the security forces response is virtually unchanged despite the recommendations made in the BICI report.

It seems that despite the BICI report’s extensive catalogue of abuses against Bahraini citizens including torture, and a clear condemnation of the culture of impunity, the government of Bahrain is intent on maintaining the status quo. We are not seeing the immediate release of prisoners. Instead there is an interminable succession of postponed trials.
Marian Botsford Fraser, chair of the Writers in Prison Committee, PEN International

The 11 recommendations made in the report, include calls to end the harassment, imprisonment and prosecution of Bahraini citizens for what essentially amount to persecution of free expression and legitimate human rights work. In line with the BICI report, which was accepted by the government of Bahrain, the international mission report also insists on accountability for those responsible for violating international human rights norms, in particular those responsible for torture and killing.

The full international mission report is online here, it will be launched today (24 January) at 17:30-19:00, Free Word Centre, London