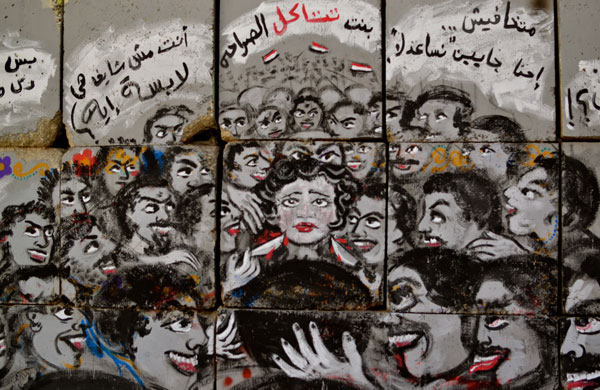 Circle of Hell was painted to raise awareness of sexual harassment and assault in Egypt. Photo: Melody Patry / Index on Censorship

Since the fall of President Hosni Mubarak two years ago, artists have been active in breaking Egypt’s age-old taboos around sexual violence, especially since sexual harassment has been on the rise. In the period after the revolution, artists — including women — have covered the country’s walls with murals and slogans, using them to amplify calls for change. Melody Patry reports.

Merna Thomas, co-founder of the campaign Graffiti Harimi explains that graffiti has become one of the most popular forms of activism, and Graffiti Harimi uses the art form to give women “a voice” in Cairo’s public spaces. The project involves spray painting images of powerful female Egyptian voices alongside inspirational quotes. “Women didn’t have a voice”, says Thomas, “my hope is to open a debate within society, to start a dialogue, even unconsciously, with people who pass by our graffiti every day.”

In February, two Egyptian artists — Mira Shihadeh and Zeft — painted “the circle of hell” on a wall near Tahrir Square. The image denounced a disturbing trend of violent gang rapes against female protesters —- where women are encircled in mobs of 200 to 300 men who fight, pull, shove, beat and strip them. The surge in more violent and organised sexual assaults has led to some local groups to allege that sexual harassment is being used as a tool to scare female protesters away from participating in demonstrations.

“They try to intimidate us!” says Rana el Husseiny, an Egyptian comedian and painter, “by creating this atmosphere of fear they hope women will refrain from going to protests.”

The artist explains to Index why “it is no longer possible to turn a blind eye to what’s happening in the country”.

“Mob attacks also result from years of denial, victim-blaming and self-censorship. A few years ago, if you had been a victim of harassment and wanted to press charges, the police wouldn’t even register your complaint. But the fact is that even now, most girls don’t want to file a complaint. They think that talking about sexual harassment is shameful. I believe that art — whatever its form — can challenge this perception.”

Conquering the culture of self-censorship around sexual harassment has been a battle for artists and activists like el Husseiny. She participated in a drama workshop on sexual harassment last November and December — which had more male participants than female ones. The workshop led to a 30-minute play entitled Maknoun (literally “what is hidden” in Arabic). In her scene, el Husseiny plays a woman who claims that sexual harassment doesn’t exist, while a man is obviously harassing her in the background.

“This scene shows how difficult it is to address sexual harassment”, explains el Husseiny,  “not only is there no political will to do so, but our society is hypocritical”. But el Husseiny believes she has a responsibility vis-à-vis this issue: “As an artist, I want to talk about sexual harassment; showing it on stage is my way to break this taboo. But unfortunately, our audience is limited. To maximise our impact, we should perform in schools, in the streets…”

Naous, who choreographed and co-directed the project, says everyone practises conscious or unconscious censorship.

“It was very interesting to see that in some areas, dancers allowed themselves to try some moves, while in other parts of the city, they felt really tense. They had in mind that people might react in an aggressive way so they censored themselves.”

Cairography uses its artistic performances to battle sexual harassment “in a more direct way” — creating a public debate through street performances, and screenings of performances in public spaces. Naous says that the key to change is facing “the problem of pressure, censorship, and self-censorship, because I find self-censorship to be one of the most dangerous things in society”. 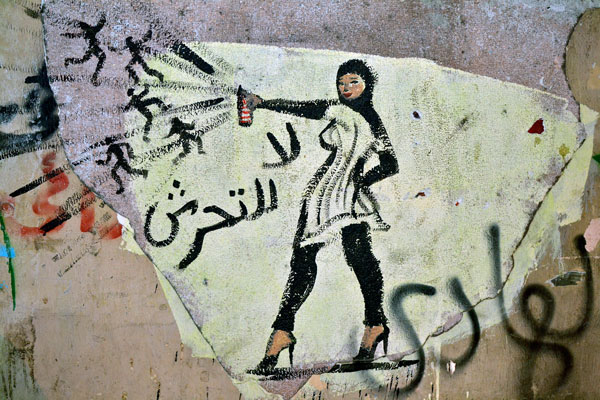 Nadine Emile, one Cairography’s dancers, says that such artistic initiatives have already begun to foster change.

“What you could not do two or three years ago, you can do now” says Emile, citing the example of the 2010 Bussy Monologues, a play she participated in telling the stories of real women through monologues, which was censored after audience members filed complaints following the first performance. The directors of the play Mona el Shimi and Sondos Shabayek, told Ahram Online, “We had a visit from the morality police, the tourism police, State Security and the censorship body, who made us take more scenes out”

Emile’s two scenes were cut from the show. In one of the cut scenes, she tells the story of a woman who had been abused by a cousin as a teenager.  “When they told me my monologue had been removed, I felt very angry. I even cried backstage”, Emile recounts, “I thought, ‘why should we take the story off?’ People need to know”.

So when she was asked to perform in the streets with Cairography, Emile feared backlash. “The first time we hit the streets, I was a bit concerned. I didn’t know how people would react”, she said. “I thought that I would be really tense and paranoid, or that I would censor myself, but it was just the opposite.” Emile says that most passersby did not notice that she was performing, and through the experience she was able to feel safe outside.

All the artists interviewed highlighted art’s ability to prompt discussions within Egyptian society. However, they also acknowledged the need to combine cultural and political initiatives to effectively battle sexual harassment.

“I would say that these artistic projects I was involved in triggered some glimmer of hope”, concludes Emile, “but the ‘fight’ has just started and much remains to be done.”

One response to “Egyptian artists declare war on sexual harassment”