Two journalists were attacked while covering a street rally in Kiev, and nine more Ukrainian reporters were in danger of losing government accreditation following a protest to support their colleagues, Andrei Alaiksandrau reports.

TV journalist Olga Snitsarchuk and her husband, Kommersant photographer Vladislav Sodel were beaten on 18 May in the centre of Kiev, while they were taking pictures of a political rally in the Ukrainian capital. The journalists began recording images of a group of young men who were attacking people at the gathering. 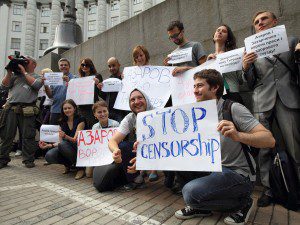 “Having seeing that I started taking photos, young men in tracksuits rushed at me. And Olga began to take video of how they were beating me, so the men knocked her to the ground and began to beat”, Vladislav Sodel told Ukrainskaya Pravda.

Police officers who were present at the scene ignored appeals for help from rally participants and the journalists, according to witnesses. One of the attackers was later identified as Vadim Titushko, who happens to be a member of a police sports club. Titushko was detained and interrogated, but on 22 May released on bail.

Ukrainian journalists demanded the incident be properly investigated. On 22 May nine reporters conducted a silent action during a government meeting by turning  their backs on ministers to show posters that read “Today it is a journalist, tomorrow it is going to be your wife, sister or daughter. Take action!”

Prime Minister Mykola Azarov ordered the journalists removed from the hall and, later, withdrew their press credentials for “breach of order of coverage of Cabinet of Ministers’ work.” This incident prompted about 100 Ukrainian journalists to protest outside the prime minister’s office in support of Snitsarchuk, Sodel and their nine colleagues. The government announced that the journalists would keep their accreditation. Moreover, Verkhovna Rada, a member of Ukraine’s parliament, today created an ad-hoc committee to investigate the 18 May incident.

“We are at the beginning of a new war between the state and the press,” a Ukraininan MP and a former journalist Volodymyr Ariev said yesterday in London during a conference on media regulation, organised by Parliamentary Assembly of the Council of Europe.

The Institute of Mass Information, a Ukrainian media freedom non-governmental organisation, has reported on the deterioration of the media environment in the country.

“There was a huge increase in the number of physical attacks on journalists in 2012, with 80 cases registered in comparison to just 26 in 2011. We also note an increase of instances of censorship. This year is going to be tough for journalists and free speech in Ukraine as the authorities will definitely aim at building the basis for 2015 presidential elections,” Oksana Romaniuk, a representative of Reporters Without Borders in Ukraine, told Index.