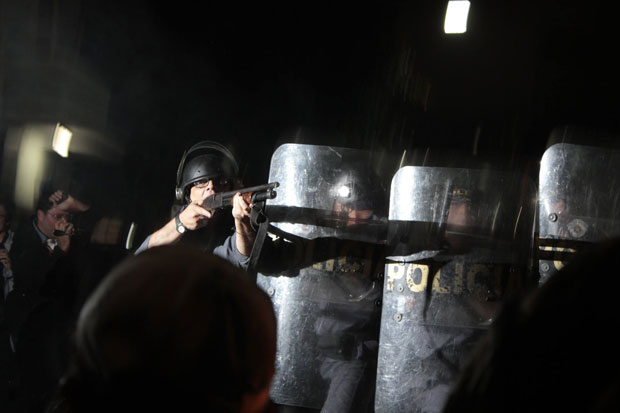 Sparked by a series of transport fare hikes and official corruption, the ongoing mass protests in Brazil’s cities have been greeted by crackdowns by police. Rafael Spuldar reports on the journalists caught in the crossfire

While large protests are not common events in Brazil, some of the protesters say “the giant has awoken”, meaning that Brazil’s population of 190 million is mobilising to fight corruption and political misconduct.

As many as 15 journalists were injured by police and two were taken into custody during last Thursday’s demonstrations in São Paulo, according to Brazil’s Association of Investigative Journalism (Associação Brasileira de Jornalismo Investigativo, Abraji). The journalists were allegedly beaten, maced or hit by non-lethal rubber bullets covering the protests.

Photographer Sérgio Andrade da Silva from Futura Press agency was hit in the eye by a rubber bullet. Doctors say his chances of full recovery are less than 5 in a hundred.

Reporter Giuliana Valloni from Folha de S.Paulo, Brazil’s biggest daily newspaper, was also hit in the eye by a rubber bullet. She says a policeman shot at her from a 20-meters.

“I wasn’t attacking anyone, I wasn’t cursing at anyone. I was doing my job”, Giuliana told Folha from her hospital bed.

“I saw him aiming at me, but I never thought he would fire, because I had (policemen) aiming at me before that night. You’ll never think that an armed guy in uniform will ever shoot you in the face”, she said.

Folha says that seven of its staff members – including Giuliana – were attacked by policemen at  Thursday’s protests.

The harshest clashes between policemen and protesters occurred on Consolação Avenue, in downtown São Paulo. The crowd attempted to march up Consolação to reach Paulista Avenue – the financial center — but riot police blocked their way. More than 200 people were taken into custody.

Videos posted on social media and on YouTube allegedly show police abuse against demonstrators. Some people were targeted with tear gas in their own homes while recording videos of the protests. Other videos show protesters being shot even while they chanted sem violência, sem violência (“no violence, no violence”).

“The Union’s Public Ministry cannot be neither passive nor irresponsive before the soulless violence committed in São Paulo’s capital by the State’s security forces, which repeats without originality the repressive practices of the dictatorial regime”, said ABI in its statement, linking the recent events to the repression seen during Brazil’s military rule (1964-1985).

Abraji’s executive director Guilherme Alpendre says acts of violence against journalists during demonstrations are not a common thing, and he believes negative feedback will probably ease down police action and prevent new cases like the ones seen in São Paulo last Thursday.

However, Alpendre points out the fact that attacks by state agents against journalists have increased in the past three years. He cites reporters Mauri König and Rodrigo Neto as examples of that trend: the former wrote about police misconduct in the state of Paraná and had to move to Peru after receiving death threats, while the latter was shot down after denouncing involvement of police members with crime gangs in the state of Minas Gerais.

“I’m not saying all these cases are connected, or that the same method was employed in them, but what we see now is more violence perpetrated by the state against journalists. Those were media professionals identified as such, and they were attacked anyway”, Alpendre told Index on Censorship.

The demonstrations are taking place in many cities — São Paulo, Rio, Brasília, Belo Horizonte, Curitiba, Goiânia and Natal. It started as a national movement against the increase in bus fares, but now its members – mostly young people from leftist parties and students’ organizations – claim their demands are broader.

Protests could be seen during the weekend in federal capital Brasília, Belo Horizonte and Rio de Janeiro, coinciding with the start of the Confederations Cup, a warm-up event to next year’s World Cup, to be hosted in Brazil. Protesters demanded less money be spent on building stadiums and more be applied to education and other social works.

While protests in Belo Horizonte were peaceful, riot police used tear gas and stun grenades against the crowds in Rio and Brasília, where 29 people were arrested.

More demonstrations are scheduled for today. Protests are also being organised in 27 cities around the world in solidarity.

Some scholars have linked demonstrations in Brazil to those seen in Turkey, where mostly young, web-connected people have taken the streets – first to protest against the building of a shopping mall on a park, but later to fight the government.

Spanish sociologist Manuel Castells – one of the world’s most prominent cyberculture theorists – said last week that the demonstrations all over the world found a new way to gather and claim “the city back to the citizens”.

“Before, if people were discontented, the only thing they could do was to go to a mass demonstration organized by parties and unions, which would soon start to negotiate in the name of people. But now the capacity to self-organize is spontaneous. This is new, and this is social networking”, said Castells.