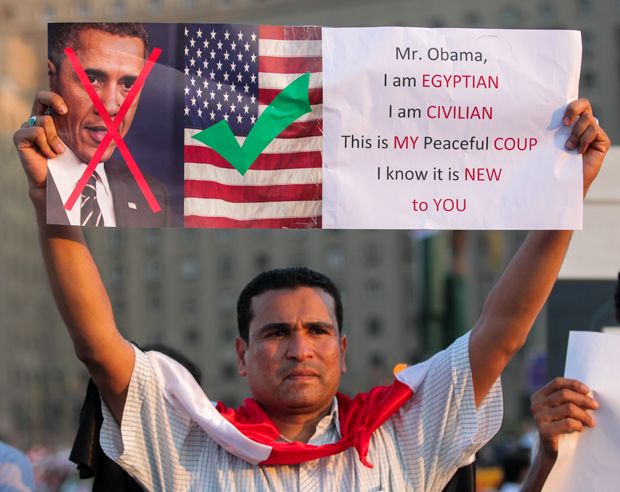 An Egyptian protestor holds a sign showing the anger of some Egyptian people towards the American government. (Photo: Amr Abdel-Hadi / Demotix)

Index on Censorship condemns today’s attacks on protest camps in Cairo and other cities and calls on Egyptian authorities to respect the right to peaceful protest. Live coverage Al Jazeera | BBC | The Guardian

Xenophobia in general and anti-US sentiment, in particular, have peaked in Egypt since the June 30 rebellion that toppled Islamist President Mohamed Morsi and the Egyptian media has, in recent weeks, been fuelling both.

Some Egyptian newspapers and television news has been awash with harsh criticism of the US administration perceived by the pro-military, anti-Morsi camp as aligning itself with the Muslim Brotherhood. The media has also contributed to the increased suspicion and distrust of foreigners, intermittently accusing them of “meddling in Egypt’s internal affairs” and “sowing seeds of dissent to cause further unrest”.

A front page headline in bold red print in the semi-official Al Akhbar newspaper on Friday 8 Aug proclaimed that “Egypt rejects the advice of the American Satan.” The paper quoted “judicial sources” as saying there was evidence that the US embassy had committed “crimes” during the January 2011 uprising, including positioning snipers on rooftops to kill opposition protesters in Tahrir Square.

The stream of anti-US rhetoric in both the Egyptian state and privately-owned media has come in parallel with criticism of US policies toward Egypt by the country’s de facto ruler, Defense Minister Abdel Fattah el Sissi, who in a rare interview last week, told the Washington Post that the “US administration had turned its back on Egyptians, ignoring the will of the people of Egypt.” He added that “Egyptians would not forget this.”

Demonizing the US is not a new trend in Egypt. In fact, anti-Americanism is common in the country where the government has often diverted attention away from its own failures by pointing the finger of blame at the United States. The public has meanwhile, been eager to play along, frustrated by what is often perceived as “a clear US bias towards Israel”.

In Cairo’s Tahrir Square, anti-American banners reflect the increased hostility toward the US harboured by opponents of the ousted president and pro-Morsi protesters alike, with each camp accusing the US of supporting their rivals. One banner depicts a bearded Obama and suggests that “the US President supports terrorism” while another depicts US ambassador to Egypt Anne Patterson with a blood red X mark across her face.

The expected nomination of US Ambassador Robert Ford — a former ambassador to Syria who publicly backed the Syrian opposition that is waging war to bring down the regime of Bashar El Assad — to replace Patterson, has infuriated Egyptian revolutionaries, many of whom have vented their anger on social media networks Facebook and Twitter. In a fierce online campaign against him by the activists, Ford has been criticized as the “new sponsor of terror” with critics warning he may be “targeted” if he took up the post. Ambassador Ford who has been shunned by the embattled Syrian regime, has also been targeted by mainstream Egyptian media with state-owned Al Ahram describing him as “a man of blood” for allegedly “running death squads in Iraq” and “an engineer of destruction in Syria, Iraq and Morocco.” The independent El Watan newspaper has also warned that Ambassador Ford would “finally execute in Egypt what all the invasions had failed to do throughout history.”

The vicious media campaign against Ford followed critical remarks by a military spokesman opposing his possible nomination. “You cannot bring someone who has a history in a troubled region and make him ambassador, expecting people to be happy with it”, the spokesman had earlier said.
Rights activist and publisher Hisham Qassem told the Wall Street Journal last week that “Egyptian media often adopts the state line to avoid falling out of favour with the regime.”

Statements by US Senator John McCain who visited Egypt last week to help iron out differences between the ousted Muslim Brotherhood and the military, have further fuelled the rising tensions between Egypt and the US. McCain suggested that the June 30 uprising was a “military coup”, sparking a fresh wave of condemnation of US policy in the Egyptian press.

“If it walks like a duck, quacks like a duck, then it’s a duck,” Senator John McCain had said at a press briefing in Cairo. He further warned that Egypt was “on the brink of all-out bloodshed.” The remarks earned him the wrath of opponents of the toppled president who protested that his statements were “out of line” and “unacceptable.” The Egyptian press meanwhile has accused him of siding with the Muslim Brotherhood and of allegedly employing members of the Islamist group in his office.

The anti-Americanism in Egypt is part of wider anti-foreign sentiment that has increased since the January 2011 uprising and for which the media is largely responsible. Much like in the days of the 2011 uprising that toppled Hosni Mubarak, the country’s new military rulers are accusing “foreign hands” of meddling in the country’s internal affairs, blaming them for the country’s economic crisis and sectarian unrest. The US has also been lambasted for funding pro-reform activists and civil society organizations working in the field of human rights and democracy.

Ahead of a recent protest rally called for by Defense Minister Abdel Fattah El Sissi to give him “a mandate to counter terrorism”, the government warned it would deal with foreign reporters covering the protests as spies. As a result of the increased anti-foreign rhetoric in the media, a number of tourists and foreign journalists covering the protests have come under attack in recent weeks. There have also been several incidents where tourists and foreign reporters were seized by vigilante mobs looking out for “spies” and who were subsequently taken to police stations or military checkpoints for investigation. While most of them were quickly freed, Ian Grapel — an Israeli-American law student remains in custody after being arrested in June on suspicion of being a Mossad agent sent by Israel to sow “unrest.”

Attacks on journalists covering the protests and the closure of several Islamist TV channels and a newspaper linked to the Muslim Brotherhood do not auger well for democracy and freedoms in the new Egypt. The current atmosphere is a far cry from the change aspired for by the opposition activists who had taken to Tahrir Square just weeks ago demanding the downfall of an Islamist regime they had complained was restricting civil liberties and freedom of speech.

The increased level of xenophobia and anti-US sentiment could damage relations with America and the EU at a time when the country is in need of support as it undergoes what the new interim government has promised would be a “successful democratic transition.”

One response to “Egyptian media reflects xenophobic sentiment of military”