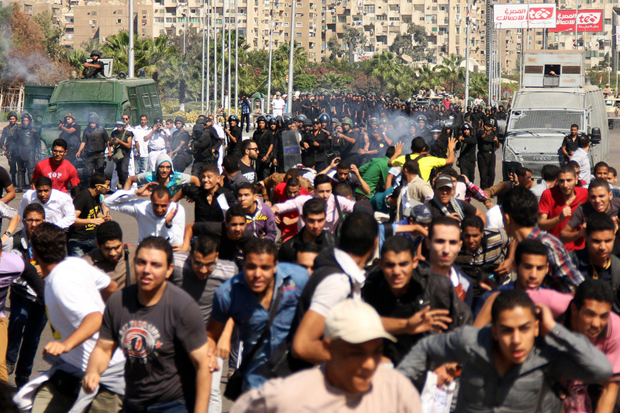 A controversial bill regulating protests has provoked public outrage in Egypt, fuelling fears among rights activists and revolutionary forces that the gains made since the January 2011 mass uprising that toppled President Hosni Mubarak may be reversed.

Slammed by Egyptian rights groups as “draconian” and “repressive,” the proposed draft law gives security forces the right to break up any gathering held without government authorization and allows the use of lethal force against demonstrators “threatening public order.” The protest bill also criminalizes the use of masks or face veils by protesters whilst unlawful demonstrators risk up to five years in prison.

Written by the Justice Ministry and approved earlier this month by the cabinet–albeit with reservations from a handful of liberal ministers– the draft law now awaits ratification by the Interim President Adly Mansour before it can pass. Egypt’s political forces have called on the government to postpone issuance of the law until after parliamentary elections are held in the summer of 2014. In a joint statement released this week by 17 Egyptian rights groups condemning the proposed bill, the activists insisted it should be scrapped altogether and warned it would stifle freedom of expression and is “tantamount to a permanent state of emergency.”

Seeking to appease public anger over the protest bill, Prime Minister Hazem El Beblawi said in a televised interview broadcast on the independent CBC Channel earlier this week, that the government would engage political forces in a discussion on the draft law in the coming weeks and would consider proposed amendments to the bill. The premier’s words however, did little to win over the skeptics: : ” The Interior Minister will have the final word on the matter. That’s because of the media narrative of there being a war on terror,” Hisham Hellyer, a fellow at the Brookings Institute was quoted by the Financial Times as saying this week. Ahmed Maher , the co-founder of the April 6 Youth Movement which played a key role in planning and organizing the 2011 mass protests that toppled President Hosni Mubarak, meanwhile told the Washington Post that the draft law was “an attempt to bring back the police state.” Leaders of Tamarod, the movement that brought the interim government to power by collecting signatures in a petition registering opposition to President Morsi, have also joined the chorus of criticism, describing the draft law as “unjust.”

The outcry over the protest bill comes as the country is wracked by anti-military protests staged by supporters of Islamist President Mohamed Morsi who was overthrown in an army coup on July 3. A brutal security crackdown by security forces to break up two sit ins in Cairo by Muslim Brotherhood loyalists on August 14 and violent street clashes between Morsi’s supporters and his opponents over the last three months have left hundreds of protesters dead (the majority of them from the pro-Morsi camp). In one of the bloodiest days of violence since Morsi’s ouster, at least 57 people were killed on October 6 when Morsi’s supporters clashed with security forces as they tried to reach Tahrir Square to stage an anti-coup rally. Meanwhile, nearly 2,000 Muslim Brotherhood members have been arrested and detained since President Morsi was deposed.

Despite the security crackdown, Morsi’s followers remain defiant and have called for more protests on November 4 –the day the ousted president will be put on trial. Organizers of the protests say they will decry “the kidnapping and trial of the legitimate president” and will also denounce the draconian law they believe specifically targets Islamists. Rights activists disagree however. They say laws indiscriminately apply to all citizens and everyone will pay a price. “Claims that the protest law is to confront the Brotherhood is deception and a lie,” Gamal Eid, a prominent rights lawyer and Head of the Arabic Network for Human Rights Information , wrote on his Twitter feed.

Because of its hawkish tint, some critics believe the law will most likely be ignored by a people who have grown accustomed to expressing their grievances and resentment, post revolution. “There will be no way to curtail Egypt’s flood of protests using the measures stated by the law without forceful confrontations that will inevitably cause further protests in consequence,” political commentator Bassem Sabry wrote in Al Monitor this week . He added that iron-fisted laws like this one –and others such as the proposed anti-terrorism bill that advocates the death penalty for those found guilty of acts of aggression against public property that lead to fatalities– will tarnish the image of the administration and will likely be found unconstitutional under Egypt’s new charter, whose articles reportedly protect the rights to protest.

Rights groups meanwhile said in their joint statement on the proposed bill that social and political solutions –rather than security ones –are needed to restore stability and increase security. Instead of issuing draconian laws that would fail to achieve the desired goals, the interim government should instead focus on reforming the country’s security apparatus through specialized training for security personnel , they advised.

This article was originally posted on 25 Oct 2013 at indexoncensorship.org