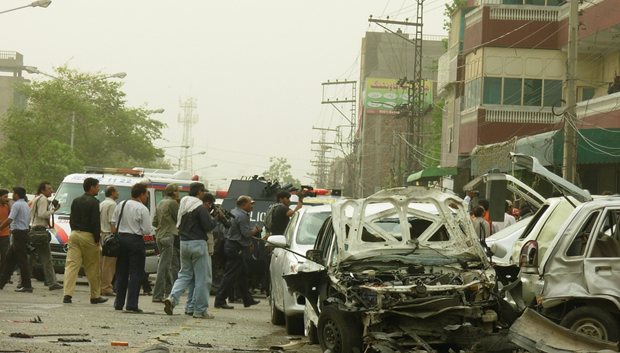 In May 2010, terrorists attacked two mosques belonging to the Ahmadi community. Ninety-four people were killed and more than 120 were injured. (Photo: Aown Ali / Demotix)

As the Muslim festival of Eid ul Adha drew to a close last week, it left a bad taste in the mouth of several Pakistanis when they heard that those belonging to the Ahmadi community were stopped from performing the ritual of animal sacrifice because they are “non-Muslims”.

According to a news report by Express Tribune, police raided a house of an Ahmadi man in Lahore, Punjab, and took him into custody. Police released him only after Ahmadi community elders intervened, giving written assurances that the man will not perform a sacrifice.

“We have slid towards the deep,” said rights activist and filmmaker Feryal Gauhar, quoting Chilean poet Pablo Neruda, blaming the government for not taking action.

“The spiral is rapidly spinning out of control. We are reduced to being passive bystanders to the tragedy that is being played out by forces of obscurantism,” she said.

“I think it’s deplorable and yet another instance of official persecution of the Ahmadis,” said Zohra Yusuf. But she said it was unclear under which law the police took action. “This indicates that intolerance has seeped into the police force, particularly in the Punjab,” she said.

The spokesperson of the Ahmadiyya Jammat in Pakistan, Saleemuddin (who uses his first name) said: “The police should not have given into the pressure of a few hardliners; this only strengthens them further.”

While only two cases surfaced this year, last year, too, a couple of cases were reported. Many fear if not nipped in the bud, this could set precedence for the coming years.

To Pakistani journalist and rights activist Beena Sarwar the episode is reminiscent of Nazi Germany and the persecution the Jews faced. “It goes against the basic tenets of humanity and justice, and the Islamic principle of ‘to you your faith and to me, mine’.”

“Pakistan must, for its own sake, take a firm stand against any such vigilantism and witch-hunting and intrusion into citizens’ personal lives and faith,” Sarwar said.

Every year, Muslims from all over the world gather in Mecca, Saudi Arabia, and perform Haj, between the 8th to the 12th day of the Islamic month of Zil Haj. Among a series of rituals performed that date to the time of Prophet Abraham, is the sacrifice of animals — usually a goat or a sheep (although cows and camels are also slaughtered) and the meat is distributed among relatives and the less fortunate.

“Offering animal sacrifices, particularly on the blessed days of Eid-ul-Adha, is a quintessential Muslim practice that all Muslims deeply cherish. For police to strip Ahmadis of this precious right is a callous and cruel act,” responded Amjad Mahmood Khan, president, Ahmadiyya Muslim Lawyers Association, which is based in the United States, through an email exchange.

“Yes, it is a ritual performed by Muslims, and Ahamdis are not Muslims,” Qari Shabbir Ahmed Usmani, a cleric who lives in Chenab Nagar, Punjab, where 95 percent of its population belong to the Ahmadi faith.

While the Ahmadis, consider themselves Muslims, they believe that Mirza Ghulam Ahmad, a 19th century cleric, “was the messiah promised by God” which is unacceptable to all other Muslim sects.

In 1974, the state of Pakistan declared Ahmadis to be non-Muslims. According to Pakistan’s constitution, they cannot call themselves Muslims, are banned from referring to their places of worship as mosques and cannot sing hymns in praise of the Prophet Muhammad. There are between 2-5 million Ahamdis living in the country.

But Usman, who heads the International Kahtme Naboowat Momin, one of the several religious movements in Pakistan, that aims to protect the sanctity of Prophet Muhammad is not in favour of the banning Ahmadis from performing the sacrifice. “In Chenab Nagar, no Ahmadi was stopped carrying out the sacrifice,” he said.

This was confirmed by Aamer Mahmood, in charge of the press section of the Ahmadiyya Jammat, who lives in Chenab Nagar.

But strong armed tactics to scare the Ahmadis is not restricted to Punjab alone. In September, four Ahmadis were killed in Karachi for their faith, said Mahmood.

In addition, he said, over 60 Khatme-Naboowat Conferences were held on or around September 7 (the day Ahmadis were declared non-Muslims) across Pakistan. Mahmood said a hate campaign forms an integral part of the conferences. The followers are incited to kill Ahmadis as part of Muslim edict.

“Earlier a handful would be held, but this time there was a record number which shows state collusion in stoking anti-Ahmadi sentiment.” he said.

“They are lying,” said Usmani. “We are against every form of violence; they are badmouthing Islam. In fact, had that been the case, do you think there would have been a single Ahmadi still alive in Pakistan?” he said during a phone interview.

“I have before me scores of published press statements and edicts by various Khatme Naboowat leaders from various Urdu newspapers to kill us or openly threatening us to leave Pakistan,” Mahmood countered.

He said he has pamphlets listing the names and addresses of Ahmadi families alongside messages inciting murder.

According to Khan: “The extreme views of a certain militant segment of Pakistan have permeated state institutions and law enforcement. Until and unless the state of Pakistan recognizes that it is only Allah’s place to judge whether someone is a true and righteous Muslim, it will continue down a perilous path towards lawlessness and injustice.”

Gauhar said sadly: “Mohammad Ali Jinnah [the country’s founder] would not own this Pakistan.”

Meanwhile, in the United States, a Congressional-appointed bipartisan federal body yesterday urged President Obama to raise concerns about the “dire religious freedom situation” in Pakistan during their meeting.

“Given that President Obama and Sharif reportedly will be discussing how best to counter violent extremism, we urge the US to incorporate concern about freedom of religion into these conversations,” said Robert George, Chairman of the US Commission of International Religious Freedom.

“To successfully counter violent extremism, Pakistan must have a holistic approach that ensures that perpetrators of violence are jailed, and addresses laws that foster vigilante violence, such as the blasphemy law and anti-Ahmadi laws.

“For the sake of his country, the Prime Minister should be pressed to take concrete action,” George said.

Based on findings of United States Commission on International Religious Freedom (USCIRF), Pakistan represents one of the worst situations in the world for religious freedom, he noted.

“The violence extremists perpetuate threatens all Pakistanis, including Shias, Christians, Ahmadis, and Hindus, as well as those members of the Sunni majority who dare to challenge extremists,” he said.