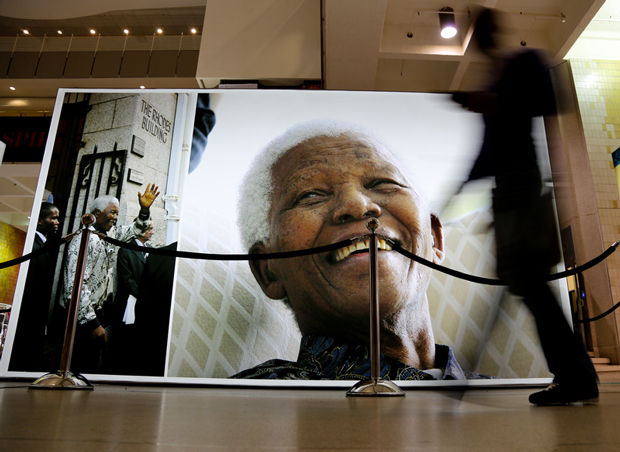 The City of Cape Town launched the Nelson Mandela Legacy Exhibition to honour his contribution to South Africa’s democracy. The exhibiton is a collection of historic photographs and visuals capturing significant moments in Mandela’s life. (Photo: Sumaya Hisham / Demotix)

Chinese coverage of Nelson Mandela’s death has reflected the government’s new-found sympathy for Maoism, its rejection of democracy and its long-standing sensitivities over Tibet and Taiwan.

When Nelson Mandela died, the official statement from President Xi Jinping praised Mandela as “an accomplished politician of global standing,” while state-owned China Central Television described him as “an old friend of China”.

This was to be a precursor for the following day’s censorship — which banned coverage referencing “freedom”,“democracy”, Mandela’s Nobel Peace Prize and foreign policy hot topics Tibet and Taiwan.

While President Xi Jinping did not attend Mandela’s funeral himself, his Vice President Li Yunchao did, and was booed by crowds as he made his memorial speech.

Xi commented on Mandela’s bright smile, called him a “towering figure” and “an old friend of China”. There was no mention of “freedom” or “democracy”.

In an op-ed for CNN, deputy director of Asia division for Human Rights Watch Phelim Kene argued that the deliberate omissions in official statements, as well as the selective censorship policy, was a ploy to distract attention away from China’s own Nobel Peace Prize-winning freedom and democracy activist, Liu Xiaobo.

In 2009, democracy activist Liu was charged with inciting subversion and sentenced to 11 years in prison. His name has since been banned from Chinese micro-blogging sites, although the state-owned Chinese newspaper Global Times broke the ban recently to issue a seething counter-West editorial, accusing American editors of falsely painting Liu as “China’s Mandela”.

According to The Global Times, outlets like The Washington Post, New York Times and CNN had deliberately focused on the imprisonment of Liu in an attempt to foster unrest.

An op-ed argued that “Mandela was awarded the Nobel Peace Prize for leading African people to anti-apartheid victory through struggle, tolerance and efforts to bridge differences,” while Liu had “confronted authorities” and “was dealt with under strict legal procedures. This system ensures that a society of 1.3 billion people runs smoothly.” The piece also argued that “mainstream Chinese society” had rejected Liu’s campaign for democracy.

Yet the circumstances of two men’s imprisonment remain remarkably similar. Mandela was charged and sentenced after he helped produce South Africa’s pro-democracy “Freedom Charter”. Liu, similarly, is one of the activists who drafted “Charter ‘08”, a manifesto for Chinese democracy. Families of both men were persecuted by the state and censorship departments in both countries attempted to remove all mention of the dissenters from the media (including previously written works).

Promotion of Mao’s legacy seems to be Xi Jinping’s communications strategy of choice — and it appears Mandela’s death has been co-opted into this “Maoisation” of Chinese politics. State press releases asserted that Mandela had read Mao’s “Little Red Book” while imprisoned on Robben Island, as well as describing himself as a “student of Mao”.

Mandela was certainly  a fan of Mao, though principally for his military strategies rather than his later domestic policies. In a TIME Magazine interview, he praised the tactics used during the “Long March”, as well as his “determination and non-traditional thinking,” which Mandela briefly noted in his autobiography Long Walk to Freedom.

Overall, the Chinese press complied with censorship restrictions to censor the words “freedom” and “democracy” from accounts of Mandela’s life and death, as well as steering clear of Tibet and Taiwan, both contentious foreign policy issues that Mandela had previously weighed in on. Under his presidency, South Africa cut off ties with Taiwan over its previous support for Apartheid, and in favour of Communist mainland China.

Mandela had also met with the Dalai Lama on several occasions, who issued a video tribute to Mandela. The Tibetan leader has been refused a visa to visit South Africa twice in the last four years, regarded by many as an attempt not to risk diplomatic relations with China.

A dictat from China’s Foreign Ministry also attempted to censor “posts and comments on Weibo that take advantage of Mandela’s funeral to attack our political system and state leaders”, ordering offending content to be deleted immediately.

Property tycoon Ren Zhiqiang commented on Weibo: “Because he was a fighter — for all his life— for democracy, equality and peace and harmony, he is now an icon of all these.” Another user, from Shanxi, wrote “A great leader, rest in peace.”

Some Weibo users employed sarcasm to express their views. In response to philanthropist Fan Wei asking “Will China have its own Mandela?” one user replied, “Heroes only appear in turbulent times. In our ‘harmonious’ homeland, there is no use for Mandelas.” Another simply said, “They are in prison.”

“Old friend?” another user mocked. “He pursued justice, fairness and freedom. Does he have anything to do with you? Don’t blow your own trumpet.”

Notably, the so-called “New Left” Maoists reacted hotly to the government’s comparisons, with Weibo messages strongly in favour of Mao Zedong over Mandela.

“India’s Gandhi and South Africa’s Mandela were great. But Chairman Mao surpassed them all,” said one.

Another commented, “Mandela had bowed to racism. His consideration of the Tibetan independence movement as a human rights movement was a big, big mistake. He is a banana with dark skin.”

The death of Mandela has also resurrected an unlikely pop song from the 1990s. The Hong Kong-based band Beyond surged back into the charts with their song “Glorious Days”, reaching number one after almost a decade of hiatus.

“Glorious Days” had already achieved chart success in the post-Tiananmen era, when many were afraid to discuss political issues. Released in the midst of a music scene that mainly comprised of love songs, the Cantonese pop band achieved record sales with a song about racial equality, which was dedicated to Nelson Mandela.

This article was published on 19 Dec, 2013 at indexoncensorship.org