The political prisoner can be “pardoned” if “it is proved the damage he caused with the tax fraud has been repaid.” 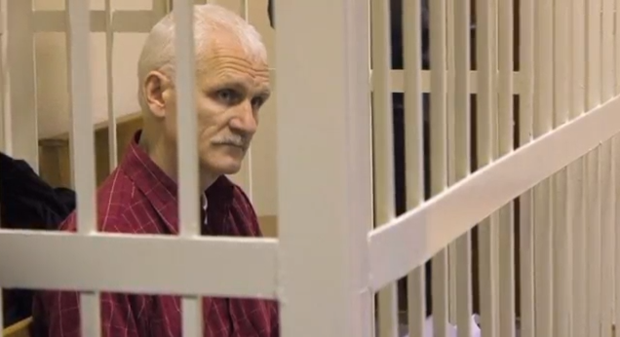 Belarusian president Alexander Lukashenko has said in a press conference in Minsk today that human rights defender Ales Bialiatski could be released from prison soon. This came in response to Ales Lipay, editor of BelaPAN news agency, asking about the possibility of amnesty for Bialaitsky, who has been imprisoned since 2011. He is accused of evading taxes on 90,000 US dollars.

“That damage was repaid to the state long ago with citizens’ donations; there were cases in Belarus when business people who faced economic charges were released after repaying much bigger sums. In neighbouring Russia, President Putin released Mikhail Khodorkovsky who was charged with causing the state damage of 500 million US dollars,” Lipay suggested in his question.

“This is a serious argument,” Lukashenko replied. “This has nothing to do with politics or Biliatski’s views. I swear I have never known him personally […], but taxes are a sacred thing.”

According to Lukashenko, if the information about the damage allegedly caused by Bialiatski being repaid is true, amnesty can be considered. He also suggested other political prisoners, like former presidential candidate Mikalay Statkevich, can be released if they apply with a relevant plea for a presidential pardon.

“Lukashenko’s statement shows he thinks about the issue of political prisoners; he definitely aims at solving this problem without any damage to his image as a strong leader,” Tatsiana Raviaka, Bialiatsky’s colleague at the Human Rights Centre Viasna, told Index. “The reason Lukashenko might want to solve it now is reputational as well, because Belarus is hosting the Ice Hockey World Championship in 2014, and looks into ‘clearing’ its record on political prisoners.”

Raviaka says there could be a slight “warming” of the overall human rights situation in Belarus as the authorities tend to “play the liberalisation game a couple of years before the presidential elections.”

“That was the case in 2008, before the severe clampdown came in late 2010; now we can face the same period of relative easing of the situation before the 2015 campaign. I think the firm position of the EU on the release of political prisoners as a pre-condition for any dialogue with the Belarusian authorities has also played its role. Besides, I am sure Lukashenko is following the developments in Ukraine, and he sees that further ‘tightening the screws’ can lead to serious protests,” she adds.

According to Raviaka, it is possible Bialiatski could be released, as “it is entirely the issue of political will”.

Ales Bialiatski is the chair of the Human Rights Centre Viasna, and a vice president of the International Federation for Human Rights. He was arrested on 4 August 2011 and later sentenced to four-and-a-half years in prison. Despite charges of tax evasion, the country’s civil society and the international community see his prison sentence as punishment for his principled stance in support of human rights in Belarus.