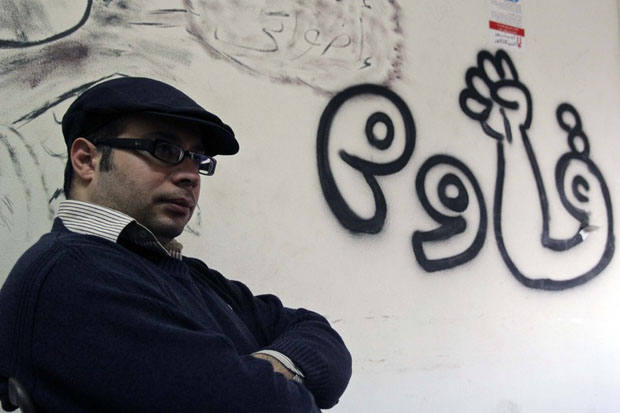 Head of the April 6 Youth Movement Ahmed Maher and two other activists were in December sentenced to three years in prison, among other things for “staging a protest rally without prior permission from the authorities” (Image: Roger Anis/Demotix)

After officially classifying the Muslim Brotherhood as a “terrorist organisation”, Egypt’s military-backed regime has in recent days, widened its crackdown on supporters of the Islamist group.

On Friday, seventeen Islamist “anti-coup” protesters were killed and scores of others were injured in clashes with security forces nationwide, Egypt’s Health Ministry said. Meanwhile, three journalists working for the Al Jazeera English channel remain in custody pending investigations on charges of “being linked to a terrorist organisation and spreading false news that harms national security.” Egyptian officials have accused the Qatari-based Al Jazeera network of backing the Muslim Brotherhood.

Three prominent revolutionary activists also languish behind bars after being handed down three-year jail sentences in December. Ahmed Maher, Founder/Head of the April 6 Youth Movement (one of the two main groups that planned and organised the 2011 mass uprising), Mohamed Adel, a member of the April 6 group and activist Ahmed Douma have been accused of “thuggery, assaulting police officers and staging a protest rally without prior permission from the authorities.” In November, the Egyptian government passed a controversial law criminalising protests without permission from the Interior Ministry.

The activists are on hunger strike to protest their imprisonment on what they — and various rights organisations — have described as “politically-motivated” charges. They are also protesting the harsh prison conditions and their “maltreatment” at the hands of prison guards and inmates.

On Saturday, the Free Alaa Facebook group slammed the “rights abuses” the detainees face at Torah high security prison where they are being held. According to a statement posted on the group’s Facebook page, the detainees are being held in solitary confinement for 22 hours a day and are being denied access to all forms of communication including with family members. “It has become clear to the detainees and their families that the Interior Ministry is not solely responsible for the rights violations. The Public Prosecutor’s Office and the Prison Administration are also implicated,” the statement said.

Other activists too are paying a high price for their criticism of the regime. Political activist Alaa Abdel Fattah, a symbol of the January 2011 Revolution, his sister Mona Seif (Founder of the No To Military Trials movement) and ten other defendants on Sunday received a one year suspended jail sentence for allegedly “attacking the campaign headquarters of former presidential candidate Ahmed Shafik in May 2012”. Both Alaa and Mona have denied the allegation. Before appearing in court on Sunday, Seif told the independent Al Shorouk newspaper that there was no evidence to incriminate her — or her brother — in the case. Alaa will remain in jail on other charges including for allegedly “organising and taking part in an unauthorised November anti-military protest rally”. Alaa has denied organising the protest. His imprisonment, meanwhile, has provoked an outcry from rights campaigners who believe the activist has been jailed “for his oft-scathing criticism of the abuses committed by the security forces.”

Meanwhile, other revolutionary activists have decried what they describe as “efforts by the current regime to defame them”. Asmaa Mahfouz, an internet activist who played a key role in the mass mobilisation of Egyptians that led to the January 2011 Revolution and former MP and activist Mustafa El Naggar have filed lawsuits against TV talk show host Abdel Rahim Ali (widely believed to have close links with the country’s various security agencies) after he aired what he claimed were taped telephone conversations by the activists. The leaked conversations, broadcast last week on TV show “The Black Box” on the privately-owned satellite channel Al Qahira al Nas, provoked an outcry from Egyptian rights organisations. A joint statement released by several rights groups denounced the leakages as “a breach of privacy and a serious violation of basic individual and civil liberties.” The statement also called on the authorities to bring those responsible for eavesdropping, taping and broadcasting the telephone conversations to justice. Ali has remained defiant however, subsequently vowing to air many more taped telephone calls which he claimed would “expose those implicated in a foreign plot to destroy the country.”

The leaked telephone conversations focused on secret documents seized by the activists in question on March 4, 2011. That was the day hundreds of protesters stormed the offices of the much-detested State Security Service, the SSS, to acquire documents they hoped “would expose the crimes of the security agency against Egyptians during the Mubarak era”. The SSS was dismantled shortly after the raids and was renamed “National Security.” The military rulers who replaced Hosni Mubarak immediately after the January 2011 mass uprising, had vowed at the time that the new security authority would be solely concerned with dealing with “national security issues” and would not repeat the practices of the old SSS (including mass surveillance and spying on citizens). As a result of the recently televised leaks, several “private citizens” have filed lawsuits against Mahfouz and Israa Abdel Fattah (another prominent internet activist and former member of the April Six group) accusing them of “inciting the raids on the SSS Headquarters”.

In comments posted on his Facebook page, former lawmaker El Naggar said the leaked conversations were a form of revenge by the state against revolutionary activists. He also described them as a means of “character assassination to defame him and other political opponents of the military-backed regime.”

Meanwhile, an online statement released on January 3 by Amnesty International urged the authorities in Egypt to “halt their crackdown on vocal critics of the regime — including the use of politically-motivated trials to punish dissidents.”

One activist who chose to remain anonymous has best described the heavy-handed, repressive measures used by the state to intimidate and silence critics as “counter-revolutionary practices” which he said were designed “to crush dissent and wipe out all traces of the January 2011 Revolution.”

“But the critics will neither be intimidated nor silenced,” he said. He added that  “the current regime tends to forget that the fear  is gone… There is no going back to pre-January 2011.”

This article was published on 7 Jan 2014 at indexoncensorship.org