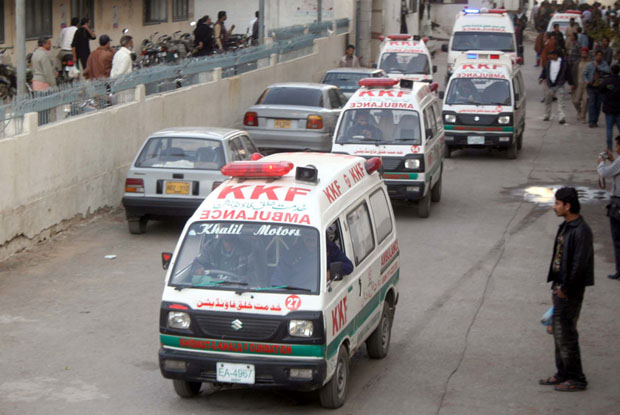 The ambulances transporting the bodies of the six young men killed in Gadap Town on the outskirts of Karachi (Image: Ppiimages/Demotix)

In a fresh wave of violence that gripped the southern port city of Karachi at the turn of the new year, six young devotees of Sufi saint Ayub Shah in Gadap Town, on the outskirts of the city, were killed on January 7. Their bodies were found by the caretaker the following morning in a mud-house close to the shrine.

A note left near the dead, allegedly by the Tehrik Taliban Pakistan (TTP), stated that a similar fate awaited anyone visiting the shrine. The police told AFP the note said: “Stop visiting shrines!”

Sufism, strongly practiced in Pakistan’s Sindh province, is opposed by the Taliban who follow the Wahabi and Salafist school of Islam.

The brutal killings have reinforced the long-standing fear among the people of Karachi that the militant group which infiltrated the city a few years ago has now not only consolidated itself, but is also imposing its belief system.

“The part of Karachi where this incident took place is a known stronghold of the Taliban,” explained Imtiaz Ali, correspondent for Dawn newspaper. He said Wall Street journalist Daniel Pearl’s body was also found in Gadap. Taliban commander Mullah Abdul Ghani Baradar, also one of the four men who founded the Taliban movement in Afghanistan in 1994, was arrested from there in 2010. Gadap has often been in the news during anti-polio campaigns which have had to be suspended in recent years after attacks on vaccinators and health workers.

Just a month back, 25-year-old Bilawal Bhutto Zardari, son of former prime minister Benazir Bhutto, had warned of the Talibanisation of Pakistan. “They are surrendering our culture, our history, our identity and our religion based on a lie cloaked in an imported, fictionalised version of Islam,” he said at an event announcing a two-week cultural festival to take place in February.

While Karachi is no stranger to violence, Ambreen Agha,  research assistant at New Delhi’s Institute for Conflict Management, agreed with Zardari. This particular incident, she said, should definitely ring alarm bells for Pakistan’s security apparatus as it indicated the “deeper penetration” of Pakistani Taliban in the city.

“The TTP’s upward mobility should be taken as a serious threat for the concerned agencies,” she said, warning that the gradual trickling down of the “Talibanised ideology” posed a potent threat to the establishment.

It also puts a big question mark on the targeted “operation” carried out by security forces and law enforcement agencies in the city, which have been ongoing since September. Touted as a success by the government, Sindh governor Ishratul Ibad last week voiced his satisfaction, saying there was a “significant decrease” in target killings and kidnappings for ransom.

Labelling the operation nothing but “buffoonery and horseplay”, Agha, however, pointed out: “The tact with which the outfit [Taliban] carries out its activities and the pattern that they follow in the metropolitan city suggests something more than what meets the eye.” She added: “TTP’s operational success suggests implicit collusion with the gangsters and their political patrons.”

“The claims of success by the Rangers [paramilitary force] should be questioned,” said Zohra Yusuf, the chairperson of the independent Human Rights Commission of Pakistan.

Naeem Sadiq’s, a citizen of Karachi, says the militant attacks “are a result of the armed private militias, so faithfully encouraged by the government’s own ‘proliferation of weapons’ policy.” He believes the only way to prevent incidents like Gaddap, is to cleanse the city of weapons and has filed a petition in the Supreme Court of Pakistan calling for this. “De-weaoponise all individuals and groups – starting with the world’s most militant parliament with its 69,473 prohibited bore weapons!” he said.

This article was posted on 10 Jan 2014 at indexoncensorship.org