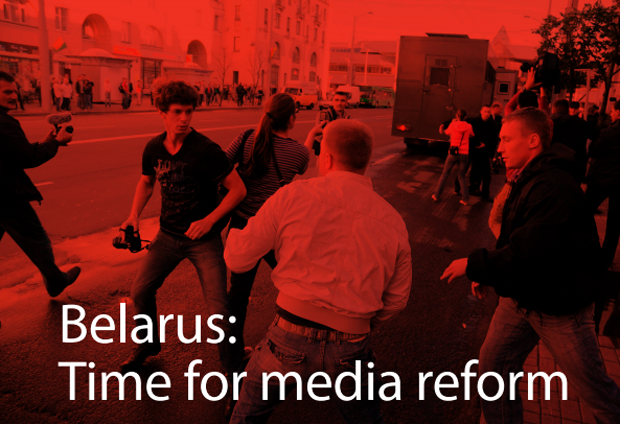 In a new policy paper, launched today in Minsk, Index on Censorship calls for the much-needed reforms of the media field in Belarus.

Belarus continues to have one of the most restrictive and hostile media environments in Europe. Recent years have brought no genuine improvements to the media situation. In a country that has not held a free and fair election since 1994 the authorities keep tight control over the media as a means of preserving their power.

The police use violence and detain journalists, especially those who cover protests.

8 February 2014 will mark the 5th anniversary of the current media law in Belarus. Restrictive media legislation and its oppressive implementation have made the media landscape unfavourable for freedom of expression.

Andrei Bastunets, a vice chairperson of the Belarusian Association of Journalists, and a co-author of the report, said:

“The media law in Belarus fails to foster the development of pluralistic and independent news media through a complicated procedure of compulsory registration of new media outlets and possibilities for the state to close down existing media even for minor infringements. The authorities clearly look into expanding the restrictive regulation to online news media.”

Despite ongoing pressure by international community and Belarusian civil society, the authorities of the country have been quite reluctant to discuss or implement recommendations on media legislation or changes in practices of their implementation to bring them in line with international standards.

“We urge the Belarusian authorities to immediately remove all contraventions of human rights and media freedom. The much-needed reforms of the media field should be launched in order to end harassment and persecution of journalists, and eliminate excessive state interference in media freedom. The outline of these reforms should result from a dialogue with professional community and civil society of the country.”