DEFAULT
Egypt: Anyone posing a threat to national security "must be annihilated" 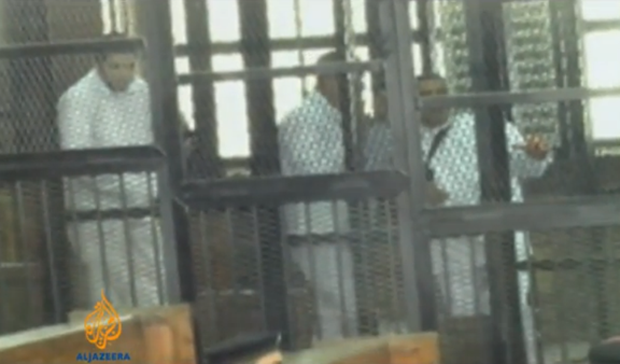 The trial of 20 journalists charged with spreading misinformation and aiding or belonging to a terror cell has been adjourned until March 24.

Only six of the defendants — including three who work for the Al Jazeera English (AJE) service — appeared in court on Wednesday, eighteen days after pleading not guilty to the charges levelled against them.

The widely publicised case known to Egyptians as the “Marriott Cell” case is a test for the new Egyptian authorities’ tolerance of free speech and press freedom, say rights organizations and press freedom advocates. Last week, journalists in cities around the world held rallies outside Egyptian embassies to express their solidarity with the Al Jazeera detainees. Meanwhile, an online Avaaz petition launched a few days before the resumption of the trial on Wednesday and calling for the release of the detained journalists, had already collected more than 50,000 signatures by the time the court session opened at the Torah Police Institute in Cairo.

Al Jazeera has rejected the charges, expressing its disappointment at the trial’s adjournment. “Our journalists were simply doing their job, covering and challenging all sides of the story in Egypt,” Al Anstey, managing director of Al Jazeera English, said. “To continue to keep them behind bars after such a long time in detention is simply outrageous, so we continue to call for their immediate release.”

Australian journalist Peter Greste, Egyptian-Canadian AJE Cairo Bureau Chief Mohamed Fahmy and producer Baher Mohamed, arrested on December 30, remain behind bars at Cairo’s Torah Prison after the judge declared the trial’s adjournment “to allow more witnesses to be heard”. Abdulla El Shamy, a fourth Al Jazeera journalist who has been in jail since August 14 and is on hunger strike to protest his confinement, did not appear in court on Wednesday.

At Wednesday’s session, the judge examined “the evidence” provided by the prosecutors in the case: equipment seized by the police when they raided the hotel suite used by the Al Jazeera team as a makeshift studio. To foreign journalists attending the trial, the set of cameras, laptops , mobile phones and electrical cables displayed in court looked much like the regular set of tools used by journalists to do their work.

At the start of the session, Soheib Saad, one of the defendants shouted out from the steel cage “journalists are not terrorists.” He was arrested at a checkpoint and told the court he had been tortured by members of the national security apparatus before being brought to prison. He added that he had been denied family visits for 40 days and was not getting enough food. Soheib also told the judge he did not know what he was doing there as he had no connection with the detained Al Jazeera journalists.

Mohamed Fahmy pleaded to the Judge to release him on guarantees from the Canadian embassy that he would not travel abroad. “I would never betray my country,” he insisted. Fahmy whose right arm was in a sling because of a shoulder injury sustained before his arrest, complained that he had been denied medical treatment for his injury and that he was sleeping on the floor.

Peter Greste spoke little during the session, merely responding with “I’m here” when he heard his name called out by the judge. With no interpreter on hand to translate the court’s proceedings, he appeared frustrated that he could not understand what was being said in the courtroom.

An eyewitness from national security services who testified in the case admitted that he did not know the difference between Al Jazeera English and the network’s sister channel Mubasher Misr, accused by many Egyptians of being a mouthpiece for the outlawed Muslim Brotherhood. “I am not a media person so I wouldn’t know the difference,” he told the court. Asked if he believed Mohamed Fahmy was a member of the Muslim Brotherhood, declared by Egyptian authorities in December to be a terrorist organisation, he replied, “Fahmy works for a network that incites violence and portrays Egypt as being in the midst of a civil war so yes, he is a member of the terror cell.”

Another witness who is also a member of Egypt’s national security apparatus and who will testify at the next court session told Index outside the courtroom: “This is a war for Egypt’s very survival, for its existence. Anyone posing a threat to the country’s national security must be annihilated.”

In a country rife with conspiracy theories of plans by external powers to destroy Egypt and divide the country, his chilling words do not bode well for the fate of the Al Jazeera detainees.