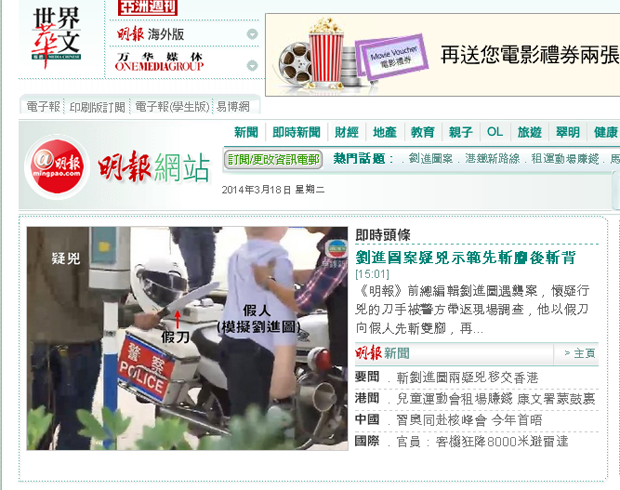 Hong Kong journalists are anxious at present – with good reason. On the morning of 26 February Kevin Lau, former chief editor of Hong Kong daily newspaper Ming Pao, was attacked as he got out of his car. Suffering stab wounds to his back and legs, Lau was rushed to hospital where he underwent emergency surgery.

Nine men have since been arrested over the attack, with police saying some are linked to organised crime. But many media workers believe differently, namely that the stabbing was provoked by Lau’s record of pushing journalistic boundaries at Ming Pao, and that it’s a message for local journalists to beware criticising Beijing.

Once a British colony, Hong Kong reverted to Chinese rule in 1997. Under the policy of “One Country, Two Systems”, Hong Kong was granted a degree of autonomy, with press freedom protected under the Basic Law.

The law isn’t a total farce. To this day, the city’s newsstands display a varied, vibrant collection of papers. In Reporters Without Borders’ World Press Freedom Index 2013 Hong Kong was ranked 58 globally, just one slot below Italy and far above China at 173.

However, beneath the surface a different story emerges. Over the past year, half a dozen violent attacks on people in media who are critical of the Hong Kong and Chinese governments have been reported, as have abrupt dismissals and resignations of several outspoken journalists.

“It’s a creeping, insidious type of thing. If you want to keep your job, you tow the line. I work with guys who are pro press freedom, but they are still censoring constantly,” said a journalist who only agreed to talk on condition of anonymity. The man, who is a reporter at a prominent local newspaper and has been living in Hong Kong for three decades, explained how self-censorship started to emerge in the mid-90s and has become rife in recent years.

Then there are the “gatekeepers”, as he refers to them – journalists who have been educated in the Chinese school of journalism (“never question authority”) and are encouraged to run stories according to a Beijing agenda. They now get their information from Chinese media sources such as Xinhua and China Daily, as opposed to the past practice of using Reuters, AP and other international news wires.

Why has this situation emerged? Money’s a big factor. Media owners in Hong Kong used to be either local business tycoons or people in media themselves. Now they’re predominantly international businessmen with links to China, who are reliant on Chinese currency to stay afloat. According to the Committee to Protect Journalists, over 50% of Hong Kong’s media owners are closely connected to the Chinese government. Other media owners, such as the Malaysian billionaire Robert Kuok from the South China Morning Post and Malaysian Tiong Hiew-king of Ming Pao, have strong commercial interests in China.

One exception to the rule is Next Media, a profitable company that owns Apple Daily, one of Hong Kong’s most widely read newspapers – and the most openly critical of China. Next Media has survived the onslaught. But certain advertisers have withdrawn sponsorship, acting as a deterrent for smaller, less profitable papers.

Gregory Lee, an academic and writer who lived in Hong Kong on both sides of the handover, says the academic press is under attack too. The days of people publishing in Hong Kong because they couldn’t in China have ended. Lee knows of one academic who criticised China’s former leader Hu Jintao and had his entire book pulled.

Lee currently teaches Chinese studies at the University of Lyon, France. Even thousands of miles from Beijing, the Communist government’s touch is still felt.

“I’ve got Hong Kong students here who are desperate about the encroachment of mainland China on Hong Kong culture. What’s interesting is that these students were very young when the handover happened, but they still see their identity as Hong Kong.”

One thing’s for sure, Hong Kong residents will not be easily silenced. In the wake of Lau’s attack, thousands took to the streets to voice support for press freedom and to denounce the violence, and this protest was just a warm-up. Occupy Central, which is set to take place in July, should see plenty more out in public demanding rights to freedom of expression.

“Hong Kong has a golden opportunity to be a watchdog for what’s happening in the mainland, due to its proximity and links to China, and yet the press are failing in their duties,” says prominent blogger and activist Tom Grundy, who plans to attend Occupy Central. Grundy believes the protest will be “a defining moment for Hong Kong autonomy” as the government is presented with different ways to respond.

Attending Occupy Central is not just about protecting Hong Kong’s present – it’s about the future too.

“There’s a concern that when 2047 comes, Hong Kong will be absorbed by the mainland,” Grundy says of the “One Country, Two systems” agreement that will expire then.

Back in the hospital, Lau’s recovery is underway. The nerves in his legs are healing and doctors are confident he will walk again. The future of Hong Kong’s free press, on the other hand, remains in the balance.