NEWS
Chinese tourists are inadvertently reporting on the Tibetan struggle

While Tibetans face fierce internet restrictions, Chinese tourists appear to be breaching “the great Firewall of China” by sharing holiday snaps with friends back home 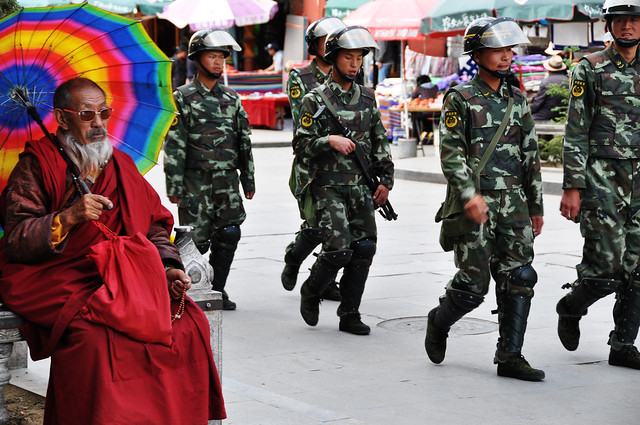 “What kind of device is that sniper on the rooftop using?”

These are the messages sent by ordinary Chinese tourist about their trips to Tibet, collected by the International Campaign for Tibet, and published on their website.

While Tibetans themselves face fierce internet restrictions and harsh penalties if they try to spread information about the military occupation, Chinese tourists appear to be inadvertently breaching “the great Firewall of China” by sharing holiday snaps with friends back home. The messages and photos, which have been leaking out fairly infrequently since 2009, represent a rare source of information for those interested in repression in Tibet.

The tourists post photos of the considerable military presence — despite occasional warnings. Most comment on the large numbers of troops deployed.

“You can see People’s Armed Police troops everywhere in Lhasa. A guard post every ten meters…”

“Every three steps there’s a heavily armed People’s Armed Police checkpoint, there are armoured vehicles and tanks which you wouldn’t dare to photograph.”

One photo shows a column of a hundred or so Chinese soldiers marching down a street. Another shows armoured cars on the move, and another a cohort of tanks. A picture sneakily snapped behind some marching soldiers shows fire extinguishers strapped to their backpacks.

Also striking amongst the comments are what appear to be genuinely held fears by Han Chinese tourists about the Tibetan residents.

“The number of Tibetans going back and forth on the streets made us worry about our safety, but when we asked the officer on duty they said it was safe, no problem.”

“Tibetans have a very strange look in their eyes, especially at night. It’s best not to do anything on the street by yourself,” said one, who admitted to carrying a Swiss Army knife during his trip, for protection.

These images are precious. Research in 2012 showed that half of all Weibo posts originating from Tibet were being deleted, compared to just 12% in Beijing. Last year, authorities installed a new system for monitoring both internet and phone traffic — while Tibetans living in nearby Sichuan province have seen their internet connections shut down en masse.

Anne Henochowicz, Translations Editor for China Digital Times, remembers a recent crackdown: “For several weeks in early summer 2012, Tibet was sealed off from all foreign visitors,” she told Index. “It was following two self-immolations in Lhasa in May. Chinese tourists were still allowed entry, and posted photos of armed troops in the city streets, along with posts describing increased security measures.”

Translations of the messages were posted on China Digital Times, an independent news website with a focus on freedom of expression in China’s complex and highly restricted online space.

Dechen Pemba, UK resident but editor of the Tibetan website High Peaks Pure Earth, put the leaked images in perspective: “Tibetans are not free to comment, document or report on their own situations. You only have to look at what happened to Dhondup Wangchen in 2008,” she told Index.

Wangchen was sentenced on 28 December 2009 following a secret trial in Xining city, western China, receiving six years in prison for producing a documentary film interviewing 100 Tibetans. He is one of many Tibetan political prisoners in China.

“Tibetans are well aware of the risk of using Weibo and public platforms online,” says Pemba. “Despite controls, Tibetans are also finding other ways to speak out and express themselves such as through poetry and song.” Pemba’s blog has been key in highlighting this trend — offering translations of works by Tibetans.

During high-tension periods, Chinese forces are not afraid to take special measures. In 2011, Pemba points out, searching Chinese social media site Weibo for mentions of “self immolations” yielded zero results. This was strange, given seven self-immolations had occurred in the past three weeks.

“After the riots in 2012,” continues Pemba. “Internet connections and mobile phone signals were cut off for over 50 kilometres around the areas affected.”

The Save Tibet campaign continues to document all of these images, under the title “Has life here always been like this?”. It has been extremely difficult to find information about Tibet without either going there, or relying on opportunistic citizen journalism. Chinese tourists, snapping away and posting to Weibo, provide a surprising back-channel into the Tibetan struggle.

This article was published on 25 March 2014 at indexoncensorship.org