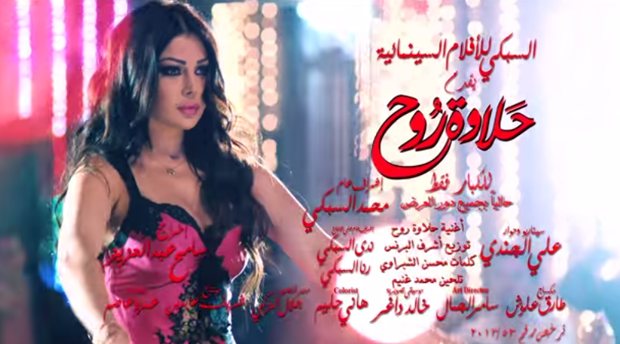 A shot from the trailer of Halawet Rooh (Image: Mohamed Elsobky/YouTube)

Just as Egyptian free expression advocates were celebrating the decision by Egypt’s State Censorship Board to allow the screening of Darren Aronofsky’s Biblical epic Noah, news of the withdrawal of Lebanese diva Haifa Wehbe’s new film Halawet Rooh (Beauty of the Soul) from theatres in Egypt put a damper on their cautiously optimistic mood. The fact that the decision to suspend the screening of the controversial film was made by interim Prime Minister Ibrahim Mehleb — rather than by the censors — has added fuel to the fire.

Former Culture Minister Emad Abu Ghazy reminded the prime minister of a court ruling forbidding interference in the work of the independent censorship board. “The Premier has no right to suspend the screening of the film,” Abu Ghazy told AFP.

Popular TV talk show host Ibrahim Eissa meanwhile, cautioned that the ban does not auger well for freedom of expression.”Those who ban films today for damaging public morality will in future, ban films for political reasons,” he warned in an episode of his show “Hunna Al Kahera” broadcast on the privately owned CBC Channel.

Rights activists and groups have also expressed concern over the suspension of the film’s screening, saying the move is part of a wider clampdown on artistic expression in Egypt. In his column in Saturday’s edition of the independent newspaper Al-Shorouq, film critic Kamal Ramzy chided the government for not having learnt history’s lessons on censorship. “Instead of focusing on problems of corruption and the rule of law, the prime minister is instead, more occupied with censorship,” he lamented.

Mehleb meanwhile, downplayed the criticism levelled at him. At a meeting with intellectuals and literary figures on Saturday, he insisted that “there is a clear cut distinction between freedom of artistic expression and creativity on the one hand, and infringement on moral values on the other”.

The premier’s decision to suspend the screening of the film came in the wake of an outcry from conservatives in Egypt who denounced the film on social media networks as “obscene” and “a threat to public morality”. Oddly enough, some “liberal” Egyptians too, have joined the online campaigns accusing Ahmed El Sobky, the film’s producer of “destroying an entire generation” and being “more dangerous than bombs and missiles”. El Sobky’s trademark films are often “low quality” productions characterised by a mix of violence, belly dancing and sexually explicit scenes. His target audience are generally the uneducated, low income youth who traditionally celebrate public holidays by going to the cinema.

Film critics have also decried the film as “sexually provocative,” lambasting lead actress Haifa for “revealing too much flesh”. “There is hardly a scene in which Haifa does not appear half nude,” scoffed critic Ramy Abdel Razak in his review published Thursday in the independent daily Al Masry El Youm.

Critics question how a particularly steamy scene in which Haifa’s clothes are ripped off by a rapist, got past the State Censor board. Overlooking the fact that the film was rated “Adults Only” — which meant it was inaccessible to children under 16 — Egypt’s National Council for Childhood warned in a statement released last week, that the film was “harmful to minors” and “violates public morality”.

The “raunchy” film had been in cinemas for two weeks before it was removed and had reportedly grossed some £84,100 in its first week in theatres. At the time of publication, a two-minute trailer for the film on YouTube had over 3,6 million views.

Described by critics as a “poor imitation of Italian director Giuseppe Tornatore’s widely-acclaimed Malena”, the film tells the story of a young boy’s obsession with a beautiful nightclub singer. The woman, whose husband is abroad, is pursued by the men in her working class neighbourhood and her ardent young admirer subsequently takes it upon himself to protect her.

Fifteen year-old Karim El Abnoudi, who plays the role of the boy infatuated with Rooh, has reportedly been verbally harassed at his school and on the streets, with his classmates and some laymen — angered by what they had read or heard about the film — hurling insults at him and calling him “an infidel”.

The withdrawal of the film from theatres has fuelled fears among some secularists and rights organisations that increased censorship is stifling freedom of artistic expression and creativity in Egypt. In March, the State Censorship Board banned 20 music videos from Egyptian TV Channels for allegedly containing “explicit content”. In another sign that the interim government is putting the lid on artistic expression, a misdemeanour court in the Southern Egyptian province of Bani Suef in March upheld a verdict against Egyptian author and rights activist Karam Saber, who eight months earlier had been sentenced in absentia to five years in prison and LE1000 in bail for “blasphemy”. In June 2013. Saber was convicted on charges of “contempt of religion” and “inciting sedition” in a collection of short stories he wrote two years earlier titled Where is God? Both Al Azhar (the country’s highest Islamic authority ) and the Coptic Orthodox Church had earlier concurred in the opinion that the book was “blasphemous” and “ought to be banned”.

In a joint statement released in September (in the wake of the sentence handed down to Saber), 46 Arab Human Rights Organisations expressed concern for the diminishing space for free artistic expression and creativity. The Arab Network for Human Rights Information also said the verdict against Saber “belies any notion of respect for human rights by the state and violates provisions in the new constitution guaranteeing freedom of creativity and artistic expression”.

A provision in the new charter, endorsed by an overwhelming 98% of voters in a popular referendum in January, guarantees freedom of thought and opinion stipulating that any individual “has the right to express his opinion and to publicise it verbally or in writing or by other means”. Another provision in the 2014 constitution guarantees freedom of literary and artistic creation, stating that “the state shall promote art and literature, sponsor creators and protect their creations, providing the necessary means to achieve this”.

Many artists and writers had joined the mass protests in January 2011, hoping that the revolution would bring an end to decades of repression. For a short period after the fall of authoritarian president Hosni Mubarak, Egypt’s artists and literary figures capitalised on their new-found freedoms, tackling subjects long off limits to them — like sex and religion.The rise of Islamists to power in 2012 , however brought new limitations to the short-lived free flow of artistic and creative expression. New legislation was introduced by the Islamist-dominated parliament, banning art with obvious sexual references as well as concerts featuring female singers. The downfall of the Muslim Brotherhood regime in July 2013 rekindled hopes for an end to censorship and suppression of creativity. But in the new restrictive cultural atmosphere — reminiscent of the Mubarak era — these hopes have been quickly dashed, giving way to disappointment, frustration and fear.

“It is ironic that the ban on Wehbe’s film would come from the interim government that replaced the ousted Islamist regime,” prominent blogger Zeinobia wrote last week. Many of the liberal Egyptians who joined the uprising against the Muslim Brotherhood president in July last year had said they were protesting against “religious fascism” and had hoped the new government would be secular and more democratic.

“The interim government has demonstrated that it is more Islamic than the Islamists,” lamented Sameh Kassem, culture editor at the independent Al Bawabh news website .

“The withdrawal of Wehbe’s film from theatres and the verdict against Saber are attempts by the interim government to appease the ultra-orthodox Salafis ahead of presidential elections scheduled on 28 and 29 May,” he told Index.

Egypt’s Salafis, the ultra-conservative Islamist movement that had initially backed ousted Muslim Brotherhood President Mohamed Morsi, later decided to side with the military and lent its support to the military-backed interim government after his deposition.

“The military-backed authorities are trying to woo the Salafis to guarantee their votes for former military chief Abdel Fattah El Sisi in the upcoming elections,” Kassem said.

This article was originally posted on 22 April 2014 at indexoncensorship.org