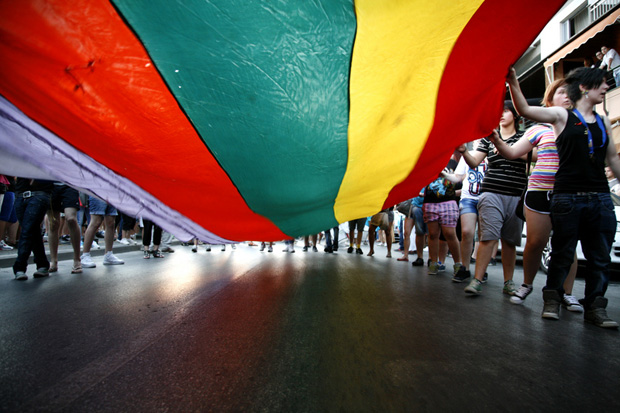 There is a “dictatorship of the gay minority” and gay people should be “treated” by members of Golden Dawn. These are only excerpts of a 15-minute homophobic rant by journalist Dimos Verikios during a recent episode of his daily show on Alpha radio station. The outburst was met with a number of complaints and social media outrage, and has been condemned by the Journalists’ Union of Athens Daily Newspapers.

Verikios was targeting gay writer Auguste Corteau, who revealed his sexuality by publicly stating that he won’t be joining new political party The River, preferring to stay loyal to his husband and his books. In response to this, the radio host among other things said: “That’s why society goes to hell. Being gay today and crying it out loud is considered a cunning behaviour and not a problem.”

Verykios’ outburst seems to be only the tip of the iceberg. Homophobic stereotypes and discrimination based on sexual orientation is widespread in Greece, both on state level and in wider society. The 2013 annual report by the European arm of the international gay right organisation ILGA, reports a wave of violence directed at the LGBTI community by extremists, ranking Greece 25th out of 49 European countries for gay rights. In 2012, European Commission against Racism and Intolerance urged Greek authorities to raise awareness “on the implementation of the principle of equal treatment regardless of racial or ethnic origin, religious or other beliefs, disability, age or sexual orientation”.

The extension of legislation (institution of civil partnership) to same sex couples has “frozen” because of continuing pressures from the Greek Orthodox Church, while at the same time the country has been found violating the European Convention of Human Rights. Index has previously reported on homophobic behaviour and attacks by Golden Dawn and its supporters. Firstly, regarding the persecution of people involved in the play “Corpus Christi” and secondly, regarding the mockery of journalist Tasos Theodoropoulos by the far-right publication called “Stohos”, and the subsequent attack on him.

Electra Leda Koutra is the president of the NGO Hellenic Action for Human Rights and lawyer for the Greek Transgender Support Association. She was harassed by policemen and illegally detained for a short while last June for trying to communicate with her transgender client. “Many cases do not reach the courts because of the ‘outing’ that the victims would have to unwillingly go through during the legal procedure,” she explains to Index, adding that many of these cases often go unresolved.

Verykios outburst was answered by a collective complaint from the LGBTQI community — nearly 20 organisations and collectivities took part — to the National Council for Radio and Television (ESR).  The president of ESR, Ioannis Laskaridis, said told media that the volume of complaints filed was “unusual”.

Corteau is suing Verykios over the statements, posting on his Facebook page that: “I have decided that I have a duty to stand up for and protect the people I love and then any person that could find themselves in my position, a target of the poisonous language represented by Mr Verikios.” Corteau’s lawyer Christos Gramatidis explained the nature of the legal action to Index: “It is the first lawsuit of its kind (compensation for moral damages, eponymous opposing parties) based on the basis of attacking personality and consisting of libel and insult of gender identity. As a country we haven’t incorporated yet the European legal framework of combating intolerance”.

Gramatidis added: “There are so many people from the LGBTI community who accept bullying in schools and elsewhere in society but they do not have the ability to go into court.”

This article was published on 7 April 2014 at indexoncensorship.org