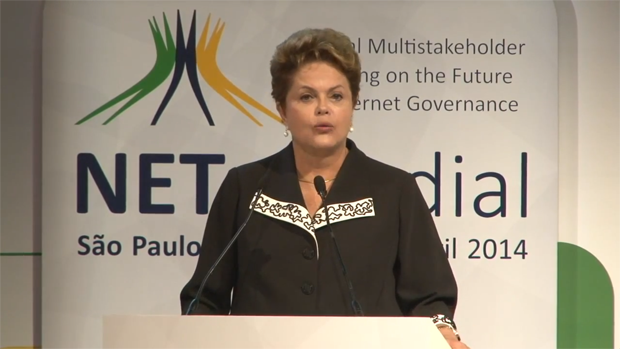 Brazilian President Dilma Rouseff spoke at the opening of NETmundial.

“In 2013, the revelations about the comprehensive mechanisms for spying and monitoring communications provoked outrage and disgust in broad sectors of the Brazilian and the world’s public opinion. Brazilian citizens, companies, embassies and even the President of the Republic had their communications intercepted. Such facts are unacceptable. They undermine the very nature of the Internet: open, pluralistic and free”.

With these words, President Dilma Rousseff opened the NETmundial – Global Multistakeholder Meeting on the Future of Internet Governance, held in São Paulo on April 23 and 24.

Organized by the Brazilian Internet Steering Committee (CGI.br) and /1Net, the unprecedented gathering brought together 1,229 participants from 97 countries. The meeting included representatives of governments, the private sector, civil society, the technical community and academics. Among those present were the Under Secretary-General of the United Nations, Wu Hongbo; the President of ICANN (Internet Corporation for Assigned Names and Numbers), Fadi Chehade; the “father” of the Web, Tim Berners-Lee, and the co-author of TCP/IP and vice-president of Google, Vint Cerfol. The creator of WikiLeaks, Julian Assange, attended the event via Skype.

The words of the president of Brazil seemed to indicate the tone of the meeting: “This reunion responds to a global desire for change in the current situation, with the systematic strengthening of freedom of expression on the internet and the protection of basic human rights, such as the right to privacy”.

In the audience, activists wore masks with the face of Edward Snowden, whose leaks were a catalyst for NETmundial. They protested against the Article 15 of the Marco Civil–signed into law by Rousseff at the event’s opening ceremony–which orders the retention of users’ browsing data. Some demanded that Brazil offer asylum to Snowden.

The main objective of NETmundial was to begin to formulate a system of international internet governance that will come into effect in September 2015, when the United States steps away from the coordination of ICANN, which administers and manages the names and domains used on the internet.

NetMundial was born thanks U.S. spying that targeted the Brazilian government. Rousseff personally stitched together the event after her speech at the UN General Assembly last year that strongly condemned the NSA spying.

After the meeting, a statement of principles was approved. However, the document does not clearly state any principle governing the massive data espionage or violation of privacy. The term “neutrality” appears only in the list of topics to be discussed in the future. The mass surveillance is identified only as a discrediting factor of the net: “Mass and arbitrary surveillance weakens the trust and the confidence in the internet and in the ecosystem of internet governance”, says the document. The collection and use of personal data “should be subject to international human rights law”. And nothing more. Without incrimination, without any preventive or corrective measure, the question remained open. The postponement of the discussion about net neutrality was advocated by the U.S. private sector.

The final document raised much criticism from civil society, which had their expectations disappointed. With a weak text, the Charter of Principles was more like a set of corporate standards, with little affirmative language, full of marketing buzzwords. Its statements are soft. The governments’ voices, especially the U.S.’s, sounded much stronger. Civil society condemned the lack of explicit rules for the “net neutrality” – the term, by the way, was not even mentioned. Another criticized point was the inclusion of protection and copyright of intellectual property, which meets to the interests of lobbyists from business environment and is contrary to the recommendations of collaborative and free creation.

“The document ended up not reflecting the greatness of the debate that happened here. We missed the chance to produce a substantial document to the discussion of the internet governance”, said Laura Tresca, from the NGO Article 19. “The positive balance is in the process, which was interesting: we experienced the idea of the multistakeholder model in practice; but the final document was too weak.”

EFF published a text that defined the outcome of the meeting as “disappointing”.

The multistakeholder model was criticized by activists as “oppressive, determined by political and market interests”. People like Jérémie Zimmermann (La Quadrature Du Net, which defends the rights and freedom of citizens on the web) and Jacob Appelbaum (developer and security researcher) said that the principles of NetMundial were “empty of content and devoid of real power”. These activists argue that governments have an obligation to ensure the rights of users and that the internet is a common, free and geared to citizens’ good.

It would be very difficult to have unanimity with so many sectors present. Russia, Cuba and India disagreed with the Charter of Principles. Brazil’s minister of communications, Paulo Bernardo, missed a more forceful condemnation of espionage. “For obvious reasons, the United States was uncomfortable with it”, said Bernardo. He recognized that the document is not perfect, but evaluates that it means a victory for the future of governance. The idea now is to enhance the text in other debates, such as the Internet Governance Forum (IGF), that will be held next September in Turkey and in Brazil in 2015.

NETmundial was a historic step putting Brazil in the frontline for internet use in the world, even with the disagreements and a questionable model. Nevertheless, it lacked the courage to allow the voice of the people to sound louder than economic interests. To push the most important issues into the future for further discussions was a mistake – both strategic and purposeful. In this sense, they have bitten more than they could chew.

This article was published on April 30, 2014 at indexoncensorship.org