NEWS
Art for Democracy: Artistic freedom of expression in Azerbaijan
12 May 2014
BY MELODY PATRY 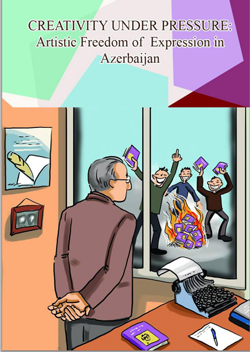 Creativity Under Pressure: Artistic Freedom of Expression in Azerbaijan (PDF)

As Azerbaijan is about to assume the Chairmanship of the Council of Europe Committee of Ministers, a new report details cases of violations of the right to artistic freedom of expression over the past three years in the country.

According to the report, the Azerbaijani authorities have used a range of tactics to silence critical artistic expression, including harassment, intimidation, threats, interference, legal pressure, arrest, imprisonment, and torture.

The report, Creativity Under Pressure: Artistic Freedom of Expression in Azerbaijan, is published by the Baku-based Art for Democracy campaign. Art for Democracy is a campaign that uses art to promote democracy and human rights in Azerbaijan. The group has faced significant pressure since its launch in December 2012, including the attempted launch event for this very report, which has been cancelled by three hotels in Baku.

Index on Censorship is posting the report on its website as Art for Democracy’s new website, www.artfordemocracy.net, has faced a hack attack shortly after being live and is not currently functioning.

Despite the fact that Azerbaijan has committed to respect and protect the right to artistic freedom of expression, in practice, the Azerbaijani authorities restrict this right, particularly with regard to alternative artists and artists considered to be critical of the government. The ability of these artists to perform, display, or disseminate their work is limited through direct and indirect means. As a result, few artists remain willing to publicly express critical views or use their work to explore controversial themes, and those who do face serious consequences.

The report is divided into three chapters. The first chapter sets out international standards for artistic freedom of expression, which Azerbaijan has committed to protect and respect through its membership in a number of international organizations and its ratification of or accession to international treaties.

In publishing this report, the Art for Democracy campaign hopes to draw greater awareness, both within Azerbaijan and at the international level, to ongoing restrictions of the right to artistic freedom of expression in Azerbaijan, and in that regard, to improve the situation in the country.

To that end, the report contains a number of recommendations to the Azerbaijani authorities for concrete steps needed to improve the situation of artistic freedom of expression in the country. Among these are the need to cease politically motivated arrests of persons in connection with their exercise of the right to artistic freedom of expression; to conduct serious and independent investigations into reports of torture and calls for violence against artists; to cease practices of censorship and dismissal of artists working for state bodies; to cease practices of discriminatory treatment of critical and alternative artists; and to decriminalize defamation.