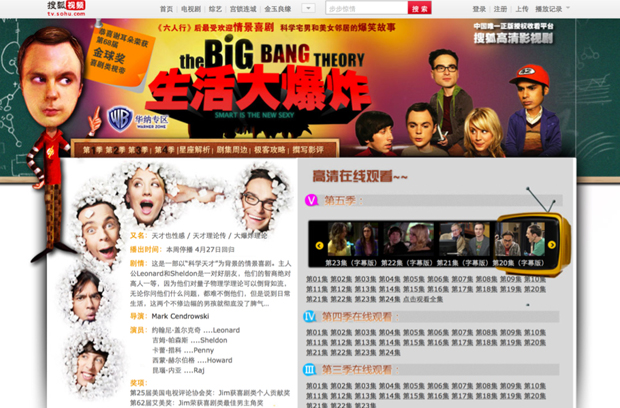 Chinese fans of American TV have been dealt a serious blow after some of their favorite shows were removed from the country’s main video streaming websites. On Saturday, The Big Bang Theory, The Good Wife, NCIS and The Practice all disappeared from the sites of Sohu TV, iQiyi and Youku. Immediately after, fans took to online forums to voice their disapproval. Netizens lashed out at the government, referring to China as “West North Korea,” a phrase that was quickly blocked from online searches.

No one knows exactly why the government has ordered the shows offline. Others, such as House of Cards and Breaking Bad, both of which have gained huge followings in China and present darker material, remain unscathed. Speculating in the state-controlled newspaper Global Times, leading film critic Tan Fei argued that “the machetes the monitoring departments waved to the U.S. dramas are not only aimed at protecting teenagers’ physical and mental health but, on a deeper level, are aimed at protecting our weak domestic film industry.”

Of Fei’s last point, it’s worth noting that until recently, the main video providers have been free to broadcast shows without the hurdle of obtaining official approval. China’s TV stations, by contrast, are heavily restricted when it comes to content. Poorly acted soap operas and over-the-top dramas about corrupt emperors and the Sino-Japanese War are the mainstay of these channels. As a result, viewers have fled to the more free and entertaining realms of online TV.

In order to lure people back, state-owned television channels have started to broadcast some of the same shows as Chinese streaming platforms, albeit censored versions. China’s national TV broadcaster CCTV will soon air The Big Bang Theory and has recently introduced a dubbed version of Game of Thrones to its paid channel.

Li Bingwen, who has worked for Chinese state media and is now at a western publication, watches a range of popular US shows, including the ones that have been removed. For Li, who tells Index that Chinese TV shows make him “doze off”, the latest government move is “cynical.”

“Forcing video web sites like Youku.com to remove The Big Bang Theory from their play lists is the most cynical act by Chinese censors ever. Banning speech for ideological reasons is evil but understandable. Taking a show off the site of a private company just so a state-owned broadcaster can air it is the new height of hypocrisy.”

Commerce doesn’t explain the move entirely though. The development comes as the government is tightening control of all areas online, particular the areas that attract the most attention, which these shows do.

“There’s been a tendency for the government to treat different forms of communication differently when it comes to censorship, being most restrictive about the media that reach the broadest spectrum of people,” explained Jeffrey Wasserstrom, a prominent academic and author of China in the 21st Century: What Everyone Needs To Know.

“The internet was seen for a time as having less broad a reach than film and television, so you were given more latitude for what you said online as opposed to in a television show. Now, of course, streaming content and growing numbers of people who go online regularly blurs that distinction,” he added.

While people of all ages within China watch these shows, it is the youth who tune in the most, and are therefore the most affected. On top of making up the biggest proportion of online users, the under-30 demographic are particularly drawn to the themes of the shows, and disillusioned by those themes presented on Chinese TV. For example, the story of science geeks trying to find their way in the world post graduation, as is illustrated in The Big Bang Theory, resonates with millions of young Chinese. With the job market in China becoming fiercely competitive and living costs soaring across major cities, graduates are now finding their dreams scuppered, much like the characters of this show.

Today’s Chinese youth also see US and UK shows as windows to foreign cultures, and more importantly, as exercises in English. For many of these people then, who might be politically apathetic, or at least profess to be so, the recent attack will be a first direct taste of censorship.

“Moves like this, which limit access to works of western popular culture, are particularly significant for Chinese youth,” Wasserstrom said.

“When people in China go online, as when people in other places do this, they often do so in search not of news but of entertainment and other kinds of non-political things, such as information about restaurants. Being suddenly unable to access a favorite television show is both annoying and a reminder of the prevalence of the government’s ability to exert control over many different aspects of life, when it wants to.”

“If you are really serious, you can find them, maybe on someone’s virtual hard drive that they make accessible to everyone. A friend for example goes to a place to download tons of shows shortly after they air in the US. He is very discreet about that place and he is helping me now.”

Less tech savvy fans will have to await the airing of The Big Bang Theory on Chinese TV and hope it’s not too sanitised. Wang Meimei, another fervent Big Bang fan who Index spoke to, says she’s not holding her breath. She’ll tune in anyway.

“I want to see how much they will ruin a good drama,” explains the 26-year-old curtly.

This article was published on May 2, 2014 at indexoncensorship.org