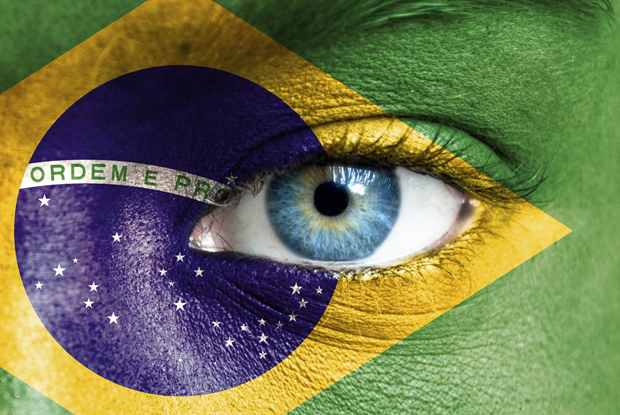 The Brazilian press is “partially free”, according a study made by Freedom House published on 1 May. The study considered the deaths of three journalists in 2013, the attacks on the work of the press in June’s protests, the lawsuits against bloggers and internet companies and a large number of government requests to remove online content. Brazil scored a 45 — on a scale of zero to one hundred, zero being the best scenario.

The attacks and violence are only one side of the threats to press freedom in Brazil. Communication monopolies standardise the views and concentrate the budget and the audience. The leader is Globo Network, which owns more than half of the television advertising market. The concentration of the media and the intimacy of their owners with powerful politicians is identified by Freedom House as “one of the biggest obstacles to media diversity in Brazil”.

Televisions and radios are government grants, and although the law prohibits monopoly, this is a game of power advantageous for both businesses and the government. There are also congressmen who own or control media. Both sides reinforce each other, forming lobbies to protect their fiefdoms’s of versions and truths. Any proposal on communication democratization or regulation is shouted down by these lobbies as an attack on freedom of expression or an attempt at censorship. The Brazilian Telecommunications Code is 50 years old and a target of campaigns of freedom of expression entities.

However, there is not a declared censorship. All the guarantees of freedom of press and information are established in the Constitution and in various laws. What happens is that press freedom in Brazil is fundamentally compromised by political and state interests and private sponsorships, which finance the media. Thus, it is not a lack freedom, but a lack of autonomy.

Since June 2013, hundreds of protests have been shaking Brazil. During many of them, protesters burned cars belonging to the press. What does this mean? The level of dissatisfaction and resentment is palpable. There’s a heartache that turned against “everything-that-is-there”, including how the media covers the facts. The roles of the press and government is being questioned in the streets. Nevertheless, the sound of these voices is muffled in the media.

With the FIFA World Cup, the exacerbated patriotism and the green and yellow colors have taken control over television commercials, selling an artificial enthusiasm. Advertisers such as private banks, state companies, operators of credit cards, the soft drink industry, beers and cars have invested over £350 million for ads on only one station–Rede Globo, the country’s largest. Each advertiser is spending £1.4 million on advertising per day, the equivalent to a daily Super Bowl.

The largest communication network in Brazil has exclusive rights to broadcast the matches and has the official sponsorship of FIFA. Throughout the day, and especially between 8:30PM and 10PM –“the Brazilian primetime TV” –viewers see an exciting commercial film seeking to promote the acceptance of the FIFA World Cup. With the slogan “Somos um só” (“We are all one”), the advertisement shows how television “has the magic to put the entire country on the same vibe”.

The numbers are even more exciting. Only 30 seconds of a primetime ad cost £168,000. There is still the merchandising: the company is the only one licensed to sell FIFA products. About 1,700 items should yield £534 million to the broadcaster. Such numbers do not harmonise with autonomy of content.

Dozens of federal government announcements are also aired on television. One, for example, announces a rich country, with full employment and a promising future. A country with no inflation, social problems or misery-−”A rich country is a country without poverty”, says the slogan, ignoring the economic crisis, electric blackouts, water shortages and strikes. Petrobras ads claim a solid company, with smiling workers, while in practice the company applies a plan of voluntary dismissals and responds to an investigation into allegations of kickbacks.

With an expenditure of £614 million for ads, the federal government was the fourth largest advertiser in media last year; 65% of the total was invested in TV, according to the Department of Communication of the Presidency. The agenda is to suppress the resentment of the people with a shower of advertising. “We love football and are proud to organize the Cup of the Cups. Therefore, all who come to Brazil will be welcomed and will know a multicultural country, with happy and hardworking people”, said President Dilma Rousseff.

Despite the inundation of propaganda, a survey conducted by the Senate in late April found that 76% of the respondents consider that the expenditure on stadiums are larger than necessary; 86% believe that public funds earmarked for the event would have better use in other areas such as health, education and public safety. 42% of the respondents approve of the event, while 40% disapprove – a technical draw. The margin of sampling error is 3.5 percentage points, plus or minus. The research was not even mentioned in the press.

It can be said that freedom of the press in Brazil at this time is restricted. To talk about protests against the World Cup, a journalist must assume a mild tone to avoid displeasing sponsors. Journalists must also prevent the increasing antipathy to the World Cup, which would bring monumental financial losses. The possibility of withdrawn sponsorships generates a cold feeling for the broadcasters and FIFA.

The ball of Brazil is already rolling and it remains unclear what the outcome of this game will be. In the run up to the opening of the World Cup, workers strikes and protests are on the increase in the country. Journalists do not know what people want, but they listen to experts, the police, and the rulers.

Is the Brazilian press partial in the officialism that privileges the voices of the government and the market in exchange for financial benefits, affable policy and high profits?

The Brazilian press is its own executioner.

This article was posted on May 19, 2014 at indexoncensorship.org